Hi, we're Andrew and Sarah Keck. Here's what you need to know: we're newlyweds (or at least relatively speaking we are, as we just hit our one-year anniversary in early August 2012) and we see a lot of movies, both in the theatres and on DVD. This blog is an open discussion movie review between the two of us on what we think about whatever movie we just watched. Occasionally we'll post movie trailers, movie news or try out some new features to give us more avenues to talk about movies! Hopefully you, the reader, will find us entertaining but also informative in giving you two sides of a movie. We hope you enjoy! 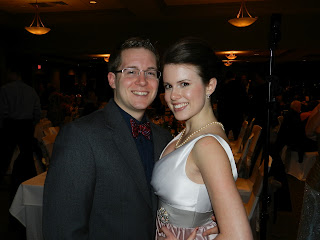 Sarah: A little about how we met...We both attended Central Michigan University in Mt. Pleasant, MI where we each minored in Journalism. I was a Sophomore and Andrew was a Senior when we had our first class together. It was an 8 am Intro to Journalism class, so needless to say it was a rough one for Andrew to make on time.

Except for that first day where somehow he was the first in class. The tables were in the shape of a big U facing the front of the classroom. He took a corner seat closest to the door. I (uncharacteristically) was the last one in class. There was only one seat open and of course it was next to him. After not speaking to me for a couple of weeks, I finally asked him to borrow a pen or something like that. (Andrew's note: Whoa whoa whoa. She didn't ask me for a pencil. I was the first one to talk and my breaking the ice move was to ask where she was going for Spring Break. Go on...) After that we quickly became friends.

It wasn't until almost a year and a half later that we started dating and that was it. We were engaged 6 months later on August 7 in Petoskey, MI (his hometown). A year later on August 6, 2011 we got married in Rockford, MI (my hometown). 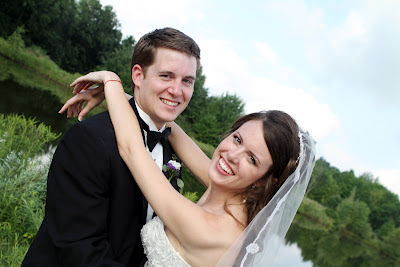 So, that's a little about us so far. There is a lot more story to write, and that's the exciting part!