Another Entertaining Ensemble Comedy, But With Babies!: Our Review of "What To Expect When You're Expecting" (2012) 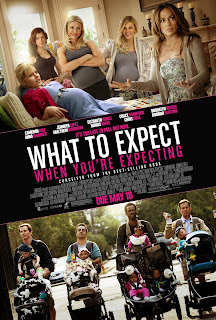 Synopsis: Based on the best-selling pregnancy guide book of the same name, five different couples who are related to each other in one way or another, each experience different aspects of trying to have a baby.

Andrew: Hello readers! Even though the weather outside is absolutely perfect for sitting in the sun and grilling some burgers, Sarah and I hit up the theatre yet again today to see the new ensemble comedy What To Expect When You’re Expecting. (Don’t worry, we’ll do the outside fun today, too.)

Sarah, when we spoke about this movie in our weekly preview a few days ago I mentioned that I was curious to see how this compared to Rob Marshall’s recent ensemble films Valentine’s Day and New Year’s Eve. How do you think What To Expect When You’re Expecting fared compared to those two?

Sarah: I thoroughly enjoyed it! It was fun, it was funny, it was heartfelt, I feel that the cast worked well together, and it even provoked a tear here or there. I think it pretty much hit all the highs and lows of a fun movie! Did you have fun watching it?

A: I wouldn’t necessarily say that I had fun, because some of the things covered in the movie were actually kind of sad, but overall I did enjoy the film for what it was. There were plenty of times where I laughed (though I think most of the funny parts were spoiled in trailers or commercials) and other times where I was just happy with how certain events played out. So I’d say I liked it, yeah.

S: In all these ensemble movies, they usually try to get all of the characters connected somehow. I thought some of the connections were kind of weak, but I’m curious to hear what you think.

I would say the only relationship that I felt was a stretch and should have been touched on more was Anna Kendrick’s (Up in the Air) relationship to anyone in the film. She was almost a stand-alone arc until the very end, and hers felt more forced than anyone else’s.

S: Yeah, Kendrick’s was the one that stood out like a sore thumb to me, too. And in second place was Cameron Diaz’s (There's Something About Mary) television fitness guru’s relationship to Falcone’s Gary. It kinda came out of nowhere.

I will say my absolute favorite part of the movie was “The Dudes.” That ensemble in and of itself worked so well together, that even though they gave away a lot of the funny parts in the trailer, I still laughed at every joke. It makes me hope that a group like that is something that actually exists when we finally decide to have children! That would be awesome.

A: Agreed! The four guys who comprise “The Dudes” are all very funny in their own right and worked well together. Chris Rock (Grown-Ups) in particular stood out amongst them.

S: Another plus for the film, in my eyes, was that some of the directions they took with the character arcs I did not see coming. I won’t say exactly what they are but I liked the range of the stories, who they affected, and how they were handled.

A: True. Ok, now for a little negative point, I do feel that the movie was a little too long and that’s because they had so many characters to work with. There were stretches were some characters weren’t seen for long periods of time and I kind of wondered what happened to them, but that’s a small quibble.

S: That didn’t bother me so much. One of the things I liked about the movie is that it covered almost every aspect you can have with having children. From the easy pregnancy to the very difficult pregnancy, to adoption, to multiple children…it really covered the gamut and I felt that was fun. It gave depth to the movie, and it tied in with what the movie is loosely based on – the book. It really showed that you can’t actually expect any one thing because every pregnancy is different.

A: Good point. Overall, for me, I’d say that I did enjoy What To Expect When You’re Expecting and I feel that it handled all the different storylines well (I especially liked Anna Kendrick’s), and I’ll actually say I liked this more than Marshall’s two films. It’s not a great movie, but it’s not a bad one either.

S: Yeah. I will warn you, Readers, that if you or your loved one/significant other has baby fever, that I would avoid this movie! There are some pretty adorable children in it! And all in all it’s very heartwarming to the idea of having children.

It was cute and I don’t regret seeing it. I’d say that it’s a great way to kill an afternoon. Maybe try to catch it during a matinee. I would definitely say What To Expect When You’re Expecting is definitely a better overall movie than what we saw yesterday, would you agree?

A: 100% agreed. Though I will say that if you disliked Marshall’s two movies, definitely skip this one.
Photo Courtesies: Moviefone, Filmofilia, New York Times
Posted by Sarah Keck at 6:24 PM