Sometimes Magical Yet Incredibly Uneven: Our Review of "The Incredible Burt Wonderstone" (2013) 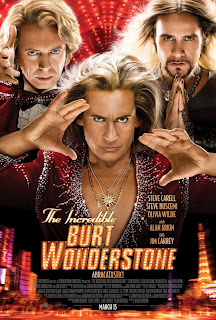 Synopsis: Burt Wonderstone and Anton Marvelton (Carell and Buscemi) are two of the most famous magicians on the Las Vegas Strip. After 10 years though, their show has become stale and their friendship strained, and when an outlandish street magician named Steve Gray (Carrey) comes along to make things worse, it causes Anton to quit the show and Burt loses his job. Resorting to being an entertainer at a retirement home, Burt meets his childhood hero, an old magician named Rance Holloway (Arkin), who combines with Burt's former assistant Jane (Wilde) and inspires Burt to rediscover why he became a magician in the first place.

Andrew: Hello readers! Sarah and I are back from our hiatus now that, for all intents and purposes, I’m finished with this past season of college basketball and my schedule is about to open up. We apologize for the lack of content recently but we can assure you that we’re back and we’ll be coming out with our usual reviews and posts. We might even be able to start cranking out more columns like our New Year’s Resolutions said we would.

All of that said, we kicked off our return by catching a matinee showing of Steve Carell’s new comedy, The Incredible Burt Wonderstone. Carell stars as a Las Vegas magician named Burt Wonderstone…

Sarah: And Steve Buscemi (HBO’s Boardwalk Empire) plays his best friend and partner Anton Marvelton, but their show is getting old and stale and they’re in-fighting is tearing them apart.

A: And then a street magician named Steve Grey, played by Jim Carrey (Kick-Ass 2), comes along and essentially causes Burt and Anton to break up and lose their show.

So all of that said, we’re both pretty big fans of Carell’s, from his hilarious and most famous characters of Michael Scott and Brick Tamland, to his more dramatic acting chops in Crazy, Stupid, Love and Little Miss Sunshine. Needless to say we were looking forward to seeing how his new film is, and now that we’ve seen it, what did you think of it Sarah?

S: Throughout the movie I was a little concerned that it was just going to be another so-so funny movie…..and then the final act came around, which was just fabulous to me. But honestly I didn’t really like most of it. I felt like the pacing didn’t quite make sense and it just didn’t flow as nicely as it could have.

But I loved the finish, and I think that sort of made up for the rest of it. Because I love magic tricks, especially good ones, and while a lot of it was movie magic it was still pretty cool. So yeah…..what did you think of it?

A: I liked it but didn’t love it. I agree with your sentiment that most of the movie is uneven, both the pacing, the character development, the jokes were uneven…I mean there are some really funny bits but for the most part either some of the best stuff was given away in the trailer or it sort of falls flat.

But I agree with you that the final act is fun and it brings things together, but it also drives home the point that the movie could have been a lot better if it had been more like the final act.

S: Right. Like if they had focused more on the magic and the elements of magic, the development of Bruce and Anton’s magic tricks and things like that, it would’ve been pretty cool.

A: The thing to me, too, is that Carell’s Burt Wonderstone is a very uneven character. We first see him as a 10-year-old child who’s mother gives him a magic kit for his birthday and that’s where his love of magic blossoms from along with his friend Anton. Then it jumps ahead to them being grown up as these young, up-and-coming magicians who are just starting with their act and catching the eye of a casino owner named Doug Munny, played by James Gandolfini (Zero Dark Thirty), and then it jumps ahead ten years and Burt has become this jaded and pompous ass and it just…

S: It doesn’t make sense. They don’t explain to you why he’s like that…

A: Or where the change came from…his voice is different from when he was younger…

S: It’s like he’s trying to be suave…it just…what I think it was, was a writing issue. I don’t think the writers knew who they wanted Burt to be. I think might have been a bit of an acting or directing choice, too. And it didn’t work.

Know what else didn’t work for me? I hated Jim Carrey’s character.

S: If you’re going to have a villain that can do more impressive magic tricks than the main character, make them actual magic tricks. Make it more like what David Blaine and Criss Angel can actually do. And I get that it was like a satire on what they do, but it was so unbelievable to me that I had a hard time with him.

A: I didn’t have a problem with it because the film was taking it to an extreme to make fun of magicians like Blaine and Angel. They’re trying to show you how ridiculous those things are, and Carrey’s Steve Gray is doing these things like sleeping on a hot bed of coals which is stupid, just like when David Blaine stood in a block of ice for a few days.

I was okay with it, and I actually thought this was a nice little return to form for Carrey as far as his playing an outlandish comedic character. Again, some of his better parts were given away in the trailer or the commercials for the movie, like when he’s holding his urine for a couple of weeks and a reporter asks him what he’s thinking and he just responds with, “I really have to pee, Richard,” in that classic Jim Carrey kind of way. So I didn’t have a problem with it.

S: I don’t know, maybe it’s because I’m not really a big fan of Carrey’s to begin with.  I think that his over-the-top style of comedy isn’t that funny.

A: If you’re not a fan of Jim Carrey then yeah, you’re probably not going to like him in this movie. I, on the other hand…

A: I do, and so I thought it was a nice return to form and I was happy to see that from him.

S: It was a return to form, I’ll give him that.

A: Real quick, as it just popped in my head while were talking, I think the thing that bugs me the most about Carell’s playing Burt Wonderstone as this pompous d-bag is that once he’s fired he totally changes to more of a normal dude. He speaks with a more normal voice and he becomes more a real person again, especially after he gets a job as an entertainer at a retirement home and meets his childhood hero, Rance Holloway…

A: That’s when I think the movie really takes off, when Arkin comes in. I wish the movie had been more of what it becomes once Burt is humbled and becomes more of a normal guy. I understand why we had to see his relationship with Anton and watch the act deteriorate…

S: But watching Burt do their two-man show all by himself was unnecessary.

A: Exactly. It was tough to watch. And here’s the other thing – I get that they were trying to give Burt an arc and make him a redeeming character, but they needed stick with one version of Burt or the other. Because there are scenes like when Burt is crashing in an apartment and he puts the dinner plates outside the front door like you would a hotel…

S: Which, come on, it’s not like he’s lived in a hotel his whole life!

A: Right! But then there are the scenes where he’s acting like a normal human being and it just doesn’t make sense. You gotta make him silly the whole time or make him relatively normal the whole time, I think. The unevenness of it was disappointing to me.

A: You were disappointed with him??

S: No, not with him. I was disappointed that he was underutilized. I think if you’re going to use a name like Steve Buscemi in a movie like this, give him more of a presence. And I know it’s Steve Carell’s movie, but still…I was a little disappointed and I don’t think they used him to his full capabilities.

A: I’d agree with that. I thought one of the funnier bits in the movie was when Anton goes to Cambodia on a mission. I thought Buscemi’s delivery was great on the comedic bits and he even got me a little misty-eyed when he was reminiscing with a reporter about when he and Burt were kids.

You know who I really want to talk about though, because in my opinion the movie would have been strongest if it was actually about this person? Olivia Wilde (People Like Us) as Burt and Anton’s magic assistant, Jane. I actually think a movie like this would have been better served if it was focused on an aspiring magician...

S: And I wish we had seen more of her magic abilities! I wish that there had been more magic overall.

A: I do, too, because when we first see Anton and Burt’s magic show there are some pretty cool things that we do, like The Hangman, and then obviously their big trick in the film’s climax.

S: Which was AWESOME.

A: So, you know, I liked the film overall but I didn’t love it. I don’t think it’s one we’ll own.

S: I don’t think it’s in line with some of Carell’s better pieces at all.

A: It’s really not. And the sad thing is you can see the moments when Carell’s true talent shines through the other parts…

S: And then it would disappear again and I was like, “Aww, well there it goes.”

A: Steve Carell visited ESPN last week while we were in New York (curses!) and when he went on one of our shows he talked about how this film is a silly comedy like Anchorman: The Legend of Ron Burgandy…

S: I would not compare this to Anchorman at all.

A: Me neither. I understand why he made the comparison, because he was promoting the film, but this is in no way as silly or as funny as Anchorman.

S: It had its silly moments but it wasn’t funny silly. It was more groan inducing.

A: I don’t even know if it was silly. The only silly moments I can think of would be like when Rance does his final disappearing trick…

S: Which is given away in the trailer.

A: I’m glad we saw it because we like Carell, but I don’t think it’s worth seeing in theatres.