Two Tickets For... Ranks All Ten of the Marvel Cinematic Universe Films! 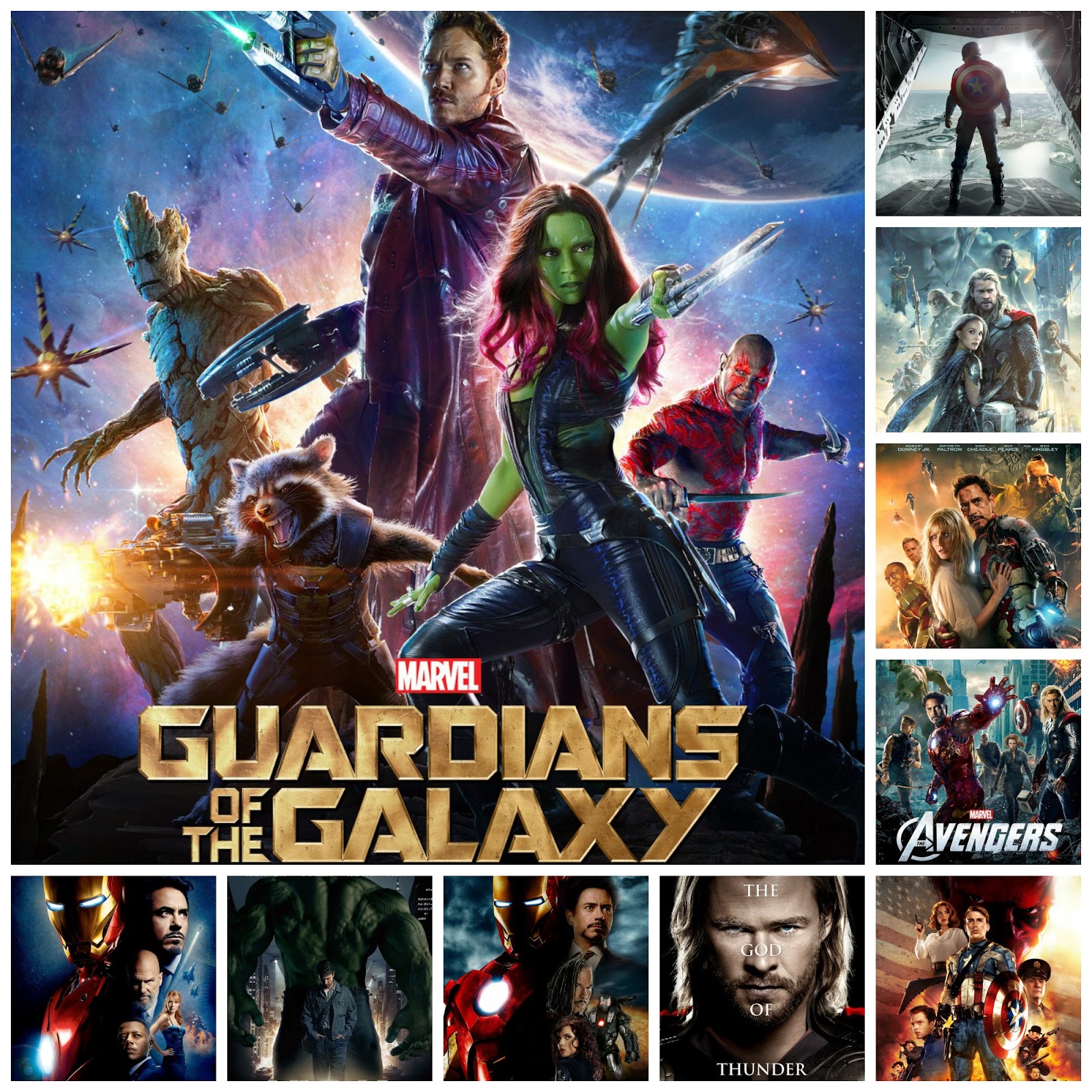 Andrew: Hello dear readers! Last fall Sarah and I posted our personal rankings of the Marvel Cinematic Universe films that had been released up to that point, save for The Avengers, because we knew it would top the rankings. Since that post, Marvel Studios has released three films - Thor: The Dark World, Captain America: The Winter Soldier, and last week's Guardians of the Galaxy - bringing the grant total of MCU films to a nice, round ten films.

With that in mind, we decided it was perfect time to revisit those rankings to include the three aforementioned films, plus we're including The Avengers this time. As a reminder, when we say the "Marvel Cinematic Universe" we're talking about the films that Marvel Studios themselves, the ones they actually have the rights to make films of; so no Spider-Man films (Sony), no X-Men or Fantastic Four films (20th Century Fox), etc.

Check out our lists below, starting with Sarah's personal rankings!

10.) The Incredible Hulk
I’m not going to lie, I actually thought that this movie wasn’t even connected to the rest of the Marvel movies. That’s how much this movie is forgettable. It’s sad really, because the only thing that connects this movie to any of the others in the Tony Stark cameo during the credits. And since they’ve replaced Ed Norton with Mark Ruffalo it’s even more of a throw away film.

9.) Iron Man 2
The more I look back on this movie the more I realize that it just wasn’t as good as it should have been. This movie was just lacking in pretty much everything from good action to a strong bad guy. I recently caught part of the beginning of this movie again and the comedy was so cheesy that it fell flat. Such a shame.

8. Iron Man 3
I’m going to defer to my original thoughts of this movie: I still don't quite understand why I didn't like this one. Until we watch it again, I'm going to stick with I think I was just in Iron Man overload and was little tired of the kitsch.


7.) Captain America: The First Avenger
I liked this movie. It was a solid origin story and one that I had fun watching. Once again, the bad guy was lacking even if it was Hugo Weaving, but I don’t hold that against it too much. Cap is a great character and I think that he was cast very well. But…

6.) Captain America: The Winter Soldier
…this movie delves better into his story. His abilities are sharper and even though it doesn’t take place during his actual time period I think it bridges the two nicely. Since we are post-Avengers in this movie there are a lot of new feelings going on with S.H.I.E.L.D. and it’s actually pretty cool. It really shows the agency side of the whole Marvel universe and not just the super hero stuff. I really liked that. And it introduces a bad guy that looks to have a lot of promise.

5.) Iron Man
This movie was just fun. It introduced us to the Marvel world that Disney created and the reviews were very positive. Once again, it was a strong origin story that brought that comedy that would carry throughout the Marvel world. It also cast the perfect character to play Tony Stark and to kind of be the face of the brand.

4.) Thor
Yeah, I’m going to stand by the whole “Thor is super sexy” motto. That’s pretty much the best thing this has going for it. That, and an awesome cast and director.

3.) Thor: The Dark World
Was it possible for him to get sexier?! Why yes, yes it was. This movie had that, some amazing action and Loki with long hair! But seriously, it had so much heart as well. It really tapped more into the family dynamic on Asgard and was kind of a great brothers film. And did I mention the action? I did? Okay, good.

2.) The Avengers
It’s a tough call between my numbers one and two. The Avengers just had the awesomeness of finally getting all these characters together and kicking some alien ass. I really liked how it showed that these guys weren’t the perfect team right off the bat. It showed that they had to learn from each other and make some compromises to be able to work together to beat evil, or at least put it at bay.

1.) Guardians of the Galaxy
We said it in our review and I’ll say it again here; when you make me laugh as much as this movie did, you’re going to be an automatic winner. Now, I will say that I think I am a little biased because we have seen it most recently. But it’s still a fantastic movie and definitely left me excited about the movies to come.

ANDREW’S RANKINGS
10.) Iron Man 2
Too much world-building here, bottom line. Iron Man 2 never felt like it’s own movie, but instead it’s a bridge from the first Iron Man to The Avengers. Fine cast with the additions of Sam Rockwell and Mickey Rourke, but honestly there’s no real reason to see this film to get a scope of the MCU other than meeting Scarlett Johansson’s Natasha Romanov/Black Widow. Hench, it’s still the bottom.

9.) The Incredible Hulk
Maybe it’s cheating, but I’m just going to repeat what I said last time: “I liked the casting of Edward Norton, Tim Roth, and William Hurt but it just didn't come together for me. I only put it above IM2 because it's not a BAD movie per se, just not a very good one.”

8.) Captain America: The First Avenger
In what is going to be a theme with my rankings, it’s not that I don’t like Captain America: The First Avenger, it’s just that while it does a LOT right, the films that came after it have been even better. Or at least, more fun for me to watch. Great cast (Tommy Lee Jones, Hayley Atwell, Hugo Weaving and Stanley Tucci) and a great throwback feel thanks to the script, director Joe Johnston and the star, Chris Evans. But the Phase One films have been improved upon, plain and simple.

7.) Iron Man
It was the first. Robert Downey, Jr. being cast as Tony Stark was maybe the greatest casting stroke in film history. It alternates between being awesomely comic-y while having some roots in the real world. Fact of the matter is Marvel has created such a successful and entertaining brand that, through little fault of it’s own, Iron Man gets pushed this far down. Oh, and Obediah Stane (Jeff Bridges) is still kinda wasted in an overly hammy villain/meh climactic battle.

6.) Iron Man 3
Shane Black writing and directing for RDJ was more than enough for me to love this movie. Does it rehash stuff from the previous two films? Sure. But IM 2 isn’t very good and as mentioned above Iron Man is good but was the first in a line of MCU films that had weak villains. Oh, don’t get me wrong, Aldrich Killian isn’t awesome, but I love the Mandarin twist. So sue me.

5.) Thor
Pretty much everything I said last time holds true here (“Every role in this film is perfectly cast…It's fun, it's emotional (the scene where Odin banishes Thor to Earth is heartbreaking to me), it's a gorgeous film to watch, I love the music…”). The only difference now is that since we last posted these rankings Marvel has released 3 more films, and they were increasingly better. I still love you, Thor, but you’re not my favorite anymore. Sorry.

4.) Thor: The Dark World
I’m honestly a little surprised that we both have the second Thor film this high, and I can understand some people’s arguments that it belongs in the bottom half of any MCU rankings, but dammit I don’t care. Just like with the first one, I had a blast watching the action and relationships revolving around Hemsworth’s Thor and Hiddleston’s Loki. We saw more of the universe these characters inhabit, and while the Dark Elves and the Aether might be weak villains and a weak MacGuffin, the key to the film is the relationships and improved action from director Alan Taylor. Taylor does great stuff in the episodes of Game of Thrones and Mad Men that he's directed, and his addition was a welcome one to the MCU, in my opinion. And how about that cliffhanger??

3.) Captain America: The Winter Soldier
Just a fantastic movie. Chris Evans continues to make his film version of Steve Rogers/Captain America one of the best characters in comic book movie history. His relationships with ScarJo’s Black Widow and Anthony Mackie’s Falcon are some of the most believable we’ve seen, and damn the action is good here. Like, REALLY good. The Russo Brothers might have been an odd choice to direct because of their comedy background, but they nailed it here. I also can’t leave out how great the political thriller aspect and presence of Robert Redford is, or how important this film is to the future of the MCU.

2.) The Avengers
What do we really need to say about this movie that hasn’t already been said? When we last ranked the MCU films we purposefully didn’t include this film because we knew it would top the rankings, leaving no mystery to the number one film. And while it does SO many things right and is just so much FUN to watch, the only reason I knock it from the top spot is because Marvel’s latest film was even MORE fun to watch from start to finish. (Let’s be honest, the first 20 minutes or so of The Avengers is still tough to watch at times.)

1.) Guardians of the Galaxy
If you read our review of Guardians, it should be no surprise to see this top my personal rankings, just like it did with Sarah’s. You can make a strong argument why this doesn’t belong in front of The Avengers, or maybe even in the top half, but wow did we enjoy the ever-living crap out of this movie. Start to finish it had me smiling, laughing, having all the feels, and so on. James Gunn did really well here even if the action scenes maybe aren’t the best in the MCU. Oh, and the cast is top-notch. We cannot wait to see these guys cross paths with The Avengers. I’m sure when that happens that film will take this top spot.

S: So those are how we stack up the MCU films as of today! We're sure there's plenty you may not agree with. How would you rank the MCU films, readers? Let us know in the comments section!
Posted by Two Tickets For... at 4:15 PM