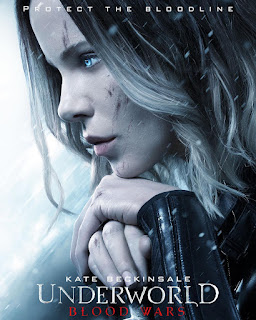 A: Surprisingly I do think you're being a little critical, which sounds funny considering we're talking about an Underworld movie. But here's what I mean: I totally agree with you that there's a LOT of exposition early on in the movie, and yet...that's par for the course with these films.

Think about the first one. There's TONS of exposition going on to explain the world these films inhabit. The second film isn't as talky but still has plenty of people talking about elder vampires and whatnot. And then Underworld: Rise of the Lycans (which is the only film in the series that Kate Beckinsale isn't in) seemed to be quite dialogue-heavy, too, if I remember correctly.

I've always found the Underworld films to be a bunch of people talking about the ongoing war between vampires and Lycans and they just happen to be interrupted by moments of bullets flying everywhere. That said, I did think the new film had maybe too much exposition because it was trying to remind people of what happened throughout the series since it's been five years since the last film came out.

I was actually kinda glad they were giving me the backstory. They were also introducing a new villain in Marius (Tobias Menzies of Game of Thrones and Outlander fame), so they did their usual thing in explaining how bad the bad guy was.

S:  I think the biggest problem I had with all the chatter was that there wasn't a huge payoff with the action. And was it just me or did Kate seem to take a back seat? I could definitely be being overly critical, which is ridiculous because these movies are supposed to just be fun.

I loved the cast in this movie but it was almost like it was a filler episode to lead to the next film. Sort of like a clips episode in a TV show. It also didn't focus so much on Selene but the downfall of the vampire covens and the change-up of power. I did think Lara Pulver (of Sherlock fame) was a great addition but I thought she could have been way more badass.

Again, I may be being way critical. I just felt like I was being force-fed a story that was too overcooked. It was trying too hard.

A: I think you make a fair point that Selene took a bit of a backseat to other things going around here. She does have a couple nifty action sequences of her own, but there are a couple times where she's pretty much sidelined and those aren't necessarily the better parts of the movie.

I also agree with your sentiment that this felt like a bridge episode. There isn't really any closure here, but that probably shouldn't be a surprise as they've already announced they're going to make a sixth (and apparently final) film in the series. Still, it could've used a bit more substance to make watching this entry more worth it.

Since you brought up Lara Pulver, who I also thought did a nice job here, can we talk real quick about how awesome it is that Charles Dance - freaking Tywin Lannister - is a part of this series?

S: The franchise needed a replacement for Bill Nighy's Viktor from the earlier films and I think they nailed it with Charles Dance. I know he was in the last one but we got to see him have a softer side (relatively speaking for a vampire) this time around, which I liked. These movies love to focus on forbidden love and that theme continued here.

Call me sentimental, but I really miss Michael Sheen's Lucius in the Underworld movies! While it was fun to see so many GoT actors show up, Tobias Menzies was a little bit of a let down for me. He didn't really have much to do and lacked the 'sexiness' other actors in the series have had. And let's be honest, that's what these movies are: sexy vampire movies.

A: That's a good point. Is Menzies really supposed to be sexy? Is he sexy in Outlander? Because he certainly isn't in Game of Thrones!

Regarding Michael Sheen, I definitely feel like he and Bill Nighy added some weight to the movies they were in, but let's be fair: they were only really in the first and third films. Hence why it was good that they tapped Charles Dance to fill that void as best he could.

The last thing I really want to talk about because it's both a good and bad thing in this film is the creature design. One of the absolute best things of the earlier films was Len Wiseman's insistence on using practical effects when possible. So in the early films there's plenty of practical makeup effects for the Lycans, which you and I know were designed by Patrick Tatopoulous (and whom directed Rise of the Lycans, in fact).

The further along we've gone in the series the more they rely on CGI to create the Lycans, and sometimes it just does NOT look good. For instance there's a scene in Blood Wars where Marius fights Selene in mid-transformation and it just looks....off. Right?

S: That was such an odd scene! Spoiler alert, but we have seen what happens when Lycan and vampire blood mixes already! And that was definitely NOT what it looked like! It was like a weird hybrid mix of something from a bad Jekyl and Hyde film. If anyone has seen Kate Beckinsale's other monster action flick, Van Helsing, it was on that level of bad CGI. And we have come so far since then! It was like all the budget was spent on leather body suits and bullets and not enough on, arguably, the biggest reveal in the movie. It was almost silly, which I don't think they were going for.

A: Ok, so let's wrap this up. Overall what are your final thoughts on Underworld: Blood Wars? And how does it stack up compared to other films in the series?

S: Personally I think it was the weakest of the franchise. I didn't LOVE Awakening but I think it was better that Blood Wars. These movies are usually a lot of fun for me, but it left me feeling "meh." And yes, I realize that the Underworld movies aren't meant to be Oscar nominated films but I do expect to be entertained and I was a little let down. But it did look pretty (sans CGI characters) and I am curious to see the next one, which means that overall it did its job. What about you?

A: I didn't think it was one of the better entries in the franchise, but I'm not sure if it's the worst. I'm still not the biggest fan of Rise of the Lycans but that could just be because it's tonally different from the others since it takes place in the distant past instead of the present like the others.

That said I enjoyed myself fine enough. I was entertained, if not thoroughly so. I like that Beckinsale keeps coming back for these because I think it's great that she has one of the few female-centric action franchises in Hollywood (the Resident Evil movies being the other, and those just plain suck).

I also like that this entry was directed by Anna Foerster. There's been a lot of talk the last few years about why there haven't been any female directors doing Marvel films or Star Wars films, etc. so I'm glad Foerster got the chance to step in and direct a film about a strong female action character. (For what it's worth, while looking at Foerster's IMBd profile I see she's directed a number of episodes for Outlander, so I see where Menzies' connection comes in now.)