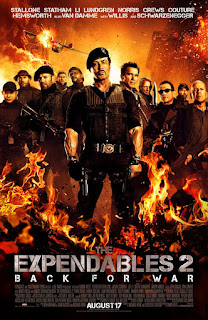 Directed By: Simon West (Con Air)
Starring: Sylvester Stallone, Jason Statham, Jean Claude Vanne Damme, name an action star from the past 30 years and he’s probably in this
Rating: R for strong bloody violence throughout
Run Time: 1 hour, 42 minutes
Synopsis: Barney Ross (Stallone) and his crew of mercenaries, The Expendables, are called into action and sent to Bulgaria to recover sensitive information that went down with a plane. When they run into a competing mercenary named Vilain (Van Damme) and their mission goes awry, Ross and his boys go looking for vengeance.
REVIEW
Sarah: Andrew is still away on work,but did he got the chance today to see The Expendables 2, starring just about every big action star of the 1980s and 90s with Liam Hemsworth thrown in for good measure. I mean they have to throw at least one young actor in there to get some of the younger crowd. This is not a movie that I will be seeing, one because I didn't see the first and two because it just doesn't really appeal to me.
But, Andrew, you've seen the first one and thought it was a fun action movie. What did you think of this new one?
Andrew: It was exactly what I was expecting. It was bigger, louder, bloodier and more explosive than the first one, often times in quite ridiculous ways, and I enjoyed it for that! To be quite honest the first film is altogether forgettable after you've seen it other than Dolph Lundgren (Rocky IV) blowing the top half of some dude away with a big-ass gun. And I feel like it'll be the same for me for this sequel. But there are a lot of enjoyable moments in it.