Wholly Unnecessary Unless You Love Kate Beckinsale: Our Review of "Total Recall" (2012) 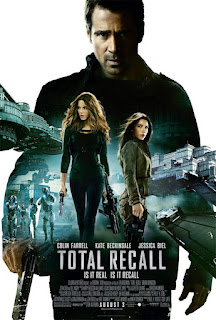 Synopsis: Doug Quaid (Farrell) is a factory worker who wishes for a better life for him and his wife, Lori (Beckinsale). After a recurring dream where he's a spy working with another woman (Biel), he goes against the advice of a friend and visits Rekall - a business that can give you false memories for entertainment. Before he can get  a spy memory implanted in him, all hell breaks loose as it appears he truly is a spy, his wife turns into an intelligence operative who tries to kill him, and he joins forces with his dream girl. But what is real and what is Rekall?

Andrew: Hello readers! Tonight Sarah and I hit the theatre to catch Len Wiseman’s remake of the classic 1990 Arnold Schwarzenegger film Total Recall. This time around we get Colin Farrell in Arnold’s lead role of Doug Quaid; Kate Beckinsale as Lori, Quaid’s wife (or is she) originally played by Sharon Stone; and Jessica Biel as Melina, a woman who may or may not know who Quaid really is.

Sarah, this was the main film we previewed this week, and I’m the only one of us who has seen the original version directed by Paul Verhoeven, so I have some bit of reference to go off of here. But you haven’t seen the original so you kind of went into this fresh. So I want to get your take on what it was like going in having no knowledge of it other than what you’ve seen in promotions. (FAIR WARNING, SPOILERS AHEAD IF YOU HAVEN'T SEEN EITHER VERSION)

Sarah: I went into it not having super high expectations but I was kind of excited to see it because it seemed like a cool action flick. I was thinking it was going to be a cerebral thriller, not knowing what was real and what was fake. It was definitely what you said it would be in the preview – a gun-slinger movie. It was very action-packed. There was actually very little of the movie that was NOT action-packed. Which for a Len Wiseman movie you come to expect.

A: What about the actors and their roles?

S: There are a lot of big name actors and I feel like they completed underutilized some of the bigger names. Bryan Cranston, Bill Nighy…the two guys I guess are considered the villains in the film and they’re very underutilized. That upset me.

And you have Farrell’s character, who is supposedly a double-agent, but you never get the sense for who he is. So it’s like, well no wonder he doesn’t want to get his memories back. We don’t know anything about it. Ugh…so overall I guess I was just disappointed.

So I think I was just disappointed, because there wasn’t much of a storyline. There WAS a storyline but it wasn’t very strong and they didn’t focus much on it. I wish Wiseman had gone further into the resistance that is fighting against Cranston’s Cohaagen.

A: I totally agree with you that my prediction of this being more of a mindless action flick was spot on. I think Wiseman took the concept of the original and the short story it’s based on and just did what he does with his films. He made it very action-driven.

I agree with you – I think they should have delved more into the cerebral aspects of “Is he a secret agent or isn’t he?”

A: Exactly. And they kind of…they do that for a bit and the best section of the movie is from the beginning to when Jessica Biel comes into the picture. They had me hooked and I’m pretty sure they had you hooked, too, but from that point on it becomes straight up action. Some action pieces took too long, particularly the car chase sequence…

S: Where Biel comes in, absolutely took too long.

A: And it’s just that they basically come out and say (SPOILER ALERT), yes, Quaid is a spy who’s real name is Carl Hauser…

A: Yeah, there’s maybe one scene where a co-worker of Quaid’s is sent in to try and convince him he’s still at Rekall. But by that point they had given away too much.

S: And they you hope at the end, or at least I was hoping at the end (SPOILER ALERT AGAIN) that Quiad would wake up and be at Rekall and that it was all just a dream. Because at the beginning when he’s at Rekall the juice DOES go into his arm. But they don’t do that. In fact, it just ENDS.

A: Yeah, that was a terrible ending.

S: I just wanted so much more. I wanted it to be so much better because they HAD the elements there, and it wasn’t. So I was disappointed.

A: I wasn’t a fan of the ending here at all because unlike in Verhoeven’s version, they don’t leave it grey at all. At least in the original there’s still the possibility that none of it was real. But that’s not the case here.

This version is too actiony for my liking. And yes, Cranston isn’t used to his best strength at all.

S: Because he can play a great bad guy! I really think they wrote his character wrong here.

A: Agreed. And then Nighy might as well not have even been in the movie, same with John Cho. It was nice to see them but they were wasted.

The only actor here that had me going and looked like they were enjoying themselves was Kate Beckinsale. She was the best part of the movie. She chewed it up, I loved her American accent when she was playing Quaid’s wife and I loved her British accent when she was playing Lori the trained killer. She looked sexy, her husband obviously framed a lot of shots to highlight her, it was almost like Total Recall was just a large love letter from Wiseman to his wife.

S: In most of her movies she’s the hero or the love interest or the pretty wife, but here she had the chance to play the villain and I think Wiseman totally did that for her. She still got to kick ass and look fabulous doing it, but she got to play evil, too.

A: So we both really liked Beckinsale. Now all of this stuff said, while we thought there were too many action scenes or that they were too long, the action scenes were all really well done. The film LOOKED great. The landscapes of the futuristic “The Colony” and the “United Federation of Britain” were all amazing to look at. They looked like lived-in settings. So props to Wiseman and his crew for making it look like that.

But it was all too much. It ran too long, particularly some action sequences; we didn’t get to know Quaid/Hauser as much as we would have liked…

S: And also there’s a whole Star Wars like thing where they have a synthetic army attack planned, and then nothing comes of it. They show that Cohaagen is threatening a huge synthetic army attack and that Quaid/Hauser knows how to stop it both because he was a worker in the factory that makes the army and because he knows some secret kill code to stop them all and then it’s a fake!

A: Well I have to say that I actually like that bit. That the kill code to stop the army was a scheme by Cohaagen to find the resistance leader played by Nighy. But immediately after showing that it was a scheme, they fail to execute a good finale.

The thing you just reminded me of though is “The Fall,” the method of transportation the workers in The Colony use to get from former Australia to former England on the other end of the globe. Holy crap…it was cool to see but my God would that never ever EVER work. It took me out of the climax so much. There’s no way in hell ANY mode of transportation, other than transportation, is going to get you from England to Australia…

A: Not gonna happen! And then Biel and Farrell are climbing around the outside of this thing while it’s hurtling through the Earth’s core? If people think it’s ridiculous to see action scenes in movies where the characters are on top of a speeding train, wait until they see this.

S: Yeah, even for a movie about giving people false memories for entertainment, where you have to have some suspension of disbelief, that’s too ridiculous.

A: So overall, what did we think of Total Recall? I’m fairly certain we were both bored halfway through the thing.

S: It was just disappointing. I wanted it to be more like Inception, but instead I got another Underworld movie basically. Nothing wrong with that if I had gone in thinking it wouldn’t have much substance to it, but that wasn’t the case.