Eastwood's Latest Swings and Misses: Our Review of "Trouble With The Curve" (2012) 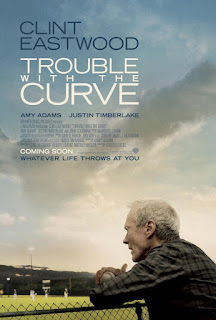 Synopsis: Gus Lobel (Eastwood) is a long-time scout for the Atlanta Braves whose eyesight is starting to fail, is on the verge of losing his job, and is sent to North Carolina to scout a highly-touted prospect just days before the draft. Gus's daughter, Mickey (Adams), joins her father on his scouting trip to possibly help save his job while risking hers, maybe get closer to her gruff father, and meet another scout (Timberlake) who takes a liking to her.

Andrew: Hello readers! We have Sarah’s mother visiting us this weekend and so to entertain her we hit up the local AMC to catch a showing of this weekend’s new baseball drama Trouble With The Curve. This is a film that we’ve seen the preview for a number of times and have been somewhat looking forward to it, mainly because it looks like it has a good cast in Clint Eastwood (Gran Torino), Amy Adams (The Fighter) and Justin Timberlake (The Social Network).

Trouble With The Curve is directorial debut of Robert Lorenz, who is Eastwood’s longtime assistant director, which makes this the first movie Eastwood has acted in that he didn’t also direct since 1993’s In The Line of Fire. So it’s been a while.

All that said, now that we’ve seen Trouble With The Curve, what did you think of it Sarah?

Sarah: It was okay. I’m sure I’ve said this before but I’m not a huge fan of Clint Eastwood. I don’t particularly like his acting style, I think he does best with Westerns and I find everything else he does to be too similar. So I wasn’t impressed with him in this film. He plays the senile old man a little too well for my taste…

A: To be fair, after what he did at the Republican National Convention I don’t know if that’s an act.

S: Good point! I don’t think it’s an act either! So I think that he’s not as good an actor as he once was. I think the story had some flaws, some of which were pretty big. It’s a cute movie, but it’s not much more than that to me.

A: I’m right in the same boat with you. I didn’t go into it with high expectations, but even then it was very predictable and by-the-numbers. It’s nothing we haven’t seen before.

You have Eastwood as Gus Lobel, a longtime scout for the Atlanta Braves who had to raise his daughter, Mickey, all by himself because her mother died when she was 6, so they have father/daughter issues…and some of the best scenes in the movie are between Eastwood and Adams as they try to deal with those issues (particularly a diner scene where she confronts him about something). But even that came out of left field to me.

S: Watching Clint Eastwood attempt to cry on-screen in a tight shot is not something I think audiences should be subjected to. Like you said, the diner scene…the sort-of boyfriend that Mickey has…I guess I get that part of the story because it had to show the audience that she keeps a distance from people…but even then, her boyfriend didn’t come off as a great guy, so I don’t exactly see what the loss was there.

A: Well yeah, that aspect was very underdeveloped.

S: A lot of things were underdeveloped here.

A: The boyfriend was brought in quickly to try and show the audience a different side to her character and it didn’t flesh anything out. It felt very rote to me.

S: Yes! And the biggest thing that I was just like, “What???” was when Gus finally admits to Mickey that the reason he left her with her uncle for a whole year when she was 6 (thereby creating her abandonment issues) was that she was sort of molested as a child in a baseball park when he wasn’t watching her close enough.

A: That was the BIGGEST out of left field moment, for sure.

A: Here’s my thing with that plot development: I think it was fine as part of the plot, but they went about it completely the wrong way. They had flashbacks to parts of when it happened where Gus would dream about the incident or think about it and we only saw bits and pieces of the lead up to it, and you never quite know what he’s thinking about. So when it’s revealed what he was thinking about is that he blames himself for his daughter being molested it’s just like, “Hold up. THAT’S what that was all about?”

If you’re going to go that route, don’t show the flashback stuff. That’s completely unnecessary. Just have him tell her the story. There’s no need to show it. Oh! And then in the flashback Gus beats the guy up? That’s almost completely out of character

S: It doesn’t make any sense.

A: I think it would have worked better if that whole deal was understated and he just told her the story and we didn’t SEE any of that. So that was just one of the many things this film didn’t do well.

The acting in the film, I think, is fine… I liked John Goodman. I thought he did a good job as Gus’s friend and boss.

S: John Goodman was probably my favorite part of the movie. I loved his character.

A: It’s a big year for Goodman! He has this out right now, he has Argo coming out in October and then he has Flight coming out in November.

S: It’s a big year for him, which makes me happy because I think he’s a funny actor. He has that “fat guy love” from me.

S: After seeing her in The Fighter, I know she can bring a powerhouse performance. She can play tough and not always be the Disney princess every time. But here she didn’t have a lot of redeeming qualities, and I think a lot of that is because the script does her no favors.

So I like Amy Adams, I think she has a ton of potential…

A: I’m hearing great things about her in The Master.

S: Same here. She’s a three-time Oscar nominee, so I just don’t think this movie did her any favors.

S: I liked Justin Timberlake. He’s sort of the comedic relief, the levity between the three main characters, as well as being a love interest for Mickey.

S: He went from being in “The Show” to being a scout for the Boston Red Sox to hopefully doing play-by-play for them…

A: And the problem with that to me is that Timberlake does NOT have the voice to do broadcasting. In his character’s introductory scene he does a mock play-by-play while watching a pick-up game of baseball involving kids he doesn’t know and that whole scene felt false to me.

S: I’ll give you that JT’s voice doesn’t sound like an announcer by TODAY’S standards, but he DOES sound like he’d be a good announcer back in the 1920s.

A: He still sounds too young.

A: So that’s just one thing, but another big thing that rang false for me was that the movie clearly looks like it was filmed during the fall. All the leaves are on the ground and the trees are very bare (especially in the cemetery scene), everybody is wearing cold-weather clothes because it’s cold, but a big part of the plot is the fact that the Major League Baseball draft is in just a few days…and that’s held in June!

It’s not like they’re just using a fictional draft or anything, either, because they clearly are working in conjunction with MLB and even use footage of the actual MLB Draft in the film. Plus Gus is scouting this high school player, and high school baseball in played in spring/early summer, so there’s a big disconnect between what we’re seeing weather-wise and what’s supposed to be happening in the plot. Logistically it threw me.

Oh, and during the draft scene, the movie’s antagonist, an assistant general manager played by Matthew Lillard (The Descendents) says that the kid they’re scouting (and that he really wants to draft) is a “five-tool player.” That term mean he’s great at hitting for contact, hitting for power, fielding well, throwing well and running well. Well, we see that the kid has power and can hit the ball, but he’s a huge kid who can’t run fast and looks like he plays third base, so he probably isn’t great at defense. It’s like the screenwriter, Randy Brown, didn’t even do research or know baseball all that well. I don’t know.

S: For being a baseball movie, they don’t do a lot of baseball things well. It’s so factually incorrect and it’s a big flaw. It’s a movie ABOUT baseball, so you know you’re going to be getting some baseball fans coming to see this, and then you miss the mark so many times that it’s just not good.

A: Fair or unfair, it’s tough for me to not compare this to last year’s Moneyball. While a lot of people IN baseball laughed at a lot of things left out of Moneyball, like all the star players the Oakland A’s had that helped them be so successful, Trouble With The Curve also glosses over a lot of baseball things so I’m sure it’ll get nitpicked by other people just like I did.

S: So yeah, I think the overall predictability of Trouble With The Curve did it in for me.

A: It’s not even that it’s predictable, it’s that it’s boring. And that’s the biggest indictment on it.

Ok, well we’re sort of rambling and ranting now so let’s wrap this up. What are our final thoughts on Trouble With The Curve?

S: Predictable plot leads to a slow and monotonous movie. I would say Netflix it on a rainy day. I don’t think you need to see this one in theatres.