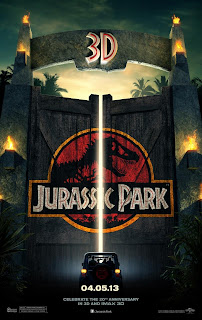 Synopsis: "During a preview tour, a theme park suffers a major power breakdown that allows its cloned dinosaur exhibits to run amok." - via IMDb

Andrew: Hello readers! So a few nights ago Sarah and I decided to go out and check out the 3D re-release of Steven Spielberg’s 1993 classic Jurassic Park. One of the main reasons we went to see it is that, even though we own it on Blu-ray and we’ve seen it tens of times, Sarah had never actually seen it on the big screen plus it has been 20 years since I’ve seen it in theatres when I was just six years old.

So we’re doing this review as a bit of a Retro Review, so first what I want to talk about is what it was like to see it on the big screen compared to how we normally watch it on TV, then to talk about seeing it through the eyes of how we are now compared to when we both originally saw it, and lastly what effect the 3D had on it.

Sarah: What I loved most about watching it on the big screen was that - like when we saw Titanic 3D in the theatre last year, which I had never done before -  you really got what was so ground-breaking and awesome about the movie when it originally came out.

It’s definitely dated now, but you still got that impact of how it would feel to see man and actual dinosaurs interacting. I mean this was a breakthrough movie, a first of it’s kind, so it was cool to get to live that feeling again. It definitely brought back a sense of nostalgia and wonderment that the movie originally had.


A: I think you’re absolutely right. The way you just put it, the nostalgia of it and the wonderment…you used the word “awesome” and I think you actually used it in the original definition of the word – it literally inspired awe in us.

S: Oh that’s exactly how I meant it.

A: It reminds me of the first time I saw Jurassic Park because, again, I was just six years old when I first saw this and I immediately fell in love with it and I fell in love with dinosaurs. I wanted to know everything there was about dinosaurs and I wanted to grow up to become a paleontologist, not unlike a LOT of kids did when this came out. And to see the opening scene with the velociraptor killing the dude it reminded me that I was scared of that scene as a kid!

S: Right! This was a bit of a scary movie when it came out!

A: Absolutely it was! And when Dr. Alan Grant (Sam Neill) first sees the Brachiosaurus, and when he looks over and sees the herds of all the other dinosaurs accompanied by John Williams’ score…

A: It gave me chills all over again, it really did.

S: It’s just most every little boy’s fantasy to get to see dinosaurs. The computer-generated images were getting better and better at the time this came out, and the use of both CGI and animatronics was incredibly impressive.

A: Because originally they were going to use stop-motion techniques for the dinosaurs…

S: Oh that would’ve been awful!

A: But Industrial Light & Magic had just done the special effects in Terminator 2 and came to Spielberg to convince him to use CGI, so Spielberg had them do the Gallimimus scene as a test first and it blew everyone away. So then Spielberg decided that’s the way they were going to go, CGI mixed in with some animatronics created by the legendary Stan Winston, and it was all really ground-breaking at the time.

The other thing to me is, to watch this now as a 26-year-old, and again we’ve seen this countless times before on DVD or TV or whatever, but the difference between watching it now on the big screen in my current state versus when I saw it as a kid, there were SO many things that went over my head as a kid.

Like the lawyer saying they needed to get experts to sign off on the park for the sake of the shareholders; and the father-child dynamics between Grant and the kids, which is very classic Spielberg – a father figure who doesn’t want to be one, or kids who don’t seem to have a father figure – again that all went way over my head as a kid.

A: So it was just interesting to me to see this again like this, because even though I thought it was a great movie as a kid, there are so many things I just didn’t absorb back then. It really has something for everybody and I just think that’s so cool. Things like the Chaos Theory…

S: Oh yeah, definitely. I’ve seen this movie a bunch of times, but there’s just something about seeing a movie on the big screen that makes you sit up and pay better attention than when it’s on G4 or whatever. It’s just different.

And you figure this out later, but the Chaos Theory with Ian Malcolm (Jeff Goldblum) is kind of setting up the second movie, so it’s very interesting to me. But this is a fantastic movie and it was amazing to see on the big screen.

A: Was there anything about seeing it now on the big screen that you actually hadn’t noticed before, for good or for bad?

A: Like was there anything that made you think, “That doesn’t work as well for me now.”

S: Oh well I had never noticed one of the biggest blunders ever at the T-Rex paddock. Where at the beginning of the movie when they get to the T-Rex paddock it’s ground-level, you’re ground-level with the paddock and when the goat gets brought up he’s eye-level with you, but when the T-Rex escapes later and pushed the car over there’s a massive cliff all of a sudden. And later when Sattler (Laura Dern) and the hunter…

S: Yeah, when they go and find the car, they get down there WAY easier and get back up extremely fast. And I had never really noticed that before. I’ve seen this movie plenty of times and I’ve never noticed that. But when it’s big and in your face, it’s a little harder to miss.

A: It’s one of the most famous inconsistencies in movie history. The T-Rex steps out of the paddock and then instantly the ground he was just on disappears into a cliff!

S: The only way I think they could’ve circumnavigated that inconsistency is to have said that they were at a different part of the paddock, but they don’t. They clearly show you that the goat was still there where they left it.

A: I want to say that Spielberg has addressed that whole thing by saying it happens because he needed it to happen to move the story along. (laughs)

S: So that wasn’t good, and it’s actually a little bit of a let-down, but you know what? The scary scenes, the jumpy scenes with the dinosaurs and that are all enhanced by the big screen and the 3D…

S: It was the good kind of 3D, the Avatar kind where things fall back and give it depth instead of jumping out at you, the same way that they redid Titanic. So scenes like when they’re up in the ceiling and the raptor is down below them? The 3D really gave things like that depth. I thought it was well done.

A: I actually had a little trouble with the 3D for this movie, and a lot of it had to do with when the dinosaurs in the shots were digital? The 3D made them look very digital; it became very apparent that they weren’t actually there. There was just a bit of fuzziness on the edges of the digital dinosaurs that made them look a little worse than they actual are.

Whereas when it was dinosaurs like the T-Rex or the kitchen scene with the raptors where they used animatronics, the 3D looks absolutely great. Because those “dinosaurs” were actually there the 3D gives them depth and makes it look amazing. So that kind of went back and forth on the dinosaurs to me.

But sometimes I also felt like the video quality got fuzzy at times, and I’m not sure if that’s on the 3D, but sometimes there were shots and camera movements where the 3D didn’t work too well, like when Grant climbs up the tree to get Tim.

S: It blurred things a little too much, I agree. And maybe that didn’t bother me so much because I went into it thinking, “Okay, this is an older movie, it’s not going to translate perfectly to 3D because it wasn’t filmed for it.” So sometimes you’re going to get issues with that and it didn’t bother me too much, because the scenes where it really counted it was awesome.

A: It really worked well sometimes.

S: It worked very well. And I could have left or taken the 3D, but scenes like the T-Rex chasing them or the velociraptors running around the visitor center? Those were pretty cool.

A: It was good at times, it was a little poor at times.

S: Should they have done a 3D conversion for the re-release? Maybe, maybe not. Maybe just re-releasing it on the big screen would’ve been enough, but obviously they could charge extra for the 3D and make more money, so I get it.

A: So then overall, thoughts on Jurassic Park 3D…..I’m very glad they did this re-release because I got a big kick out of seeing this on the big screen again. The T-Rex scene looks fantastic even after all these years, and it was fun to watch these characters again.

S: He’s Santa, ok? What I liked was that this gives a whole new generation an opportunity to appreciate these movies. In my mind these are classic Spielberg movies, they’re fun movies, and I hope they re-release The Lost World even though I doubt they will, but the Jurassic Park franchise is a fun franchise.

Really this will give kids the chance to understand more of the rides when they’re at Universal Studios…there’s a whole generation of kids who may have never seen this movie before! I know my younger sister hasn’t.

S: Which is just crazy to me.

A: So final thoughts?

S: If you’re a fan of these movies, you owe it to yourself to see this in theatres. If you want to take kids, you have to know your kids because there are some intense movies. But this is a great movie, it’s a fun movie.

A: The only thing I’m going to knock it down for is for the 3D that isn’t too great at times. It’s knocks what normally would be a five-star movie for me to a four-and-a-half star movie.

Photo Courtesy: filmobase.com
Posted by Two Tickets For... at 6:23 PM