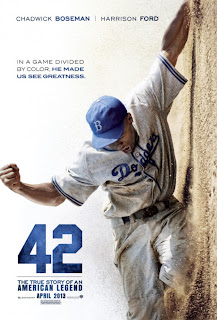 Synopsis: Based on the true story of Jackie Robinson (Boseman), the first African-American to play Major League Baseball, from the decision of Brooklyn Dodgers owner Branch Rickey (Ford) to make the controversial move, through Jackie's ascent through the minors and up to the conclusion of his rookie season in 1947.

Andrew: Hello readers! As you may or may not have known, Sarah and I were on vacation all of last week, as we went back to our home state of Michigan to visit our family and friends in our respective hometowns. So that’s why we were a little quiet last week on our site, but that doesn’t mean we weren’t watching movies!

Indeed, the Sunday before last we went to the local movie theatre in my hometown of Petoskey, Michigan to see the Jackie Robinson biopic 42 along with my mom and my uncle.

Starring Chadwick Boseman as Jackie Robinson; Harrison as Branch Rickey, the owner of the Brooklyn Dodgers who made the historic decision to sign an African-American baseball player to his team; and a whole host of other recognizable faces like Christopher Meloni (Law & Order: SVU) and Alan Tudyk (Dodgeball).

A: So obviously the set-up to this movie is that it’s based on the true story of Jackie Robinson being the first black man to play in Major League Baseball. This is one we definitely wanted to see. It’s a baseball movie, so that appealed to me, it’s a historical movie…why is it that you wanted to see it?


S: I wanted to see it because it looked good! I’m not a huge sports movie fan but when I saw the trailers I thought it might appeal to a larger audience than just sports fans. With names like Harrison Ford and Christopher Meloni you’ll get more people in the theatres than having a bunch of relative no-namers. It kind of reminded me of Remember the Titans in that way. It appeals to a large audience and gets people in to see it. So I really wanted to see this movie.

I didn’t know much about Jackie Robinson going in to it. I knew there was a day when every Major League Baseball player wore his number, but I didn’t quite get why when there were so many other fantastic black athletes out there in history that he was so iconic.

And I’m extremely glad we saw it. I loved this movie! I thought it was a little long but that didn’t deter from the movie itself. It was very interesting and it shows the harsh way that people were back in the day.

A: I think this movie was very well done. I think the casting choices were pretty inspired, it looks great – there is a lot of good cinematography choices they made; it’s a period piece set in the 1940’s and it just looks true to that time period.

But above all I think this is an interesting look at the state of racism and where African-Americans stood after coming home from World War II. I liked that the movie starts out by pointing out that black soldiers were a big part of the war effort and were almost on equal ground overseas, but then they came home and Jim Crow laws were still in effect. Black ballplayers still had to play in the Negro Leagues, and, you know, they just showed that people were accepting of whites and blacks mixing anywhere, let alone on the ball-field.

S: Well what I found interesting was that it was people all over the country! There was not a stadium that they went to where Robinson wasn’t booed when he came out on to the field. From Brooklyn, New York to rural Mississippi. And Philly! I was shocked because I didn’t know Philadelphia was such a hot-bed of racial tension.

S: So it just shows you how non-accepting people were back then. The Robinsons were coming from Pasadena, California which apparently was extremely different from cities east of the Mississippi. It’s interesting to see them adjust to Jackie’s place in history.

A: Agreed. Okay, so I think one thing most people who haven’t seen the movie yet might be wondering is how Harrison Ford does as Branch Rickey. It’s a bit of a different turn for him.

S: Yup, very different. I don’t know much about the actual Rickey, but there was a lot I liked about Ford’s performance.

A: Personally, of all the films we’ve seen so far this year, and there have been a fair amount, I think this is one of the best performances we’ve seen this year. He was equal parts over the top but equal parts understated. He had to convey a man that had this big burden on his shoulders because he was taking a huge and risky step, and he was going to get a lot of backlash. He also had to be in Jackie’s corner and face the criticism coming not only from outside his organization but from inside it as well.

The scene with Rickey and Jackie in the training room after Jackie was injured by an opposing player? When Jackie asks Rickey why he went through all of this and brought Jackie to the Dodgers?

S: That was a great scene!

A: I would not be surprised if Ford got any award love for this film, and that scene is one of the reasons why.

S: From what we’ve seen so far this year, I think he certainly fits into the category of being award-worthy.

A: This is his best role in a long time.

S: Oh yeah. We haven’t really seen him in anything where he’s acted like THIS in a long time.

A: Well the thing is that he’s not playing himself here.

S: And even Indiana Jones and the Kingdom of the Crystal Skull. It’s been a long time since he hasn’t played Harrison Ford, and I think he did a good job here. I really do.

A: You wanted to talk about the accents in the movie, specifically whether or not there were good Brooklyn accents. Now I’m not really sure what a true “Brooklyn” accent is, but remember that a lot of these characters are ballplayers not from New York…

S: Oh I know. But for the characters that did have a Brooklyn accent I just felt like they did it so that the audience would remember where the movie was located. But I tink the one that bothered me the most was the one that T.R. Knight uses…

A: The guy from Grey’s Anatomy?

A: I can’t remember his name (Editor’s note: Knight’s character is named Harold Parrot) but he essentially played one of Branch Rickey’s assistants.

S: Anyways, his accent really bothered me. I want to move on though, so what did you think of the actor who played Jackie, Chadwick Boseman?

A: Again, this story takes place a long time ago so it’s not like I’ve really seen newsreels of the real Jackie Robinson, I’ve only seen photos of him, but from those there were many, many times where I felt like Boseman looked so much like the real Jackie Robinson. In the face, it was very obvious like he could play – or at least act like he could play baseball, there is a difference – but they casted him very well.

He was able to play the understated rage and anger I’m sure Jackie Robinson felt at times, boiling underneath. So I thought he did a great job. He has an infectious smile, he was funny…

S: The thing I loved about Boseman is that he’s an unknown. He’s an unknown actor with this large role of playing a historically important sports figure, which is pretty neat. A lot of the teammates were played by relatively smaller actors, too. The coaches and some of the secondary characters…but Robinson was the main character and they cast an unknown actor in the role and that was so cool because it strips away everything Hollywood about him, and that made it so genuine.

We weren’t looking at the screen and thinking, “Oh that’s so-and-so playing Jackie Robinson!” We were looking at him and just thinking, “It’s Jackie Robinson.” We didn’t know what his name was. And I thought he did a fantastic job. I don’t think he’ll get award love because he might be too much of an unknown…

A: But this was a good star-making turn for him. Or it will at least help jump-start his film career.

Going off of that, I want to say that I felt a lot of the baseball action was very well done. There are a lot of baseball movies, and some do a better job than the others in creating a realistic baseball feel for the game-play, but I loved the re-creation of all the old baseball stadiums…

S: Oh yeah, those were cool.

A: I know a lot of the stadiums were done with CGI…

A: You honestly can’t tell that it’s CGI. It looks like they built all these stadiums, or at least used old ones as settings.

The uniforms look great, the fields, the pitching motions with these old pitchers – like the wind-ups they used to do? And then I thought they did an awesome thing with some camera angles, like the where it looks like Jackie slides into a base and goes right over the camera…you actually asked me how they did that…

S: Yeah, there’s one particular shot where they used that and it’s actually kind of obvious how they did it, but it looks so good. It’s a great shot.

A: And then a number of times they use a camera angle from the home plate umpire’s perspective, behind Jackie when he’s batting, which was great because it gave you a great example of what it would’ve looked like with these pitches flying in at him. They also use it when he gets a hit sometimes and it’s just a cool angle because you really see how the ball flies of the bat. I loved it.

I thought they did the baseball action in this movie very, very well.

S: I agree with you. It didn’t feel staged like a lot of sports movies can feel. This felt like I was watching actual games.

So it’s just an interesting and really cool  biopic on a completely different era; something different from your normal civil-rights movie, and how it didn’t just effect the day-to-day lives but things like sports and how much it effected them.

I really liked this movie and I feel like we should own it someday. It’ll fit really well into our collection.

A: I agree! So final thoughts?

S: I would compare this movie a lot to Remember the Titans, just that good feeling sports movie that deals with a historical racial topic. I would only really knock it down because it started to drag a bit at the end and felt a little anti-climactic.

A: Yeah, I give this one a lot of high marks particularly for the strong lead performances by Boseman and Ford, but because of the great historical content and because of the supporting performances, particularly Tudyk as the incredibly racist manager of the Philadelphia Phillies, and Meloni's funny turn as Brooklyn Dodgers manager Lou Derocher (who actually didn't manage the team that season because he was suspended by the league's commissioner).

So this is one people should definitely see in theatres?

S: Absolutely. If not in theatres then definitely rent it when it comes out!

FINAL VERDICT: One we’ll add to our collection someday!

Photo Courtesy: Ain't It Cool News
Posted by Two Tickets For... at 7:51 PM