Gru & Crew Are Back With a Perfectly Enjoyable Follow-Up!: Our Review of "Despicable Me 2" (2013) 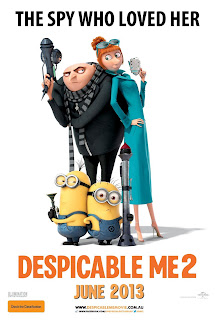 Synopsis: Famed supervillain Gru (Carell) has retired from villainy to focus on being a good father to his daughters - Margo, Edith and Agnes - as well as starting his own jam and preserves company. But when the Anti-Villain League comes asking for his assistance to find and stop a new supervillain, Gru must team up with an agent named Lucy (Wiig) to stop a villain named El Macho (Bratt) who was long-thought to be dead.

Andrew: Hello dear readers! Our sincerest apologies for our absence on the blog lately, we’ve been pretty busy the last week or so with me traveling back to Michigan last weekend for a wedding and then hosting Sarah’s younger sister all week out here for an East Coast visit. Haven’t had a whole lot of down time when you combine those things with work, but things have slowed down juuuuust enough that we can finally post reviews we’ve been meaning to get to!

Steve Carell returns as Gru the supervillain-turned-adoptive father to his three daughters Margo, Edith and Agnes.

Sarah: This time around instead of being a bad guy he’s recruited by the Anti-Villain League to help them bring down a new super-villain they can’t quite seem to catch. We were really excited to see this one because we absolutely love the first one, and this one didn’t disappoint! What are your thoughts on Despicable Me 2?


A: I had a ton of fun with it. I will say, I’m not quite sure that it’s up to the level of Despicable Me…

A: But I still enjoyed it for a lot of the same reasons I enjoyed the first one, namely the characters, the voice-actors’ performances, physical humor…

S: Plus the situational humor…

A: Yes, and of course, the Minions. So a lot of things…if you liked the first one, you’ll like this one. I just don’t think the plot was as good as the original.

S: The story was definitely lacking here, but I mean, at the same time it’s a kid’s movie so they had to keep it pretty simple. It definitely lose some of its newness, it’s originality, but you get that when it comes to sequels. So that definitely plays a part here.

It’s great that they brought back almost all of the same voice actors as the first one, I think that’s very crucial when it comes to an animated movie, at least from an adult point of view. From a kid’s perspective it might not be that important, but for adults…there are other animated movies that sometimes don’t do as well because they don’t bring back all their voice actors.

So I think that’s important.

A: I think you’re on to something, because much like Monsters University bringing back Billy Crystal and John Goodman, I absolutely don’t think they could have made this film without Steve Carell returning as Gru. I think to a lesser extent they needed all the girls’ voice actors to come back, especially Miranda Cosgrove as Margo…I mean, you could have used different actors for Edith and Agnes, but there’s just something…

S: There’s something about Agnes’ voice that’s perfectly cute, and Cosgrove is able to give Margo a realistic feeling teenager aspect.

A: Yes, they were just perfect for their roles. I will admit, for the longest time I could not peg whether or not it was Russell Brand doing Dr. Nefario again, because in the first few scenes he’s in his voice sounded different to me somehow, like it was lower or gruffer…

S: I wish you had asked me if he had returned, because I knew for a fact that he had.

A: Well, towards the end it becomes a little more apparent that it is Brand’s voice, so…yeah. I liked that they brought Kristin Wiig back, albeit in a different role than the first film.

S: And it was in a role that was way more like how Kristin Wiig usually is. Like, you could tell it was her this time, whereas in the first one she definitely changed her voice and sounded more Southern. This time, playing Lucy, it was more in line with characters she usually plays, which was kind of fun!

A: I felt like Lucy was an extension of Kristin Wiig. They gave her a similar hair color to Wiig’s real hair, her mannerisms…stuff that really fit was Wiig does so well. So I thought that was a successful addition to the movie. And of course Lucy is a bit of a romantic character for Gru, so that was something I was interested to see – now that Gru’s a dad, what’s the next step? And I think they fit that natural progression.

S: It’s really cute! I thought Benjamin Bratt as Eduardo, a.k.a. El Macho, I thought he was very funny. Again, a little bit of a stretch, he’s not as strong of a villain as Vector was in the first one…

A: But I liked that they kept it a mystery as to who the real villain in the film in for a while. Like, for the longest time Gru thinks it’s this Eduardo guy, then it’s possibly this other character, but when it finally comes around to show that Eduardo is the bad guy, I thought he was fine. I actually liked Eduardo more when you couldn’t tell if he was really the bad guy or not.

S: Well and he’s more of a comedic character than anything. Both sides of his character are funny, his backstory is humorous, and I like that this villain kind of deals with Gru now being a father and having to worry about things like boys, because Eduardo’s son takes a liking to Margo. I think that that humanizes it and was equally funny and cute.

A: Here’s a talking point about El Macho: we mentioned that it’s Benjamin Bratt voicing the character, but here’s the thing: originally…Al Pacino was supposed to be the voice of El Macho!

A: Yeah! Pacino recorded his lines and everything, if I’m not mistaken, and then I think he left because of creative differences. So he dropped out and they had to replace him, so they replaced him with Benjamin Bratt.

So here’s the thing: as I was watching the movie I kept thinking to myself, “How would this character have sounded if it were still Pacino?”

S: How would this character have sounded with a New York accent? (laughs)

A: Well I assume it would’ve been Pacino doing a Mexican accent. It’s not like he hasn’t played Hispanic characters before.

S: Yeah, I don’t know how I would have liked that. Possibly not at all. I think Bratt takes himself a little less seriously than Pacino would have. No, I liked the addition of Bratt to this series. Very interesting, though, to learn that it was supposed to be Pacino. I can’t imagine what that would’ve been like. I’m glad it turned out like it did.

I did miss Jason Segel, Will Arnett and Julie Andrews in this one, though. But the Minions were fabulous again, they really kind of take on a life of their own here.

A: Actually, one of my complaints about this movie is that I feel like they focused on the Minions a little too much this time.

A: It’s obvious why they did it, because they were the real breakout star of the first film, it’s what the kids really connected with and they’re catering to the kids here, but from an adult aspect? Don’t get me wrong, I did laugh at them a lot, but there were times where I felt like it was a little too much. So I’ll be curious about how I react to the upcoming spin-off called Minions, starring Sandra Bullock and Jon Hamm.

So it’s a small complaint. I actually really liked when the Minions got turned into the purple, monstrous versions. I liked that they were tweaking out and how they talked.

S: They were hilarious!

A: Yeah, so the Minions were funny, per usual.

S: Overall, as an animated movie, it’s a great summer film to take the whole family to see. It’s great that there have been two really fun animated movies this summer that have come out around the same time, that there are options for parents to take kids to, it’s not just another mindless action flick, you know?

Like most sequels it has its weaknesses, especially losing some of its freshness, but that’s to be expected I think when it comes to most sequels.

A: I do want to say real quick before we wrap this up that I liked that they brought back Pharell Williams to do the music…

A: Kept with the tone of the first one and worked well here. We saw this one in 3D and it looked great

A: And of course, animated movies like this look a lot better in 3D than live-action films do, but I would actually suggest checking this one out in 3D if you can, especially for the kids because during the closing credits they let some Minions roam free and a lot of what they do is geared towards the 3D.

FINAL VERDICT: A great way to kill a summer afternoon with the kids!

Photo Courtesy: twinnieworld.blogspot.com
Posted by Two Tickets For... at 6:41 PM