Emmerich's Latest Is Disastrous, And Not In His Normal Way: Our Review of "White House Down" (2013) 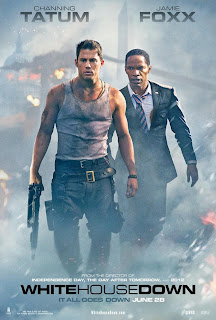 Rating: PG-13 for prolonged sequences of action and violence including intense gunfire and explosions, some language and a brief sexual image

Synopsis: Capitol Policeman John Cale has just been denied his dream job with the Secret Service of protecting President James Sawyer. Not wanting to let down his little girl with the news, he takes her on a tour of the White House, when the complex is overtaken by a heavily armed paramilitary group. Now, with the nation's government falling into chaos and time running out, it's up to Cale to save the president, his daughter, and the country. (Courtesy of Columbia Pictures)

Andrew:  Hello readers! Last Friday Sarah and I hit the local multiplex to catch one of last weekend’s new releases – the action flick White House Down, directed by Roland Emmerich, director of such classic doomsday movies as Independence Day, The Day After Tomorrow and 2012.

A: This is true. In the three movies I mentioned just now he has managed to destroy the White House in different ways. And now his new film is pretty much centered on doing that exact thing.

White House Down stars Channing Tatum as John Cale, a prospective Secret Service agent, and Jamie Foxx as the President James Sawyer. In supporting roles we have Sad Turtle Face…

A: Richard Jenkins as the Speaker of the House, and Joey King as John’s daughter, Emily, who has been coming on strong as of late with roles like a young Talia al Ghul in The Dark Knight Rises, the China Doll girl in Oz the Great and Powerful and she’s in the upcoming horror film The Conjuring.

S: So a lot of recognizable faces in this film, a lot of stars.

A: Correct. But the real talking point about White House Down is that this is the second film this year that has been about America and, specifically, the White House being attacked. The first one was Olympus Has Fallen which we very much enjoyed (and you can read our review of right HERE)…

A: Well the way you just described these movies, now that we’ve seen them, I think it’s safe to say the realities about which film deserved which description was the opposite of what we were expecting.

A: I mean, I didn’t go into this thinking it would be great. I went in expecting it to be fun. And knowing Emmerich’s films, like Independence Day is cheesy fun…

A: It’s great! That’s cheesy but fun. Godzilla is cheesy, but not so fun. But then The Day After Tomorrow and 2012, while not great films, are still fun to watch…

A: Lots of action, lots of CGI spectacle…so going into this, we kind of knew his history. And you had the cheesiness, and you had the CGI, but…

S: It was groan inducing.

S: His older films are cheesy, but what made the cheesiness okay in, say, 2012, is that it was coming from John Cusack’s mouth. And you expect him to kind of be cheesy. I expect him to revel in not having great dialogue. But I expect Jamie Foxx and even now Channing Tatum to bring the heat, make it awesome, and push past the cheesiness. And they just couldn’t.

A: And not just them! There’s a legitimately good cast here with Maggie Gyllnhaal, Richard Jenkins, James Woods…

S: Not one of them was able to really give the dialogue the heft it needed, except maybe Jenkins at times.

A: Here’s the thing to me though: I thought Channing Tatum did about as well as he could have to try and shoulder the load here and rise above the material he was given. Jamie Foxx…a little less so…

S: Yeah…not very believable at all.

A: I liked the scenes where he was acting presidential, but here’s the thing: they tried too hard to make this like a Die Hard film, where you have your everyman who gets caught in an absurd situation, he’s in over his head, he’s the only one who can save everybody…it’s exactly like Olympus Has Fallen except here, I think the biggest mistake the movie made was making the film PG-13, whereas Olympus Has Fallen was a hard R, and embraced the R – it had bloody violence, it had language, it just embraced it’s rating and the topic of the movie at hand.

Here, they were obviously going for a PG-13 movie so that more people could come see it, and it lessens some of the impact of what was going on. Then you had groan inducing one-liners, all the bad guys were kind of one-note…the whole reason they had for doing what they were doing was cliché and done better before in films like The Rock…and honestly I thought the villains in Olympus Has Fallen had a better motive.

S: Well, also, the bad guys in Olympus Has Fallen were more believable to me. Here the bad guys were a rag tag team of white supremacists, former Special Ops soldiers turned mercenaries and war torn veterans…it just didn’t make sense to me. There’s not much reason these guys should have been brought together to make a team. And I understand they were all brought together by one man, but this one guy didn’t lend himself to be that imposing.

A: This movie was just…it was groan-inducing, it was cheesy, the action wasn’t great, the way the action scenes were shot was choppy…especially the hand-to-hand fight scenes like the one between Tatum and Jason Clarke’s mercenary character, which should have been an awesome fight scene and instead it was just kind of meh. So it just wasn’t fun for us.

S: Here’s the thing: it had all been done before…

S: Yes. And it’s been done in the last four months! That’s kind of what I’m having a hard time understanding, is how Hollywood allowed the same movie to come out twice in the same year under two different names. I know they’re different movies from two different studios, I get that, but nowhere along the way did anyone say “These are the exact same movies, maybe we should try something different?”

A: I just think the premise and the tone of this kind of movie, where you’re attacking the White House, you’re attacking it specifically with these motives…it would have just been better if it had been shot to be R-rated and they had taken it more seriously. Instead they played it for laughs a lot of the time, there were a lot of very familiar Emmerich tropes and side characters that make funny quips – like the White House tour guide! What the hell?

S: There was literally one particular one-liner that caused me to slap my forehead.

S: In the stereotypical kind of “Ugh,” mannerism, because it was so, so bad. I couldn’t help myself. It was all I could do not to get up and walk out of this movie just from a script standpoint.

S: And with these actors delivering the lines…

A: I actually liked these actors for these roles. I liked Gyllenhaal, Jenkins and Woods in their primary roles…

S: Right, it was more of the secondary characters that I had problems with. Like the tour guide, or Rachel Lefevre, who plays Emily’s mom.

A: Exactly. My other big problem was…and again, for a while it kind of seems like we’re trying to figure what the villains’ end-game was, towards the end it became incredibly obvious to me what was really going on. And from that point on…and it happened with about a third of the movie left to go, I knew exactly where it was going and it did a poor job of getting there. It was mailed in, almost.

Or if you’re familiar with these kinds of movies, if you’ve seen your Die Hard’s and you’re familiar with Speed and The Rock and all that, you saw it coming a mile away. I just wasn’t handled well. I wish I had been watching Die Hard or The Rock instead. That’s all I kept thinking as we watched White House Down.

S: I didn’t take itself seriously enough, you’re right. Because all those other movies you just mentioned, while they don’t take themselves too seriously, they still take the actual motivation behind what’s going on and the action that’s going down relatively straight-faced.

A: They take themselves pretty seriously, compared to this at least. They’re R because of language, because of violence, because they go for it. Yes there are one-liners and wisecracks, but they’re done so well, or they’ve just been done before…

Die Hard set the tone all these other movies have been trying to copy for years to come, but if you’re going to try to do that you have to make it R! And that’s what Olympus Has Fallen did! It embraced it, and made Gerard Butler more of your John McClane/Bruce Willis-type guy. I mean, look what they did with Live Free or Die Hard, they made a PG-13 Die Hard movie and people balked at it. It just wasn’t the same.

S: I will give White House Down this: Emmerich does a great job, once again, of destroying D.C. It was beautifully rendered and done in computer generation. It was impactful…but it’s been done in every other movie he’s done. But it was kind of neat to see how he was going to do it this time.

A: It was almost overkill to me, though. The chase sequence on the front lawn of the White House…

S: Oh for sure, but I meant more like the destruction of the Capitol Building, stuff like that.

A: Gotchya. And I don’t know, I might have to disagree with you on the CGI. It wasn’t great in a lot of spots. Especially when there were helicopters in shots…

A: There were so many times it was painfully obvious that those choppers were not there.

S: Well it was very obvious where they spent their money on CGI. Very obvious.

Going back to the acting real quick, I’d say Joey King doesn’t even do very well in this movie.

A: Well again, she’s not given a whole lot of good to work with. What her character does at the end of the movie?

S: Oh God, that was terrible.

A: We can’t blame her for that stuff. I lay the blame for that solely at the feet of the screenwriters and Emmerich.

S: Yeah, I think our main point with White House Down is that it’s been done before, and it’s been done better. This one completely missed the mark. Do not waste your time seeing this in theatres. Rent Olympus Has Fallen, it’s so much better.

But I think the worst decision in this movie was having James Woods as the bad guy.

S: James Woods is a joke. Be honest.

A: He’s a respected actor!

A: So is Channing Tatum!

A: Like I said earlier, I liked Channing Tatum, I didn’t mind Jamie Foxx, I liked their chemistry…I thought the best parts of the movie were when it was quieter and it was just the two of them talking to each other about being fathers, or being family men. I liked that stuff. Then when stuff started getting blown up, I got bored. I liked it better when they got down to be human.

S: When they talked about being heroes and making a difference.

A: Exactly, so I liked that stuff just fine. Everything else? I didn’t like. We said it before, rent Olympus Has Fallen, or better yet, just watch Die Hard again.

S: Yeah, don’t waste your time or money on this one. Oh! With the holiday upon us, go watch Independence Day!

A: Perfect suggestion, my dear.