Like a Bad Museum, Clooney's Latest Film is a Bit of a Bore: Our Review of "The Monuments Men" (2014) 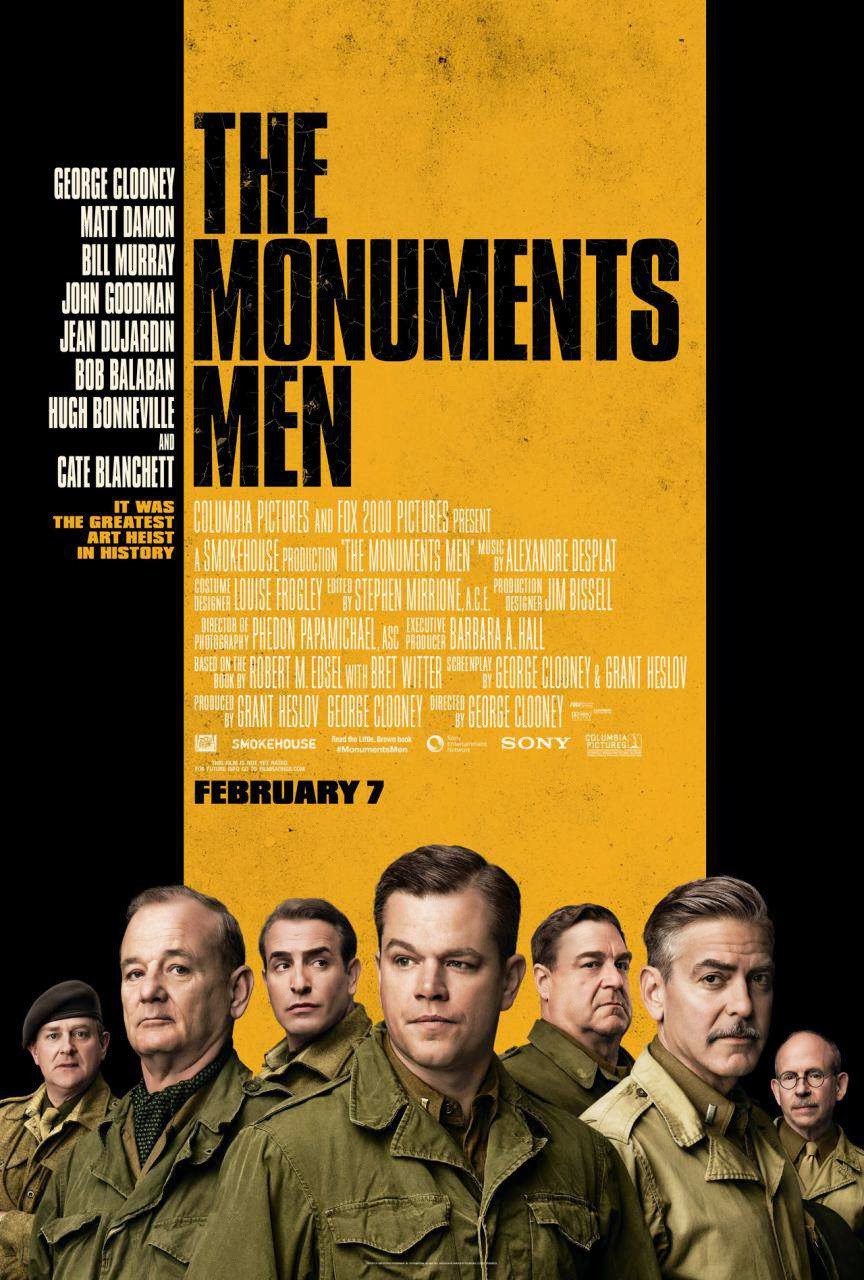 Rating: PG-13 for some images of war violence and historical smoking

Synopsis: Towards the end of WWII, a select unit of art experts is sent into Europe to find, protect and return famous and not-so-famous works of art from the Nazis.

Andrew: Hello, dear readers! As you may know we’ve been on a bit of a break because of our recent move from New England to Georgia, but we recently were able to see a couple of films this past weekend and we’re getting back into the movie reviewing game!

The first film we saw this weekend was The Monuments Men, a recently released film directed, written and produced by George Clooney and starring George Clooney plus a host of other big names: Bill Murray, John Goodman, Matt Damon among others.

The film is based on the true story of a squadron of art historians and experts that went overseas during World War II on a mission to save famous art and artifacts from Hitler’s rule.

So, this is one that we have been looking forward to for a while, especially since it got pushed back from it’s original release date in December to February...

Sarah: Which means that it wasn’t able to be a contender for this year’s Oscars.

A: Correct. So, now that we’ve seen it, what did you think of The Monuments Men?

S: I think you’re going to be a little bit surprised but I found the movie…wanting. It was a very interesting story, extremely interesting as far as what these men had to go through to get all of this art back. I hadn’t realized how much art was actually in Hitler’s possession, which makes me have a better appreciation for the pieces that I’ve seen in my travels. That stuff was all was very cool!

I found it to be a little dull though! The acting was fine, but that’s basically all it was. Fine. I don’t know! I don’t know if it was the story, but…what did you think?

A: I am actually going to agree with you. I think the story is interesting. It’s a very neat story and it did make me appreciate what happened during the war in regards to art and history of a number of historical figures and cultures. The Jewish culture obviously had a ton of culture destroyed and stolen, which was interesting.

But yeah…overall it was a bit dull. I put a lot of blame for that on George Clooney, what with his gigantic role in writing, producing, directing, and starring. It was just kinda…

S: It was a little history lesson-y. Kind of just not…very entertaining.

A: It was sort of “by-the-numbers,” just hitting its beats.

S: Yes! That’s what it was. It was trying to hit certain criteria. I didn’t feel a lot of passion in this movie.

A: Me either. The topic the movie covered was interesting but the execution of the film...it felt very mechanical to me.

S: That’s what it was; this should have been a very passionate movie about the sheer importance of the art and culture that they were trying to save. The only person I can credit as far as giving a passionate performance was Cate Blanchett. But she was really the only character who I believed to be passionate about this story and project. And that was a little disappointing and I was a little bummed about that.

A: Yeah, I think another thing was just… it had a great cast but similarly to what you said, no one except Blanchett seemed to have much of a sense of urgency. And this movie, in it’s entirety, didn’t seem to have a sense of urgency considering it’s a World War II movie and some members of the characters did perish. Even then it was just…

S: Like, “Eh, well I wasn’t much invested in that character anyway.”

A: Exactly. Not only was there no investment but there wasn’t a whole lot of tension, either. Even in the end when’s it’s a race against the clock to save the art from being destroyed…

S: And to save it from the Russians…

It was a little long. There where times when there were extremely long shots that felt unnecessary, especially one where they linger on the model of Hitler’s planned Fuhrer Museum. It was just too long.

S: And it wasn’t super-impactful which is supposed to be the point of those types of shots.

A: So overall I found The Monuments Men ok…

S: But a little disappointing.

S: He was just there for - as he said even at one point in the movie - “just as a pretty face.” It was disappointing over all. I don’t think it will be an Oscar contender at all next year. Not even close with the amount of talent movies that are coming out this year.

A:  Honestly I see why they pushed it back.