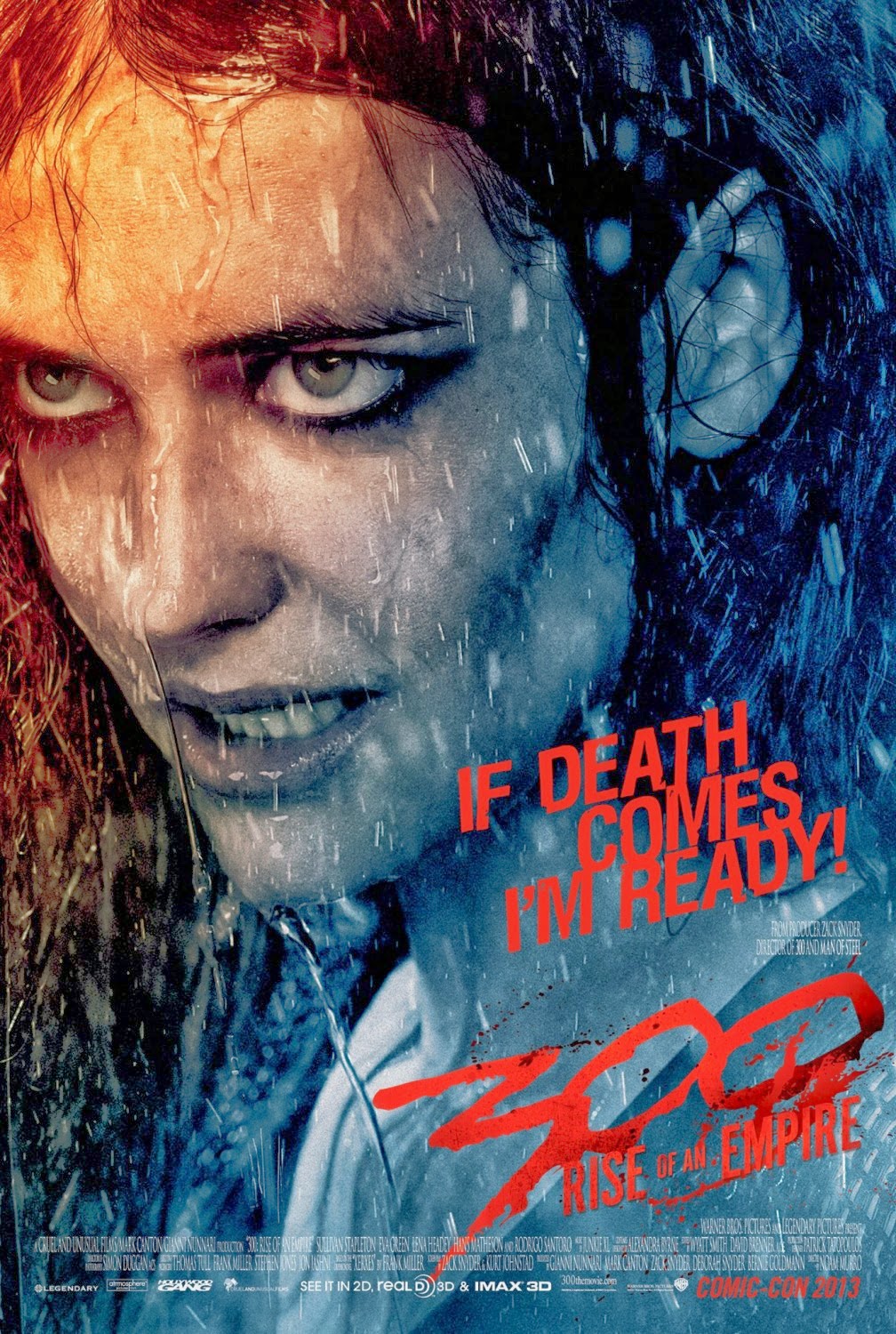 Rating: R for strong sustained sequences of stylized bloody violence throughout, a sex scene, nudity and some language

(Editor's note: We originally saw this film the weekend of its release. Our apologies for the delay!)

Andrew: Hello dear readers! We just got out of seeing the LONG awaited sequel to Zack Snyder's hit 2006 film 300, this one aptly named 300: Rise of an Empire.

Sarah: Wow, it's been 8 years since the first one came out?

A: It’s been that long, yes. And this one was actually more of a side-quel to Snyder’s 300 as opposed to a direct sequel.  It takes place before, during and after the events with Leonidas and his 300 Spartans.

300: Rise of an Empire stars Sullivan Stapleton (Cinemax's Strike Back) as Themistocles, the general of the Athenian navy; Eva Green (Casino Royale) as Artemisia, the commander of the Persian navy; as well as Lena Headey and Rodrigo Santoro reprising their roles as Queen Gorgo and Xerxes, respectively.


As we sort of just mentioned, this one is more naval-based and most of the battles take place on the high seas. So a bit different from the first one in that regard. Sarah, what was your take on this film, especially since it has been such a long time since the first one?

S: Let me start out by saying that I have been really excited for this one as I loved the first one. And I have to say, I was a little disappointed, and I think I know why.

S: I think it’s because it’s not new anymore, which I think is fair. The first one...it spawned this movement of period piece films are stylized very much the same way that Snyder styled 300. Knockoffs really. So I think because it’s not new anymore, doesn’t have that new pizzazz and it just fell a little short for me. It follows a very similar formula to the first one, when I was hoping for something a little newer…

A: A little fresher?

S: Right, it doesn't have the freshness. And I didn’t realize it was a side-quel going into it so that kind of threw me. I thought it was going to be a pure revenge movie and it wasn’t.

I mean, I loved that Lena Headey was back reprising her role as Queen Gorgo, she’s definitely a fun actress to watch on screen and since she’s everyone’s favorite villain to hate on Game of Thrones, it’s kind of nice to see her as a hero in this.

A: I can understand not enjoying it because of the fact that it’s not new. It’s not necessarily stale, but it’s not anything new. The whole ramping up the action then slowing it down, the stylized blood and violence has been over done…

S: Thanks to the first one! And that’s what we have to remember: it’s because of 300 that these other movies even exist.

A: So 300: Rise of and Empire should have come out a long time ago, but I still enjoyed it. Like you, I was looking forward to it. I knew that it was a side-quel but I wasn’t as familiar with the story of Themistocles as I was with Leonidas before the original came out. I wasn’t bothered by the fact that it was almost a retread and really a remake in the fact that it had a lot of the same beats as the first one. It even crossed paths with the first one in some spots, like when Queen Gorgo comes into the picture.

S: I actually liked that part! I think something that I wasn’t a huge fan of was the whole sea aspect of it. And that’s something people are definitely going to love, but I think I like the idea of a land battle more than a sea battle.

A: Yeah, I think I’m going to disagree with you on that. I actually enjoyed the naval scenes. I felt like each battle got bigger and crazier really, but pulled off in a really good way. Each one escalated in a fashion that…

S: Very similar to the first one…

A: Yeah, but because they’re on water there were so many different tactics that could be pulled off. In the first one it was just wave after wave of assassins, then the giants, etc. This one was different tactics by the same navy trying to break the Athenians. And it all looked so great! I especially liked the second and third fights. The second one where they’re jumping from ship to ship and the third one with all the fire? I just thought they were really well shot and created from a technical standpoint.

But I think to me the biggest weaknesses were A.) the story (it’s not as good a story as the original) and B.) the lead character of Themistocles. And I think that's on the actor, on Sullivan Stapleton. He’s just not as outgoing as Gerard Butler was.

S: Well he didn’t have the gravitas that Butler had, definitely. Stapleton wasn’t someone that you could look at on screen and be like, “Oh yes, he’s definitely the leader of an army.” I think that was the main thing for me - that he wasn’t as strong, wasn’t as commanding on screen. But that could have been the characters, too. If you noticed, the Athenians aren’t as fierce as the Spartans, so there is that too. As soon as the Spartans come on screen, that’s when a bit of excitement ramps up.

A: There is a big difference between the Athenians, which the nail home a couple of times as they’re “Nothing but farm hands and poets and politicians.” They’re not warriors like the Spartans.

S: So that’s was interesting to me. Okay, on to the big thing about this movie. I thought Eva Green was an excellent addition to the cast.

A: She’s the best part of the whole movie!

S: Yeah she’s crazy good, as well as just plain crazy in this!

A: And I have been hearing this from a number of writers that I follow on Twitter, that Eva Green was by far the best part of the whole movie because she just got into it! Chewed into that scenery and overacting and the crazy eyes and everything! Her sex scene with Stapleton was over the top ridiculous. Every time she was on screen it was more interesting than when Themistocles was on...except for the sex scene when they were on together, obviously.

S: Oh, a hundred percent! Why couldn’t the whole thing be from her point of view?!

A: It almost sorta was, the film was kind of 50/50. She was definitely a co-lead with Stapleton.

S: She had that commanding presence when she was on screen. It was like, “Yeah I can  get behind her.”

A: She was pretty electric. And I want to say when this movie was in pre-production that there were rumors that it was going to be more about her and the title was going to have her name in it, like Battle of Artemesia. But they obviously changed it to Rise of and Empire.

Overall, I enjoyed the film, it was good popcorn/action movie. The crowd that we saw it with LOVED it! There were a number of times when they were clapping and cheering.

S: They really loved it.

A: So that was kind of funny to me. I actually really enjoyed the music in this one. It really added to the suspense.

S: There was also more levity in this one than there was in 300, which was nice. You didn’t come out of the movie with that tense feeling. There were definitely some scenes that made you laugh. Yeah, it wasn't great but it was entertaining, definitely.

A: Before we finish, another thing I wanted to touch on is that we saw this one in 3D. We didn’t want to but it just happened to fit into our schedule better. I actually thought the 3D was pretty good and I’ll be curious to look-up and see if it was shot in 3D or not. But…I did NOT like how the stylized blood looked.

S: Oh it did not look as good this time. It was globby.

A: It was globby and during the first battle all I kept thinking, “It looks like BBQ sauce.”

S: Oh yes! It was too thick! It was so weird! I don’t know what that was. Was it a difference in production design?

A: Well, yeah the first one wasn’t in 3D so they didn’t make it look like that.

S: No...it didn’t have to have the hang time as long as in this new one.

A: The blood in the first one looks like it does in the graphic novel that Frank Miller wrote.

A: Exactly. This new one looks very CGI and rounded. Yeah, it looked like BBQ sauce. I couldn’t get that thought out of my head and it hindered the action scenes for me just a bit.

S: And made you a little hungry apparently, too. (laughs) So what would you give this one then?

A: Well first of all I would like to say that it’s one worth seeing on the big screen, but maybe just catch a matinee of it.


Photo courtesy:impawards.com
Posted by Two Tickets For... at 6:39 PM