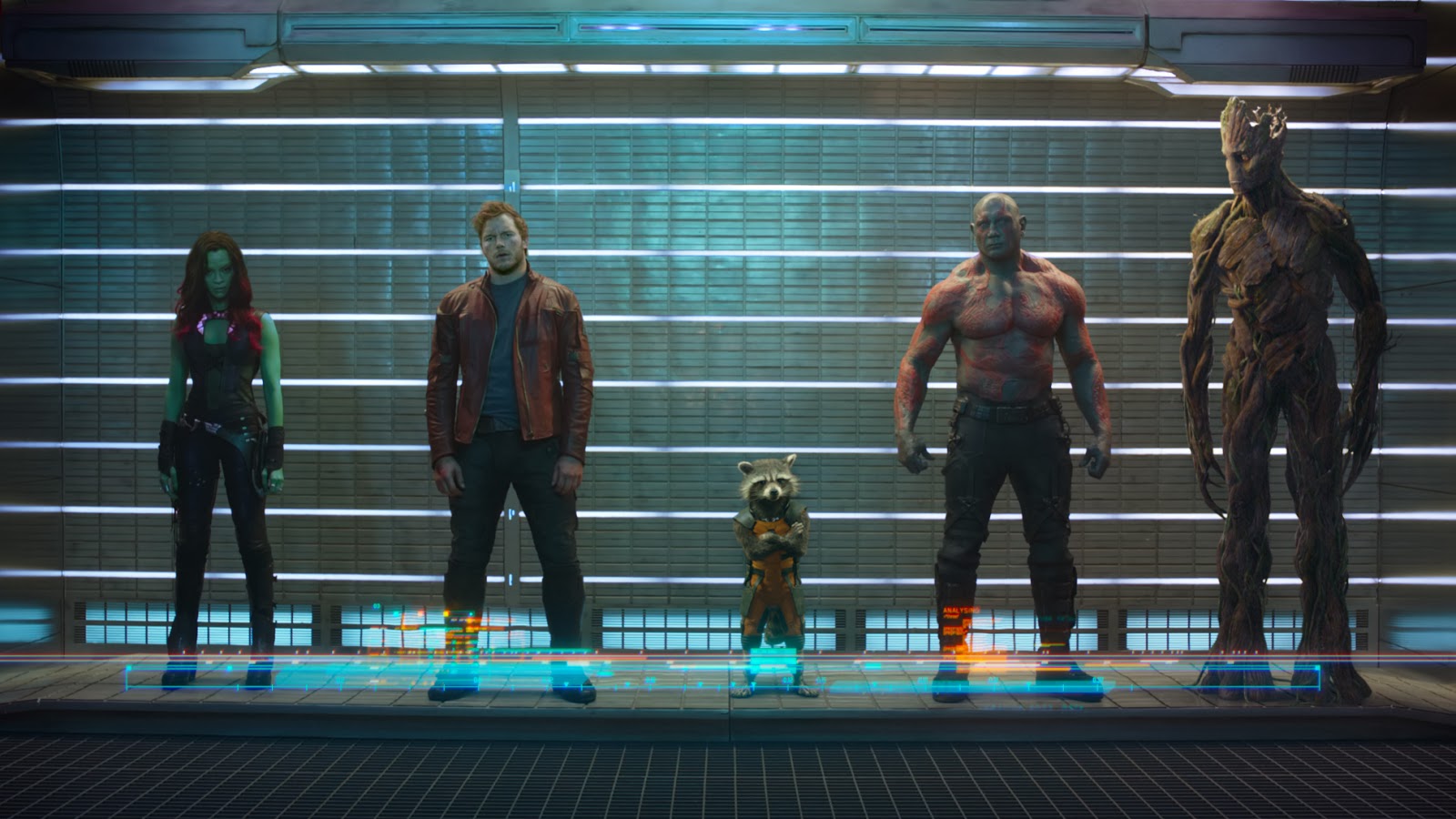 15.) A Million Ways to Die in the West (May 30th)
S: Seth's next feature film? More Family Guy jokes and tons of A-list cameos? In. Totally in.
A: This one barely missed out on my Top 15, but I do love me some Seth McFarlane. Count me in, too.

14.) Sin City: A Dame to Kill For (August 22nd)
A: Full disclosure: this post was going to only rank 15 films but then I remembered this sequel to Sin City was coming out this year and I needed to expand it to 16 so Horrible Bosses 2, which made both of our lists, didn't get knocked down to an honorable mention. I've been waiting years for this film and this teaser trailer made me jump for joy.


13.) Exodus
S: While this isn't the only Bible-themed movie coming out this year, it definitely looks the best. It's a great story and with Christian Bale leading the way, I have very high hopes.
A: This film had me at Ridley Scott. I'm not usually one for Bible films, but a Ridley Scott/Christian Bale pairing is just loaded with promise.

12.) Transcendence (April 18th)
S: Johnny Depp is a main man in this household. This is not news. So the idea of his character's consciousness getting uploaded to the cloud? This just kinda seems to make sense.
A: First off, it's Johnny Depp. This won't be his first mention on this list. Secondly, it costars Paul Bettany, Rebecca Hall, Cillian Murphy and the always awesome Morgan Freeman. Thirdly, it's the directorial debut of Christopher Nolan's go-to cinematographer Wally Pfister. Kinda excited to see how it turns out.

A: Amazingly (to me at least) Sarah did NOT have this film on her list. Hence it's low showing. But I'm very excited to see the next chapter in what's turning into one of the best sci-fi film series in recent memory. This was my favorite book of the trilogy, I'm curious to see how they translate it to screen.

10.) X-Men: Days of Future Past (May 23rd)
S: I've waited long enough. It's time for a full circle to take place with these movies. Old meets new in what promises to be a glorious thing.
A: We both loved X-Men: First Class so we're both very excited for this sequel. But I had it lower on my list so it's ranking got hurt a bit. I'm a little hesitant because Michael Vaughn didn't return to direct, but I still expect it to be pretty good. (Plus it has Peter Dinklage!)


9.) Gone Girl (October 3rd)
S: I don't know a ton about this one, but have heard a ton great things about the story so I'm excited about it.
A: Honestly I don't know much about it either. But what I do know is that it's David Fincher's new movie and that's really all I need. He's one of the best working directors in Hollywood right now. And honestly, I think it's better to go into this film not knowing a lot. (Also doesn't hurt that Trent Reznor and Atticus Ross are doing the score.)

8.) Dumb & Dumber To (November 14th)
S: While I wasn't a huge fan of the first one, I am fully aware of how classic a film it is. And I definitely have a better appreciation for the actors.
A: The original is my favorite comedy of all-time. No ifs, ands, or buts about it. Am I hesitant because it's been 2 decades since the original? Of course. But Jim Carrey, Jeff Daniels AND the Farrelly Brothers all returned for it. I have high hopes.

7.) Dawn of the Planet of the Apes (July 11th)
S: I loved the first one. It was a really cool movie and the motion capture that they were able to accomplish was ingenious! Now that the monkeys have fully taken over, I think it will be even more intense.
A: Rise of the Planet of the Apes was a pleasant surprise in how good it was. Plus we saw it on our honeymoon, so good memories there. Excited to see the next chapter in this rebooted storyline, particularly because of a strong cast with Gary Oldman and Jason Clarke involved.


6.) Into the Woods (December 25th)
S: This one is relatively new on my radar but once I saw who was in it, and the premise it was pretty much one that had to be seen.
A: I originally left this film off my list. Then I actually saw the concept and the cast. WOW. Emily Blunt, Meryl Streep, Johnny Depp, Chris Pine, and Anna Kendrick in a film based off a Tony Award-winning musical that puts a spin on classic fairy tales? I'm there. (Hell, I was there just when I read Johnny Depp and Anna Kendrick.)

5.) Godzilla (May 16th)
S: I am going into this movie on the basis that the trailer was awesome and on that basis alone.
A: Yup, me too. If you haven't watched the trailer yet, you need to.


4.) Captain America: The Winter Soldier (April 4th)
S: The first Captain America was one of my favorite Marvel films. It was a good origin story, but, I'm ready for the out-of-his-element Avengers to take the spotlight in what promises to be a really good espionage kind of film.
A: Surprisingly Sarah and I both had this ranked #7 on our personal lists, but when putting together the aggregate ranking for all the films we chose it jumped up to #4. Captain American: The First Avenger isn't my favorite Marvel film, although it's a good one. I've just been hearing nothing but great things about this sequel, and this expanded trailer/film clip only heightened my anticipation for it.


3.) 22 Jump Street (June 13th)
S: We loved the first one. The comedy and chemistry between Channing Tatum and Jonah Hill was so fun to watch the first time around that I really can't wait to see what they come up with next.
A: Agreed. The first film was genuinely hilarious and I loved that it wore it's R-rating on its sleeve. Very excited to see the further exploits of Schmidt and Jenko in this sequel. This red-band trailer is phenomenal.


2.) Guardians of the Galaxy (August 1st)
S: A Marvel movie that seems to be primarily a comedy but still has all the action hero stuff? I'm totally in.
A: Neither of us is completely familiar with the source material here, but we don't need to nor do we care. The first trailer for this crazy-looking addition to the Marvel Cinematic Universe is amazing. This truly looks like the Star Wars film we've been waiting for. August can't get here soon enough.


1.) Interstellar (November 7th)
S: I am ready to see what Christopher Nolan has up his sleeve. This looks like a stellar cast (pun intended) and a really interesting story line, even though I have no idea what it's about.
A: Plain and simple this gets the top spot because it's an original film from Christopher Nolan.  Written by Nolan and his brother Jonathan Nolan, all I know about this film is that it deals with wormholes and it has a kick-ass cast that includes newly-crowned Oscar winner Matthew McConaughey (Nolan jumped on the McConaussaince early!), Anne Hathaway (another Oscar winner), Jessica Chastain, Michael Caine (Oscar winner) and Ellen Burstyn (a 2-time Oscar winner!) In what's shaping up to be another great year for films this was the film that topped both of our lists.

Honorable Mentions
The following films appeared on one of our lists but not the other's, and was ranked too low to break into the combined Top 16:

Maleficent (May 30th): A live-action retelling of the Sleepy Beauty tale but from the perspective of classic Disney villain Maleficent, starring Angelina Jolie in the title role and Elle Fanning as Princess Aurora.

Fury (November 14th): The tale of a World War II tank crew behind enemy lines starring Brad Pitt, Logan Lerman, Shia LaBeouf and written and directed by David Ayers whose last film, the awesome End of Watch, was one of our favorite films of 2012.
Posted by Two Tickets For... at 8:40 PM