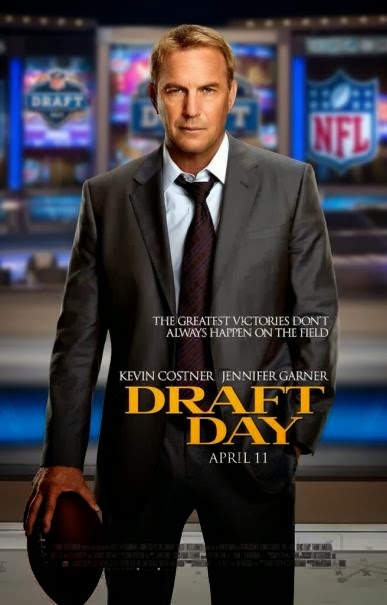 Synopsis: Sonny Weaver Jr. (Costner) is facing a hectic day. It's the first day of the NFL Draft, his girlfriend and co-worker shares the news that she's pregnant, the owner of his team wants him to make a big splash, a stud prospect keeps badgering him and his new head coach keeps butting heads with him. When Sonny does end up making a big splash hours before the draft it has ramifications for how the rest of the day will play out.

Andrew: Hello readers! A couple of days ago (ok, like 4 days ago) we went and saw Draft Day directed by Ivan Reitman, the comedy director of such classics like Ghost Busters and Meatballs, and starring Kevin Costner (Man of Steel), Jennifer Garner (Dallas Buyers Club) and Denis Leary (The Amazing Spider-Man), just to name a few.

In Draft Day Costner stars as Sonny Weaver, Jr., the beleaguered General Manager of the Cleveland Browns and we see all the trials and tribulations Sonny has to face during the biggest day of the year for him.

Right from the start we find out that Costner’s Sonny Weaver, Jr. has lost his father, who just happened to be the former head coach of the Browns that Sonny recently fired, and that his girlfriend and co-worker, Ali (Garner), is pregnant. And all of this is spelled out in the first 3 minutes of the movie.

To kick off this review I'll admit that while Draft Day had been getting a surprising amount of positive buzz I thought the marketing was terrible for it, so I didn't really intend to ever see this in theatres.

Sarah: Which shocked me, actually.

A: Well the trailers and the commercials for this movie didn’t make me want to see this movie. What about you?

S: I can actually say that I never saw a trailer for this movie. So, I absolutely had no idea. I like Kevin Costner, I always have. So I was OK if we saw this one in theatres but I was also OK if we didn’t see it.

I really had no feelings towards this movie at all. To me, this movie came out of nowhere and it could have gone back to nowhere without it even being a blip on my radar. And considering the cast that this movie has, that’s pretty impressive. I said to you going into this movie that I had absolutely no expectations…

A: And now that we’ve seen it?

S:…and now that we’ve seen it, I really enjoyed it! For those of you that don’t know me, I’m married into sports, grew up in sports but I really could take it or leave it. But I love a good sports movie and this was a good sports movie! And from such a different view!

The thing that tends to bug me about sports movies is the games is that they feel like they need to show game action even if nothing particularly exciting or important happens. Draft Day, however, is really from the point of the front office, so it shows the business side of things. It showed a side that I knew about but really didn’t quite understand how it works. I don’t know how accurate it all was, but I enjoyed it! What did you think?

A: I actually enjoyed it very much! As a sports fan there are a few things that I know are different in how they actually go down.

Some nitpicks: a lot of the events that transpire in this film would definitely not happen the day of the draft. For example, even though the Browns start with the number 7 pick in the draft at the start of the film, they apparently hadn't done real research into the overall top prospect, then when they wind up with the top pick early in the film they have to start digging into his background and film. No. They would have thoroughly done that way ahead of time. But for the sake of drama, I understand why they did it.

I really liked it though because, much like you, I liked the front office point of view much like Moneyball it’s about the general manager and how to build the team. I love the NFL and the draft is something I watch every year so this was right in my wheelhouse. But more importantly, I really liked Costner in the lead here. He was the perfect choice for the role.

S: It was all very Costner to me. Not Bah-ston Costner, but more like Man of Steel Costner.

A: Well yeah, and this is right down his wheelhouse: Bull Durham, Field of Dreams, Tin Cup. That’s what Costner does really well - sports movies. But the kind of actor he is now he’s more fatherly now, more of a mature actor. He was a great pick.

S: Dare I say he was a good draft for this movie? (*crickets*)

A: Anyways, he was one of many things this movie did well. This cast was great. I liked Chadwick Boseman (42) as Vontae Mack, a prospect for the Browns. I didn’t like that his character played for Ohio State but whatever. I thought Boseman did well portraying a man who’s anxious about getting drafted. He’s got a family that he needs to take care of so getting drafted is more than just about playing the game.  We liked Boseman in 42 so I’m glad that we got to see him in this as well.

S: Hollywood has really taken an interest in Boseman, so it’s interesting to see him in his second sports movie. This one obviously had a very different feel to his Jackie Robinson but the same passion was there. It was definitely from a football point of view.

A: He’s not arrogant but has a certain confidence. It’s very much like a Muhammad Ali mentality.

S: I really liked his character. When you first meet him you get a very arrogant feel for him but as the movie goes along you realize that this is a guy you would want on your team. He’s a team player. Holds those family values high. So it shows you it’s not always just about a players ability but his values too and how well his personality would mesh with that of the rest of the team. I can’t imagine there’s anything worse that bringing a guy in that doesn’t work well with the rest of the guys and your probably paying the new guy way more than the others.  So I really enjoyed that.

A: Right. I liked Jennifer Garner as Ali. She was very believable as the woman in charge of the salary cap…

S: A position that I didn’t even know was an actual thing.

A: …oh yeah! And Denis Leary was good as the head coach...

S: Even though his voice grates on my ears I thought he brought a good sense of authority plus he was good foil to Sonny. Was definitely a fan of seeing Ellen Burstyn in the movie as Sonny's mom. I loved her in the USA miniseries Political Animals and while her part was small she added another relationship to the film that was relatively believable.

A: Agreed. I thought Arian Foster, who is not an actor but an actual football player, did a really good job in what I figure was his acting debut as another prospect the Browns were looking at.

S: I actually didn’t even realize he wasn’t an actor! He did a really good job, because there were other guys in this movie who were also football players and other non-actors and you can always tell who they are because they tend to be very stiff on screen. The NFL Commissioner is one such man, especially when you put the Commissioner of the NFL in a scene with Frank Langella who is such a seasoned actor. The difference is pretty astounding.

A: So here are some things I liked and didn’t like, let me see what you think. I liked that this movie that at its core was more relationships, Sonny’s relationships with everyone he comes in contact with. So Costner really is the anchor.

I liked that this movie really kept me guessing. It telegraphed some things but then towards the end during the actual draft it got plenty interesting, because what we thought was going to happen didn’t happen. It kept me on my toes.

But that also leads a little to it’s downside. This movie was marketed very poorly. The commercials make it out to be one thing. They make it out to seem like, “Oh my gosh, is he going to trade up to the number one pick?!” That happens actually very early on in the movie so I think it was a bit misleading as to where the actual action and really what the whole movie was about. The marketing really did it a disservice. Made it seem like more of a comedy than what it really was.

S: Yeah, I really didn’t get comedy from this film at all. There were comedic spots, but as a whole as a comedy? Absolutely not. There was comic relief, sure but not much more than that.

A: Something I didn’t like was the split screen movement. Because this movie involves a lot of negotiating by people in different cities people are on the phone constantly, and to get that point across the director did this editing technique where the two people on the phone would kind of move in and out of each other’s screens. It’s hard to describe but it got very distracting and really took away from the scenes.

S: Yes, I understood why they did it but they didn’t have to do it so much throughout the conversations. It made it look a bit cheesy. It had a very Star Wars feel to it and it was a little distracting. I do think the split screens were helpful in showing the different sides of the conversations, though.

A: So that was the main thing that I didn’t like. Again, there were some nitpicky things from a sports aspect that I didn’t quite like but it’s ok. Overall I really enjoyed it, I really bought into the relationships.

S: I actually really liked that it was pretty suspenseful at times, especially during the draft. You just didn’t know what was going to happen next. It really translated well into the audience. I enjoyed the discussions between Sonny and his scouts and coaches as the looked at the different players, it all built up to a conclusion that I did not see coming.

A: I felt, overall, that it did a good enough job overall of conveying the NFL Draft and how some of these things might go down. And it was entertaining, which was really the important thing.

Alright let's wrap this up. Overall what would you think of Draft Day?

S: Costner and company are fun to watch and it keeps ya guessing! It's definitely worth a matinee viewing if you get the chance!


Photo Courtesy: reviewstl.com
Posted by Two Tickets For... at 1:43 AM