Leslie Mann Leads the Way in a Surprisingly Funny Chick Flick: Our Review of "The Other Woman" (2014) 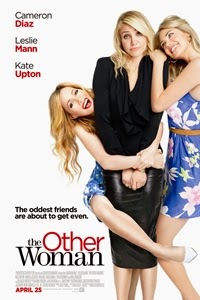 Directed By: Nick Cassavetes (The Notebook)

Synopsis: Carly (Diaz) is a NYC attorney who thinks she's found the perfect man in Mark (Coster-Waldau). But when she makes a surprise trip to his house in Connecticut she meets Kate (Mann), Mark's wife. At first distraught, the ladies form a quick bond and eventually discover Mark's other girlfriend, Amber (Upton). Together the trio devises a way to get back at Mark while becoming the unlikeliest group of friends ever.

(Note: We screened and reviewed this film last Saturday, so we're a little late posting it)

Sarah: Hello readers! We just got out of seeing a movie that, honestly, the only reason we actually saw it in theaters was because Andrew lost a bet! Lost horribly I might add. And that movie was The Other Woman.

Starring Cameron Diaz (The Counselor), Leslie Mann (This is 40), Kate Upton (The Three Stooges) and Nikolaj Coster-Waldau (HBO's Game of Thrones), this rom-com follows the story of three women who are all sleeping with the same man, Mark, played by Coster-Waldau. Leslie Mann plays his wife and Diaz and Upton play two of the mistresses. When they all discover each other they bond over their shared betrayals.

This is one that I thought looked funny ever since we first saw the trailer for it, so I kinda wanted to see it. Now that we have, much to your chagrin I’m sure, what did you think?


Andrew: Well, first, to be fair I thought the trailers were funny and I've always liked Leslie Mann and we like Nikolaj Coster-Waldau who plays Jamie Lannister on Game of Thrones. I was curious to see how he would do in this, and yes I lost a bet, but I liked this movie! I laughed a fair amount of times including some honest belly laughs. It was a funny movie. The premise was…

A: Yeah. It’s sort of straight forward and kind of…

A: Yes, but what really makes the movie is Leslie Mann as Kate. I had read that she was the best part of the movie and it’s absolutely true. She’s such a good comedic actress with both her timing and physical comedy. So she did well. And Diaz was good a the relative straight woman.

S: Well Diaz is supposed to be the main character.

A: Yeah, she’s THE other woman.

S: And then you have Kate Upton who plays the bimbo. Even though she’s not in real life she plays it pretty well here. I thought it was funny! Like you, I thought it was pretty straight forward and the premise extremely silly, but cute! It was kind of a good girl bonding-type-esque movie in a weird sort of way.

A: There’s definitely a woman-empowerment under-current going on. The chemistry between the three ladies was good. Nikolaj was good at his role as the skeezy bad guy, sleeping around.

S: There’s a little bit of over-acting I felt on his part, but for the most part he doesn’t have too many lines so it’s not that big of a deal. This movie was cute! It’s not great but it's cute.

A: No, it’s not great but here’s the thing, looking at this objectively, it made us laugh and made the AUDIENCE laugh!

S: The audience was, of course, mainly comprised of women and they just thought it was hysterical! And that was great! That’s what you want, you want people to laugh. And it did!

All the cheesy lines made me laugh because even they were delivered in a way that was pretty humorous. And don’t get us wrong, this movie was straight up cheese but Leslie Mann’s delivery was so funny! She plays the every-woman so well.

A: And it wasn’t just women who thought it was funny. I was laughing, there was a guy behind us that was really laughing. So it has a little bit of everything for everyone. It was a good date movie.

There was, I thought, a little too much scatological humor, but it all kind of hit. There’s a couple instances of vomiting, there’s a laxative scene which, while not quite to Dumb and Dumber levels, was still relatively funny.

Leslie Mann's character has a gigantic male dog, so you’ve got some dog anatomy humor. So some low-brow stuff. But again, it all comes together and it works.

Truly the strongest part of the movie is when the three girls come together and start scheming against Mark and figuring out what they’re going to do to him. I thought that was when it really hit its stride. Up until that point it really kind of lagged.

S: It was kind of slow up to that point, yeah. It took a little while to develop the relationship between Kate and Carly and then they just threw in Kate Upton’s character, Amber. So, it struggled a little bit until then.

Here was my biggest complaint: I HATED the literal soundtrack. It was so on the nose it was painful to listen to.

A: There was an especially bad rendition of “Love is a Battlefield.” So yeah, that was a little odd but I’m not going to mark it down too much for that. I will knock it down a little for not having more screen time for the relationship between Diaz’s Carly and her romantic interest Phil (Taylor Kinney), who is Kate's brother. They have this budding relationship that takes place in all of three or four scenes and it just felt a little forced.

I mean, it was what it was, and that was entertaining. It’s not going to win any awards but I bet it does very well at the box office because it hits a very big demographic, women. So movies like this, as with Bridesmaids and The Heat, while this isn’t to the same caliber, will do very well. [Editor's note: The Other Woman did in fact take 1st place at this past weekend's box office with $24.7 million]

S: Also because it’s been a little while since there’s been a funny girl comedy to go see! Like The Heat came out last summer. So this is not the cheesy, romantic movie that just falls into the “just date-night” movie but is also great for a girl’s night out! It definitely hits a couple of categories, so I agree that it will do well in the box office. While it was simple in it’s nature, it was a fun way to kill an afternoon.

A: It was a good movie to tide us over until the summer movie really kick off starting next week with the new Spider-man movie.

FINAL VERDICT: A good film to catch on a Saturday matinee!