Adam Sandler's African Vacation Has Some Chuckles, Not Much More: Our Review of "Blended" (2014) 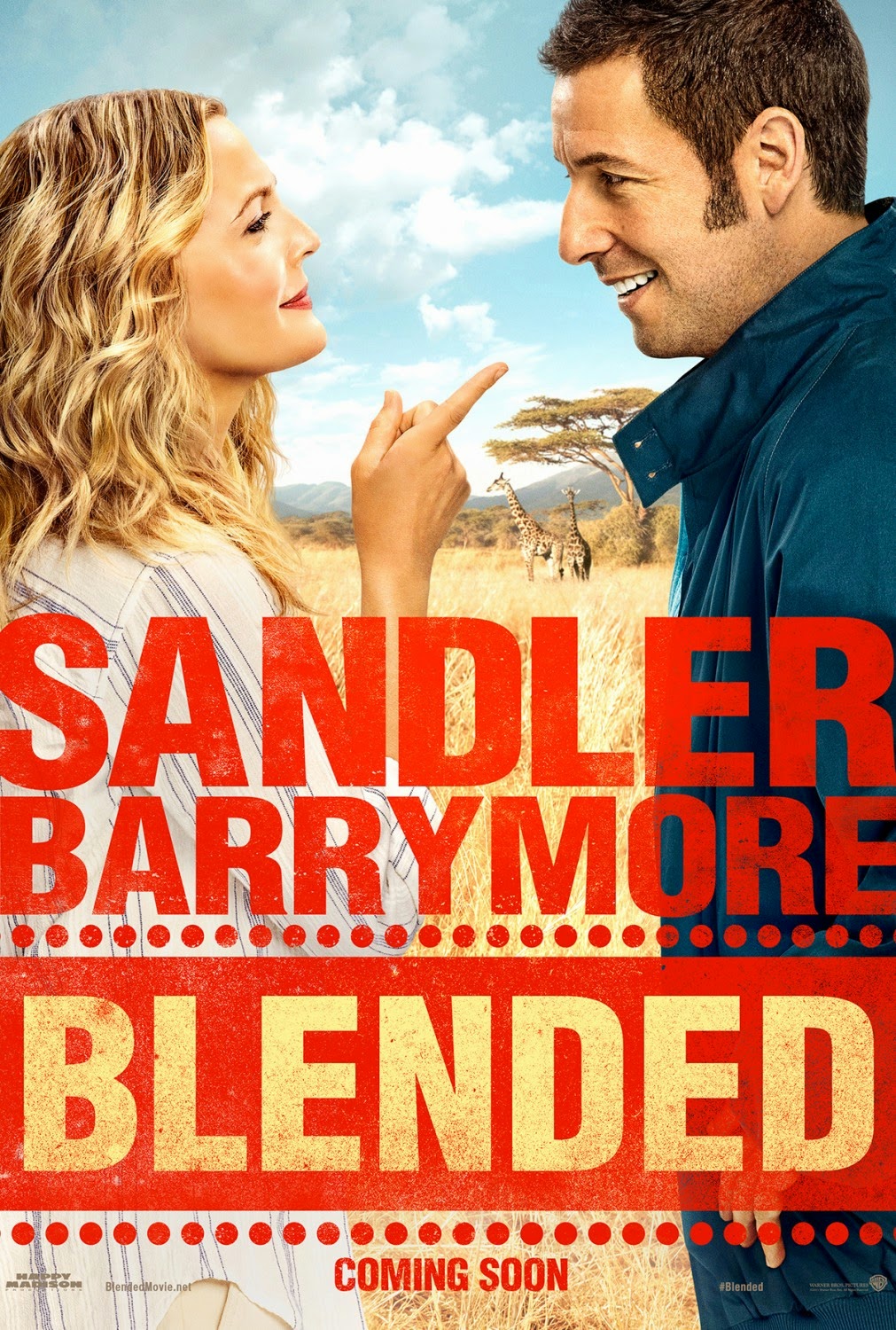 Directed By: Frank Coraci (The Wedding Singer, The Waterboy)

Rating: PG-13 for crude and sexual content, and language

Synopsis: Jim (Sandler) is a widower with 3 girls to raise. Lauren (Barrymore) is a divorcee with two boys to raise. After Jim and Lauren go on a disastrous blind date, they manage to finagle their respective ways to an African "blended family" trip originally planned for Lauren's co-worker and Jim's boss. Hijinx ensue as the two families start to bond.

Sarah: Hello readers! Last night, Andrew and I were looking for some laughs, some yuks, if you will, so we checked out this past weekend's new comedy, Blended, starring Adam Sandler and Drew Barrymore! This is the third movie that the pair have made together and not one that I would say that we were looking forward to, but nonetheless, here we are with a review on it. And I have to say it definitely delivered on some cheap laughs!

What did you think of it?

Andrew: Oh man, where to start? Let's preface this by saying we, together, are not big Adam Sandler fans. I like his stuff more than you do, like The Wedding Singer, Mr. Deeds and The Waterboy being a few of his movies that I'll watch anytime I come across them on TV. But as a duo we actually do have a horrible secret - we actually find Grown Ups funny, and got some chuckles out of Grown Ups 2. We're not saying they're good movies per se, but they make us laugh for whatever reason.

So after saying all of that, that's what my reaction to Blended is. It's not a good movie but it hit the spot in regards to making us laugh when we just wanted some chuckles.


S: Oh heavens no, it was…not good. But I clearly remember saying before we walked into the theater that I expected three things: bodily function jokes, topical humor and over-the-top supporting characters that borderline racist. Yeah, it did not disappoint. It had all those things and they seemed to be amped up a little bit. In that respect, at least I knew what I was getting into and I still went along with it. There is something to be said for predictability when your looking for something silly to watch!

A: That's fair enough, and it's a good way of saying that this is just another Adam Sandler movie like 50 First Dates, Click, the Grown Ups movies, etc. So like you said, you know what you're getting into before you get in the theatre.

But I do want to point out some positives in it's favor. First and foremost, Sandler and Barrymore still play well off one another. They had good chemistry in The Wedding Singer, good chemistry in 50 First Dates and that chemistry is still alive and well here. In fact, it's not a stretch to say that Barrymore is the perfect romantic interest for Sandler in his films because she's not the bombshell kind of actress Sandler has been using lately (think Selma Hayek and Brooklyn Decker) and because she's actually a good actress with good comedic abilities. They were also a very believable pair in this film.

The African setting was gorgeous, so it was never a bad thing when they cut to scenic shots of animals running around, and the sets were pretty fantastic. But sadly this film used Africa as an opportunity to do a visual gag of seeing a pair of rhinos getting freaky or a giraffe French-kissing the romantic interest for one of Sandler's characters' daughters.

S: So here's the thing: I don't know if Sandler and Barrymore necessarily have great chemistry. I see it more of friends just getting together and making a movie. But I feel that way about all the costars in Sandler's films. I'll agree with you, though, that the two really seem to have a lot of fun which is important.

I did really like the Africa scenes, but the majority of the story definitely happen state-side. It was a cute film but I felt like some of the comedy chops were wasted. Especially when it came to Wendi McLendon-Covey (Bridesmaids) and Terry Crews (FOX's Brooklyn Nine-Nine). They were funny, but in more of a stupid kind of way. It was a little disappointing.

A: I agree with you that McLendon-Covey and Crews were wasted. They're both supremely funny people and Crews especially was wasted here as the leader of a pseudo-Greek chorus (or should I say African chorus?). At least McLendon-Covey was a means to an end for getting the bulk of the story moving, but this brings me to a point I wanted to make sure I made.

Blended is a perfect example of how some Sandler movies could actually be very good movies if you just cut our the extraneous, sophomoric humor. Cut out the bad jokes about animals having sex, or the recurring joke of the manager of the African resort mispronouncing names, or all of Crews' scenes and you'd actually have a touching movie about two different families coming together, or "blending" if you will.

Sandler's Jim has three daughters that he's having trouble raising on his own after his wife passes away, while Barrymore's Lauren has two rambunctious boys who need a solid father figure in their life after their mother divorces their deadbeat dad (a wasted Joel McHale). Two different but relatable circumstances and I felt like this movie did a very good job of portraying the emotional beats. It's all rather straight-forward stuff, but Sandler, Barrymore and the kid actors do a great job of making you feel for where they're all coming from. Like that "Somewhere Over the Rainbow" scene? That's good stuff.

And Sandler's movies do that from time to time, like Click is very juvenile at times but always gets to me because of its message and portrayal of not taking the time you have with loved ones for granted, you know?

S: You took the words right out of my mouth with that last bit. So let's wrap this up. Overall I think it's a cute premise but felt a little forced. It all seemed a little cliche and done before. But the cheese was just what the doctor ordered and I appreciated that.

A: We went in looking for some laughs and the movie delivered, even if it was pretty uneven. Bottom line is that if you like Adam Sandler’s movies he’s been putting out since Mr. Deeds in 2002, you’re probably going to like this one. If you don’t, you most likely won’t be seeing this to begin with. And that’s okay.

FINAL VERDICT: Netflix it if you like Sandler’s movies, otherwise skip it

Photo Courtesy: watchplayread.com
Posted by Two Tickets For... at 10:05 PM