MacFarlane's New Film is Classic MacFarlane, For Good and Bad: Our Review of "A Million Ways to Die in the West" (2014) 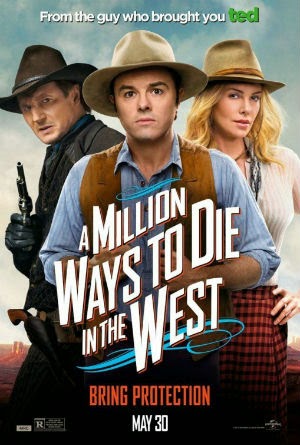 Rating: R for strong crude and sexual content, language throughout, some violence and drug material

Synopsis: Albert (MacFarlane), a cowardly sheep-farmer, gets dumped by his girlfriend Louise (Seyfried) in favor of the more dashing and richer Foy (Harris). During a bar brawl, Albert steps up and saves the new girl in town, Anna (Theron), from being seriously hurt. Impressed by Albert's heroics and wanting to help him win Louise back, Anna helps train Albert in gun-shooting so he can win a duel with Foy. But unbeknownst to Albert, Anna is the reluctant wife of Clinch Leatherwood (Neeson), the deadliest outlaw in the land, and who will eventually be arriving in town.

Andrew: Hello dear readers! We're back yet again after seeing only one of this past weekend's two big releases, Seth MacFarlane's new comedy A Million Ways to Die in the West. This is MacFarlane's second feature film directorial effort following the smash hit that was Ted. This time he took things to the Old West and decided to cast himself in the star role of Albert, a cowardly sheep-farmer, but surrounded himself with some more than capable actors in Charlize Theron, Neil Patrick Harris, Amanda Seyfried and Liam Neeson to name a few.

Sarah, as some of our readers might know, we're big fans of MacFarlane's work with Family Guy and we loved Ted. So we were certainly looking forward to seeing how this one would fare. And now that we've seen A Million Ways to Die in the West, how did you feel it fared?

Sarah: Yes, I was really looking forward to this one. To say we're big fans is a bit of an understatement. Family Guy is pretty much quoted once a day, at least, in this house.

Now that we've seen A Million Ways to Die in the West, I have to say, I'm a little let down. And here's why: it wasn't because of the jokes, those were gold, it was that we heard all of them in the trailers! There were some great set-ups for the jokes that we had already seen, but it was still a disappointment because we knew the punch-lines. What did you think?
A: I think it's a fair critique to say that I a lot of the best jokes were used in the trailers. There were a LOT of jokes, though, which is MacFarlane's M.O. but the problem is that a number of them just fell flat. And maybe part of that is because MacFarlane himself was the star and he's just not a good actor, so he was trying a little too hard. He seemed a little too pleased with himself after making a number of jokes, whether they worked or not.

Now don't get me wrong, I laughed a lot during this movie. Some were just chuckles, some were big belly laughs, but none of them had me near tears like Seth Rogen's Neighbors did the other week. And quite frankly the story here just doesn't matter, so unless you're a big MacFarlane fan, this movie doesn't have a lot going for it.

But we are MacFarlane fans, so there were a number of things we enjoyed. What were some of the parts you liked best?

S: I really liked all the supporting actors in this one, particularly Giovanni Ribisi (Ted) and Sarah Silverman (Wreck-It Ralph). They were hilarious as the town cobbler(?) and local prostitute who are dating and making it work in the Wild West. Their romantic chemistry wasn't great but their comedic timing off of one another was so funny.

Also, I mean, Neil Patrick Harris (How I Met Your Mother). He is just so great at physical comedy and he knocks it out of the park in this one, in a much more R-rated version of what we're used to from him.

There were also some really great cameos in this movie. They were so random, so we're not going to give any of them away, but still, great.

A: I agree with you on Ribisi and Silverman, though for the most part a lot of their good stuff was spoiled in the trailer. Still, the running gag about her being the town prostitute but the two of them waiting for marriage before having sex was funny. There were some other funny running jokes that tickled my funny bone, like how nobody smiled in photos back in the 1800s.

NPH did well with what he was given here, which wasn't a whole lot. Still, always great to see NPH so it was good casting on MacFarlane's part. This wasn't necessarily like his appearances in the Harold & Kumar movies but he certainly does seem to enjoy play nasty characters when he gets the chance.

I was actually partial to Charlize Theron's performance as Anna, the wife of Liam Neeson's killer outlaw, who befriends Albert and teaches him how to not be such a wuss. She was funny and played the straight-shooting cowgirl very well. She was also the only one who I felt in this whole movie, had this not been a comedy and was just a straight Western, would've made the transition perfectly. So kudos to her.

I liked Neeson as the bad guy, but contrary to how the film has been marketed he's really not in this movie a whole lot. MacFarlane's Albert isn't learning how to shoot a gun to fight him but instead with NPH's Foy, who stole away Albert's girlfriend Louise, played by Amanda Seyfried. So I felt like Neeson was a bit wasted here, which is a shame because he can actually be a pretty funny actor when he wants to be I think.

S: YES! I was so bummed it wasn't actually Neeson who was the one he was learning to shoot for! I think that would have made for a really funny plot line. I think that he was definitely wasted in this movie.

Now, let's talk a little about MacFarlane, because while we love his voice acting, he did seem to struggle a little on this one as far as live acting went. I felt like the voice and the acting didn't quite flow together. Almost like he thought that by doing the lines right, the acting would just follow. Not the case. And it's such a shame because he is really easy on the eyes! But as far as acting went, it was just...not good.

A: Yeah, like I mentioned earlier I think MacFarlane was a weak spot in this film just from an acting standpoint. He's a phenomenal voice-actor on his TV shows and he was great as the voice of Ted in Ted, even though you could easily argue he was just doing a variation of his Peter Griffin voice. But he's clearly not a true actor, nor was he ever really trained to be one. He's a very good singer and voice-actor, not so much an actor.

I do want to say that I think MacFarlane has a fair enough eye as a director, though. Ted was relatively straight-forward except for the fact that one of its main characters was a CGI teddy bear, so that's enough of a tough thing to tackle for a rookie director. For his sophomore effort he went a little bit bigger by shooting in the desert, building an entire town, using these great sweeping helicopter shots of the land, etc. He did well to bring back his cinematographer from Ted, Michael Barrett, plus I thought the score by Joel McNeely was very good for a Western. It hit all the right notes, if you know what I mean.

S: Oh yeah, his directorial eye is really quite amazing. He has had a lot of practice though with Family Guy and his other television shows. And that cinematography, wow! If you didn't know any better you might think that it was all stock footage and sound stage work. It was so beautiful!

I do have to go back and say that I really like Theron in this movie. I know you mentioned it earlier but we don't get to see her in funny roles and she wasn't like roll-on-the-floor hilarious, but her dry sense of humor lent herself perfectly for this role. And she's gorgeous so that totally helped too.

While it wasn't super original, I really enjoyed the comfort of knowing the type of humor I was getting into.

A: Alright so let's start to wrap this up. Give me your closing thoughts on A Million Ways to Die in the West.

S: I chuckled in this movie, and I really wanted to love it! At the end of the day, though, I think as far as MacFarlane movies go, Ted  is much better. You get all the classic MacFarlane jokes, without the struggling performaces.

This one struggled a little bit with its lead role, but it was a beautifully shot movie and the supporting cast was a delight to watch. It was also nice to have such a straight forward concept. But, c'mon trailer people, lets not give away all the jokes in the trailers!

A: It definitely made us laugh at times, but overall it's just very spotty and kind of all over the place. Again, if you like Seth MacFarlane's stuff, you'll probably enjoy this. If you don't, then you probably won't. Just the way it is.

FINAL VERDICT: A good to way to kill a Saturday afternoon.