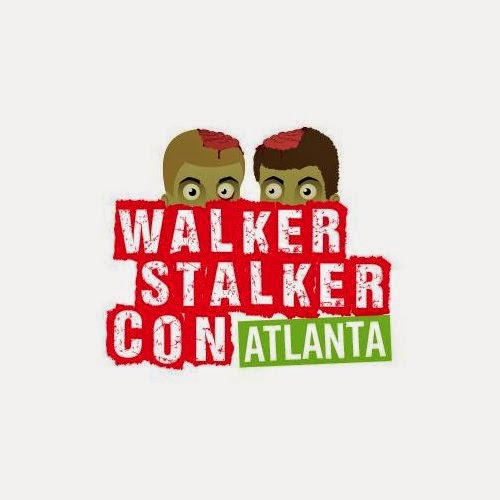 Andrew: Hello dear readers! So we've been positively awful about posting our most recently recorded review, the Robert Downey, Jr. drama The Judge. While we promise we'll be posting that sometime soon, we are VERY excited for the next few posts we'll be posting here on Two Tickets For…!

This past Saturday we hit up the 2014 Walker Stalker Con here in Atlanta. It was a personal first for us here at Two Tickets For… as Sarah and I had never been to a convention before, so when we heard a radio promo for this The Walking Dead-centric horror/sci-fi convention, we jumped on the chance to attend.

I could spend some time trying to come up with the best, succinct way to explain this convention, but I'll just let the "About Us" page from walkerstalkercon.com do the talking:

"Walker Stalker Con is the fruit of The Walker Stalkers Podcast with James & Eric. The podcast began with an amazing trip to Senoia, GA where James & Eric were able to view the set of The Walking Dead and meet the incredible actors from the show. As a result of this experience, a podcast began and then the idea of a convention focused around recreating that same experience with the cast and crew of the show, along with talented actors and artists from other zombie shows, movies and art.
Walker Stalker Con is not just a convention. It is a fan meet-up and an opportunity for each guest to come away feeling like they’ve had an amazing experience and became part of a greater community of zombie lovers! Walker Stalker Con is three days of events, panels, and experiences that zombie fans won’t find anywhere else!"

Guests that were present at the 3-day weekend included most of the cast of The Walking Dead, past and present, headlined by Andrew Lincoln and Norman Reedus. Other notable guests from the hit AMC show included Steven Yeun (Glen), Lauren Cohen (Maggie), Melissa McBride (Carol), Chandler Riggs (Carl), Laurie Holden (Andrea) and Michael Rooker (Merle, also hot off of this summer's hit Marvel film Guardians of the Galaxy); plus The Vampire Diaries stars Ian Somerholder and Paul Wesley, and Game of Thrones star and future big-screen Aquaman, Jason Momoa. Notable guests who were previously scheduled but had to drop out included Danai Guriri (Michonne), Jon Bernthal (Shane), and David Morrissey (The Governor).

We could only attend the Saturday session, which happened to be the biggest day of the event. We were able to hit three of the five Walking Dead panels - executive producer/lead makeup and special effects artist/occasional director Greg Nicotero; "Abraham's Army": Michael Cudlitz (Abraham), Josh McDermitt (Eugene) and Christian Serratos (Rosita); and the highly-anticipated "Bromance" panel of Andrew Lincoln (Rick) and Norman Reedus (Daryl). Because of the tightly-packed schedule we were unable to attend Riggs' panel (he originally was scheduled to be with Guriri, but she had to bail) and regrettably we couldn't attend the "The Grove" panel that consisted of McBride, Chad Coleman (Tyreese) and Brighton Sharbino (Lizzie). We also weren't able to catch Momoa's solo panel, as it was on the secondary stage right before the Lincoln/Reedus panel, so we were already in line for that one.

Starting today and over the next few days, we'll post an entry a day about one of the panels and we'll finish with a fun little post about meeting a pair of our favorite contestants from SyFy's hit movie makeup competition show, Face Off, and some sweet swag we picked up. These posts will primarily just be highlights of the cast's panels along with photos Sarah was able to take. We hope you enjoy these posts for what they are - your way to vicariously attend the Walker Stalker Con through us!

We'll kick things off tonight with what was maybe the least attended and yet most informative panel - Greg Nicotero! His panel was so informative, in fact, that we had to split up his talking points into two separate posts just to avoid reader (and editor) fatigue. So expect those to hit our blog tonight! Sorry for the delay!