Daniel Radcliffe Devilishly Moves Beyond His Wizard Past: Our Review of "Horns" (2014) 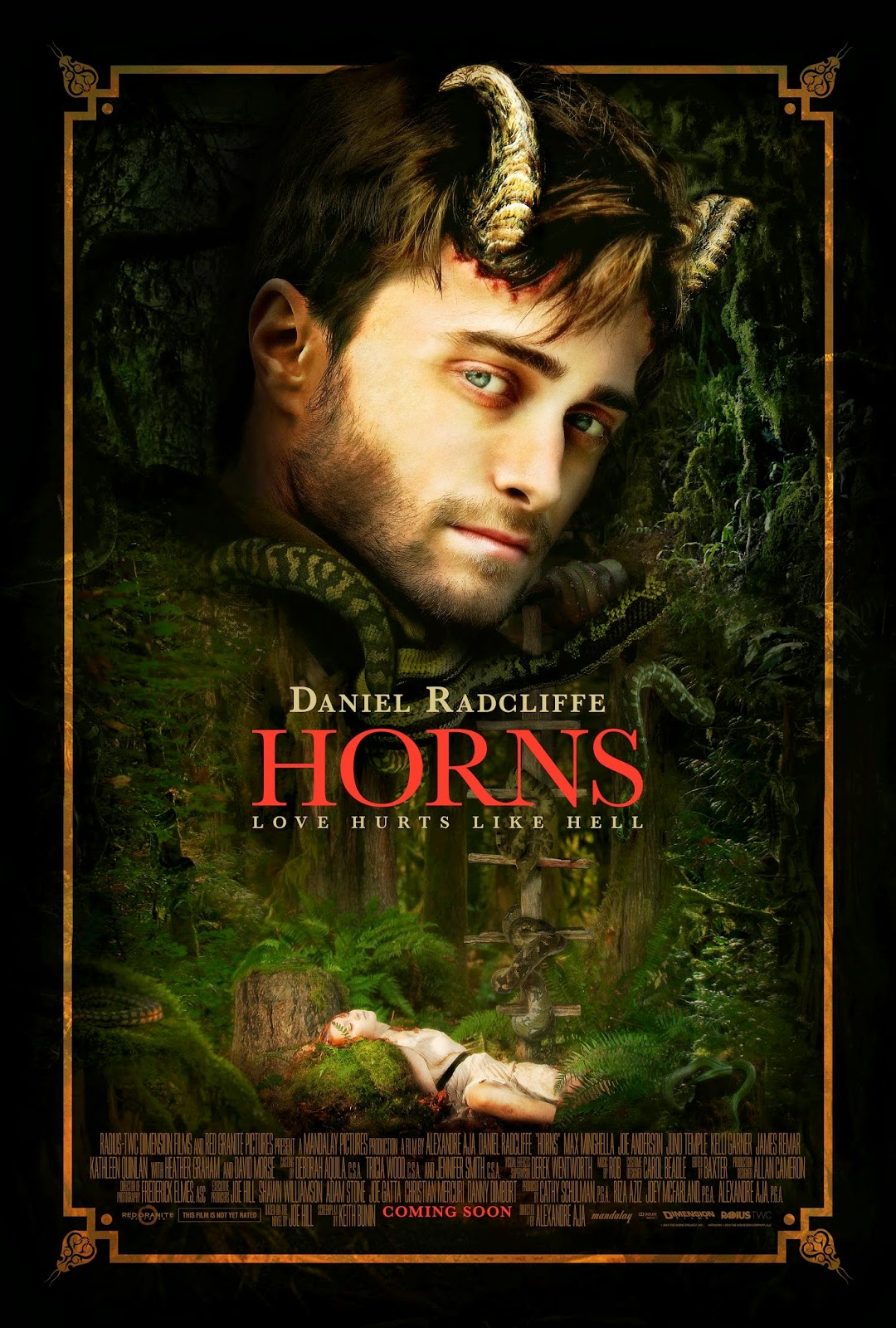 Rating: R for sexual content, some graphic nudity, disturbing violence including a sexual assault, language and drug use

Synopsis: Ig Perrish (Radcliffe) is the prime suspect in the murder of his girlfriend, Merrin (Temple), though he proclaims his innocence. After a night of hitting rock-bottom, Ig wakes up with a growing pair of Devil's horns that spur everyone he talks to to disclose their deepest secrets and imbues him with some devilish powers, which he uses to solve his girlfriend's death.

Andrew: Hello dear readers! We know we've been bad again at posting our reviews, as we actually have two recorded reviews done that just need to be transcribed and posted, but we're here today with a quick review on a perfect Halloween season film that Sarah and I watched On Demand last night - Alexandre Aja's Horns, starring Harry Potter himself, Daniel Radcliffe.

Horns is an adaptation of the book of the same name written by one of my favorite current authors, Joe Hill. Hill is a well-known and popular writer in the horror genre and comic book community for his comic series "Locke & Key", but he's not quite on the general public's radar just yet which is a damn shame because his 3 novels - Horns, 2007's ghost story Heart-Shaped Box, and last year's vampire yarn NOS4A2 - are all fantastic and definitely up-to-par with his father's work. It's probably worth mentioning that Hill's father is Stephen King, and that Hill made a name for himself with Heart-Shaped Box and his short story collection 20th Century Ghosts before people discovered his lineage.

Back to Horns, in which Radcliffe stars as Ig Parrish, a young man whom everyone in town believes recently killed the love of his life, Merrin (The Dark Knight Rises' Juno Temple). Ig is the only suspect and even his family is skeptical of his proclaimed innocence. One night Ig gets wasted and wakes up the following morning sprouting a pair of horns, and his horns seem to have an effect on people wherein they can't help but tell him their deepest, darkest secrets, desires or just the straight effed-up truth, while giving Ig a bit of influential power to make people do what they're already inclined to do. Using his new powers, Ig goes on the hunt to discover who really killed his love.

Sarah, while this was a book I absolutely loved and was excited to see the film for, this is one I kind of had to talk you into renting since you thought it might be scary. Now that we've seen it, what did you think of Horns?


Sarah: Well, it definitely wasn't scary, per se. It was more intense than anything. The confessions that Ig seems to be able to draw out of people are so terrible and horrifying at times that's they border on humorous. They're just absurd! But while I thought this movie was super weird I actually kind of liked it! It had a familiar cast and with this being the first non-Harry Potter Daniel Radcliffe movie I've seen, I have to say I was pretty impressed.

And I LOVED the devil horns aspect of this movie. It was so cool! Although that ability to be the devil's advocate really would be a terrible burden. But the imagery throughout this move was just stellar. I can only imagine that it came directly from the book.

A: I will say that the film adheres to some aspects of the book pretty closely, while also making some changes for the adaptation that at least keep in line with the general story. Noticeably to me they moved the location of the film from New England to the Pacific Northwest, they changed the occupation of Ig's best friend Lee (played by The Social Network's Max Minghella) from a congressman's aide to a lawyer, they cut out a fair amount of backstory concerning a particular character that would've taken away from the murder mystery aspect the film was going for, and the finale has some changes to it as well I believe.

Overall though, the spirit of the book is all right there in the final film, which I enjoyed. The horns and the powers that Ig gains from them are perfectly executed in the film and the horns themselves look great. The transformation that Ig goes through while turning into the Devil is pretty impressive, particularly his final transformation in the climactic scene.

So here's something I'm sure you may not have been expecting: Horns is a bit of a romance story, too. It heavily deals with Ig and Merrin's relationship from when they meet as teenagers up to their final time together and even beyond. What did you think of their romance and how that was handled in this film?

S: I liked it! Didn't love it but it definitely provided a driver for the film. It's such a tragic romance but pretty realistic. This small town must have such a shortage of ladies though, because Marrin is a hot commodity! That, I had a little issue with. Does this chick have magic lady-bits?! I kinda think that aspect of the story was kinda a cop-out. It just seemed like a little heavy handed.

Was that just me?

A: I don't know, I think part of the whole town's infatuation with Merrin was that the film (and book) are deliberating contrasting her angelic-ness to Ig's newfound devilishness. It also made it seem that many people could've been the real killer because of their lust for her. At least that's how I looked at it.

I will say though, and this is having read the book years prior, I was still hit with a bit of emotion during a particularly big emotional scene for Radcliffe's Ig. I had completely forgotten that plot point and it kinda made me verklempt all over again just like the book did. So I think the relationship aspect between Ig and Merrin was a success because I was buying what they were selling.

S: Well, it was something, I'll say that.

I just enjoyed this movie overall. I thought that the make-up was top-notch and, like I said, the cast was impressive. The story could have been a little more meaty for my taste, I just felt like there were some things missing, but other than that I felt like it was a good alternative for the typical horror film for Halloween. This is the type of movie that even I can get around! And I love that, because not all of us want to sleep with every light on in the house after watching a paranormal flick.

A: It definitely wasn't scary, per se, as you've said, but I think it fits that supernatural feel that goes along with Halloween. There are some pretty cool shots of Ig with his horns that made us both go, "Okay that was cool." I can get around any movie like that. It certainly helps, in my opinion, that this was directed by Alexandre Aja who is one of my favorite horror directors. This isn't nearly as gory as some of his other stuff like High Tension or his The Hills Have Eyes remake, and I'm okay with that. There was one particular scene that has some gore in it, but because there wasn't anything else like it before it kind of had more impact.

Let's quickly talk about Dan Radcliffe because we haven't even touched on the fact that he uses a pretty spot-on American accent in this film.

As a whole though, it was really good to see Daniel Radcliffe in a role other than Harry Potter. He really has proven, along with Emma Watson, that there is life after HP World.

A: Ok yeah, there were a few times where a certain word he said sounded a little British, but overall I thought his accent was good and I felt like this was a good performance from him. I especially loved the scenes where his character really embraced the devil side of him and seemed to enjoy it. Not only was he funny at times like that, but he was very believable.

Lastly let's talk about the supporting cast real quick. You mentioned it was a good one earlier, but other than Minghella and Temple we haven't said who was in it. James Remar does well as Ig's father. I like Remar because of his role as Dexter's father in Showtime's Dexter, but I know you like him from his role in Sex in the City. Another father in this movie is Merrin's father, played by David Morse, who deftly handles a man who's life has been shattered because of the loss of his daughter. Morse is a solid actor and he does well here in small screen time.

Joe Anderson (Across the Universe) plays Ig's older brother and he's fine here, nothing special. Kathleen Quinlan (Apollo 13) plays Ig's mother and she has one great scene where she tells Ig what she truly thinks of him. I enjoyed her presence here, too, because she's done genre stuff like this before including Aja's The Hills Have Eyes and I just watched her the other day when I watch Twilight Zone: The Movie on Netflix. And Minghella, as Ig's buddy Lee, does well with what he's given, which isn't too much for the most part. I actually think his role was undercooked compared to the book, but Max did what he could with the role.

S: I think that the cast does an admirable job here with an interesting subject matter. It's eclectic, and for those that appreciate things like that, I think they'll find this fun!

Ok, so all in all, I enjoyed this movie. Like I said, it's fun and entertaining and not at all what I was expecting.

A: As a fan of the book, I'm sure I could be a little harsher on this film, but Aja, his cast and his crew did a good job adapting it. It's alternate a funny and sad dark comedy with a little horror genre thrown in. I'd recommend renting it On Demand at home rather than seeing it in theatres (it opens in theatres on Halloween), but give it a try. And maybe more importantly, seek out some of Joe Hill's books, because they're great.

FINAL VERDICT: Rent it On Demand or wait for Redbox!