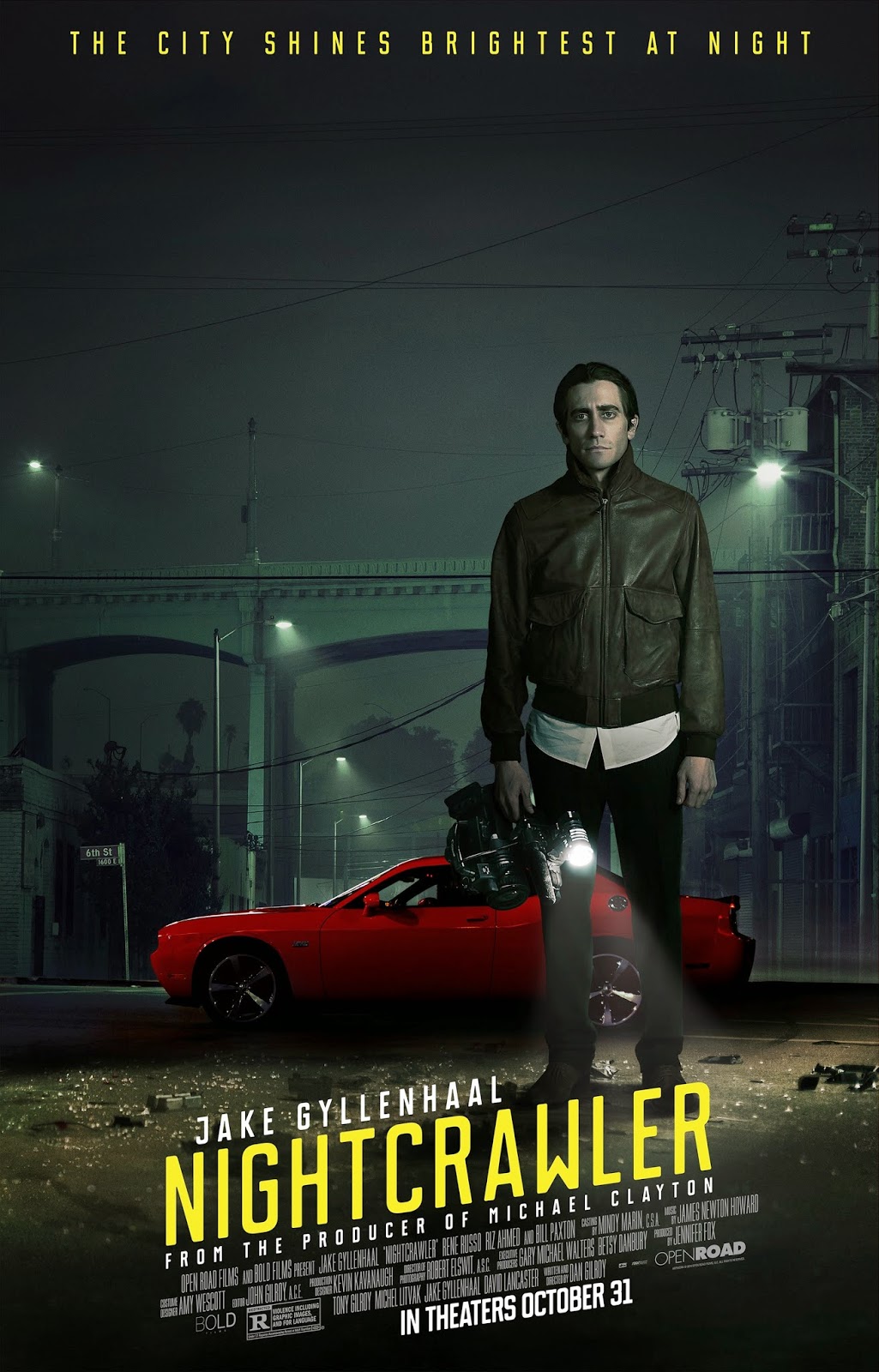 Sarah, this was a film that I'd been hearing great things about for a while now, particularly how great Gyllenhaal was in it. Now that we've seen Nightcrawler, what did you think of the film and particularly Gyllenhaal?

Sarah: I liked Nightcrawler. It thought it was an interesting concept, but the real draw to this film was Gyllenhaal. He was electric on screen. And SO creepy! He was gaunt and almost unrecognizable and you are really watching him become more and more obsessed and delusional throughout the whole thing. But what's crazy is when his outer shell starts to crack and you really see the madness within. It was a character that became more uncomfortable to watch as the movie progressed.

What did you think of the movie?

A: I thoroughly enjoyed Nightcrawler for a number of reasons, which I'll detail a little bit later, but Gyllenhaal is absolutely the draw here. Gyllenhaal has been doing some fantastic work in the last decade with his roles in Brokeback Mountain, Zodiac, Jarhead, End of Watch, Prisoners, Enemy and I'd even throw Source Code in there. He's actually had a great career thus far with only a couple of stinkers like Prince of Persia: The Sands of Time. But I think this could finally be the role that opens people eyes to the fact that the kid from Donnie Darko is one of our best working actors today. He's phenomenal in this.

You're right - he is SO creepy here, and in a great way. Gyllenhaal's Lou Bloom is a classic anti-hero. He is not a good guy, as we're shown right off the bat. He's certainly a little unhinged. But you have to admire the way he takes this new profession of his seriously, even if he does some incredibly grey things, or straight up bad things, to get the edge over the competition and to become the best.

He's meticulous, methodical, he does his research so he knows what his ultimate plan is, and he won't let anything stop him. It's fascinating to watch and Gyllenhaal is electric in the role. It's very reminiscent of his performance in Prisoners to me, which I thought was Oscar-worthy, and I definitely think he's in contention for a nomination here, too.

S: You can tell he's definitely at a place in his career that he's taking on more advanced character study roles. Like Prisoners, Gyllenhaal put himself through the ringer in order to become the character down to the last detail. While he lost a bunch of weight for this role, I think I read it was like 20 pounds, you can still see that he retained some of his physique, so we're not entering into Christian Bale in The Machinist territory, but it's those eyes. They are huge and expressive normally, but with the weight loss he's positively bug-eyed. That just enhances the night-owl effect for this role.

But like I said, I liked the movie, but was more blown away by the performance. It was a story that I felt was there just to enhance the performance and not the other way around. Does that make sense?

A: I think that makes sense. The plot revolves primarily around this character's descent into the rabbit hole of the world he's discovered. I will say, there were certainly a number of turns the plot took that I was not expecting. For a bit there I thought I knew where the movie was going to go, but it would end up going somewhere I didn't expect and that was refreshing. There were certainly a number of times in this film that I was caught off guard, and even once where my jaw-dropped. So kudos there to Dan Gilroy, who both wrote and directed Nightcrawler.

Speaking of Gilroy, he is the younger brother of Tony Gilroy, who has written every single film in the Bourne series and also wrote and directed the great George Clooney film Michael Clayton. Tony produced this film but it was his brother Dan who really created this film.

Dan's known for having written a few films like Real Steel and The Bourne Legacy, but this is his directorial debut and it's a beauty. He gets great performances from Gyllenhaal and Rene Russo, who plays the local news director that Lou creates a working relationship with; plus the script is very strong and the film looks amazing. I haven't seen a film that makes Los Angeles like it does here since maybe Michael Mann's Collateral.

S: I was just going to say that! I haven't seen a movie that puts L.A. in this kind of light in a while. Or should I say, darkness. The movie obviously takes place mostly at night, so it's really gritty and shows such a dark side to a city that we typically know as the glittery, "Tinsel Town" Hollywood. It was the perfect backdrop though for this dark, twisted character to be living in.

Now there were times when I felt this movie was a little slow. It would drag for a bit and then we would jump ahead in time. That was a little jarring at times. And I kind of wish there had been more focus on the climactic story chase. I felt like it was a little pushed at the end.

A: I can see what you're saying, but I didn't really have a problem with it. There was certainly a time jump during Lou's ascension in the business but I feel like it was necessary since we didn't need to see him grinding it out too much. The film did take the time to show him hiring an assistant, Rick (played very well by the relatively unknown Riz Ahmed), and what their relationship is like, but there's definitely a time jump in there.

I will agree that a particular chase in the final act seemed a bit rushed, but I also felt that it was fitting for the natural feel of a chase like that. It was fast, it was jarring, I think it had the intended effect. It was a little polished at times but it certainly wasn't any Fast & Furious kind of car chase. I liked that about it.

I also feel like we should touch on how great this film does at really hitting home on what local television news is. They really hammer the fact that local TV stations chase viewership with crime, fear, and bloodshed. And that's certainly nothing new. Someone in this film actually says the phrase, "If it bleeds, it leads," and that's been true of TV news for a while now. But this film really delves into what could make a certain station take a chance on some riskier stuff just to stay afloat in a tough market. Gyllenhaal's Lou even has a great little monologue explaining his position of power over Russo's news director by dropping all kinds of facts regarding news viewership and the amount of time local news puts towards things like government and health news compared to crime and fear-mongering that he's helping her with. It's great stuff.

S: It's very true. It delves into the world that you and I are not unfamiliar with, so that was kind of fun to see. We learned the "If it bleeds, it leads" motto in college. That real-world mindset was just another layer to the gritty feel of this movie.

I have to say though, that if it wasn't for the intense, captivating performance by Gyllenhaal, I'm not sure how much I would have liked this movie. But that performance was enough to get me through it. I know that might sound strange, but if you see this movie, you would understand.

A: I was interested enough in the world the film takes place in that I think even with another actor in the lead role I would've enjoyed it, but Gyllenhaal is certainly the heart of the movie as it is. If you see this movie, see it for Gyllenhaal.

So let's wrap this up, Sarah. What are your final thoughts on Nightcrawler?

S: I'm with the same thoughts as you. If it wasn't for Gyllenhaal, I think this movie would have flopped. It's an interesting premise though and I had fun watching the character development. Definitely Oscar-worthy, especially Jake's performance which is just going to make him a contender for what's shaping up to be the toughest Oscar category EVER!

I'll give this one a 4/5 for the stunning performance.

A: As I said earlier, I thoroughly enjoyed this film. It's a movie such as this that makes me scoff when people lament how terrible movies are nowadays. It's been a great year for films and the fact that a movie like this is in theatres along with films like Gone Girl and Fury make me hope people give this one a chance, because it's a really good one with a great lead performance by Gyllenhaal. I'm actually going to give this one a 4.5/5.

Photo Courtesies: Fandango, Open Road Films
Posted by Two Tickets For... at 8:52 AM