This Isn't Your Average Horror Movie: Andrew's Review of "The Cabin in the Woods" (2011) 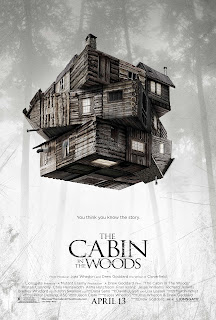 Rating: R for strong bloody horror violence and gore, language, drug use and some sexuality/nudity

Synopsis: Five college friends go to an isolated cabin for a fun weekend. You have your jock, your hot girl, your stoner, your sensitive guy and your virginal girl. It's a scenario we've all seen before; except there's more than meets the eye at this cabin. Slowly but surely we find out why horror movie characters do what they do.

Sarah: Hello again readers! Tonight I had to work, so Andrew went and saw The Cabin in the Woods by himself. He would have seen it by himself anyway since it IS a horror movie. Yeah, not a fan. So, we are going to do the old-fashioned interview review.

Well, Andrew? What did you think?

Andrew: The short but sweet answer is: The Cabin in the Woods must just be my all-time favorite movie now that I have seen it.

Editor's Note: Even if you've seen commercials, the trailer or photos from this movie, we won't be posting any pics in this review so as to try and not give too much away.

S: Yea, but why? You have seen so many horror movies. Heck, we OWN a lot of horror movies because of you! What made this one different?

A: This one was different because it was a deconstruction of the horror genre that we haven't seen since Wes Craven's Scream, but it did it in a different way that was completely enjoyable in it's own right. As a horror movie fan (it IS my favorite genre) this film had it all - your stereotypical characters, the setting (obviously), it's fair share of gore, humor, but more importantly it's an incredible homage to horror films that came before it.

S: I had heard it being compared to Scream. So that's good because it has seemed lately that the horror genre has been acking. So here is a question...this film was filmed three years ago right? So how does the acting compare to the actors' careers now?

A: Well I think that aspect may have been a little overblown simply because of all the main actors, Chris Hemsworth (Thor) is the only one who's shot into superstardom. I know Jesse Williams has his own thing going on with his role on Grey's Anatomy but Hemsworth is the big name to come from this one. They both do a fine job. You can clearly see hints of why Hemsworth was cast as Thor.

Overall the acting is actually quite good for a horror film. I know some might say otherwise, but those people need to remember that everything done in this movie is done for an exact purpose, and so if the characters SEEM too cliché it's because they're SUPPOSED to.

Richard Jenkins (Stepbrothers) and Bradley Whitford (The West Wing) are also quite important and do a fantastic job. They had me laughing quite a bit. I know you saw Jenkins when he was on Good Morning America to promote the movie, but I urge our readers to go into this film knowing as little as possible beforehand. It will maximize the enjoyment you'll get out of it.

S: Yes, I did get a little sneak preview about some of this movie's finer points, but I kind of need to do that with horror movies. get as much information as I can because if I know the scary points, then they won't freak me out as much.

How were the "jumpy" parts? Was there enough boo parts?

A: See that's the thing - the more I think about it the more I realized that it's really not THAT scary. Sure, there are scenes that are pretty tense and there's some boo scares that work organically or because it's all a part of the grand scheme of things. Overall though, it maybe could have been scarier. It all still works for me and doesn't lessen any of how I feel about this movie. It's still fantastic.

I think I really got more enjoyment in the mystery of the whole thing, how parts of the mystery were dispensed and how it all came together. The mixture of that, the humor and the nods to the horror genre made it incredibly satisfying for me.

S: I am so glad that you liked it! Yea, I will admit that it looked pretty good, even for a scary movie.

So, Andrew, what would you tell our readers about seeing this movie? Is it worth seeing on the big screen?

A: If you are a fan of the horror genre you absolutely positively have to see The Cabin in the Woods in theatres. I smiled from beginning to end, and when the third-act came around I had only one thought repeating in my head: "This is the greatest thing I've ever seen."

If you're not a fan of the horror genre then it still might behoove you to see this with a group of friends in the theatre. Or when it comes out on DVD/Blu-Ray you should gather with friends, grab some beers, turn off the lights and enjoy it that way.

Regardless, The Cabin in the Woods is an instant classic addition to the horror genre. We WILL be owning it.