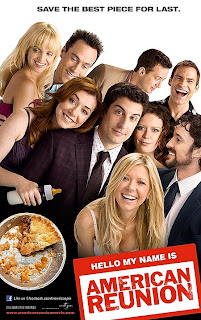 Rating: R for crude and sexual content throughout, nudity, language, brief drug use and teen drinking

Synopsis: It's been 13 years since Jim Levenstein (Biggs) and his best friends spent their senior year in high school trying to lose their virginity. Now, in their 30's and attending their high school reunion, we discover just exactly what the whole American Pie clan has been up to these last ten years as they've moved away from home and hit adulthood.

Andrew: Hello readers! This afternoon we caught a matinee showing of this week's big "new" film, American Reunion, the fourth installment in the American Pie series (the National Lampoon-esque spin-offs notwithstanding). Reunion brings back all the main characters from the original movie - Jim, Michelle, Stifler, Kevin, Vicky, Oz, Heather, Finch and, yes, Jim's Dad - but the question is: was this film necessary after 10 years since the last one?

Sarah, what are your thoughts on that question?

Sarah: Oh it was most certainly necessary! With the same amount of raunchiness and humor, the newest installment to the series showed its soft side. There was a lot of heart in this movie and that made it not only a great comedy to go see but also made it a great date-night movie. It was great to see all of the old cast come back together and how much they have all changed over the years and actually have gotten better looking!

A: I'll be honest, when I first heard that they were making this film I was skeptical because it had been so long. But the more I thought about it the more excited I became, and that excitement was well rewarded. The cast was still as funny and affable as ever, particularly Jason Biggs, Sean William Scott and Eugene Levy. It was nice to see all of the main players from the original film come into play, even if only for a small cameo.

Most importantly though, I felt that American Reunion had an excellent blend of it's style of humor and heart. You had your gross moments, you had your dirty talk, your token nudity (and some NOT so token nudity), but it also dealt with the issues that thirty-something characters SHOULD be dealing with and handled them well. It's not often that the American Pie movies make me go "awwww" but this one did on a few occasions.

S: Agreed! I said this yesterday in our preview but I will say it again - the characters in this movie have grown up with their audience. We are going through some of the same experiences now that the American Pie crew is going through now.

But let's be honest, although there were some "awww" parts to this movie, there was still all the sex, drinking and drugs that the originals have.

A: One of the few downsides I had about the movie was that it runs a little long. It dragged a bit at times, or there were some parts of certain subplots that could have been cut out altogether to make it more of a 90 minute run time instead of the 113 minutes that it is. Did you feel the same way?

S: Yeah, I would agree with that. It was a little slow and I think they could have gone into a little more of the Jim/Michelle story. But just like the last movies, they have to show some of the other character's stories too. That was really the only thing that I would say is a complaint of the movie. But I suppose it would be a criticism of all the American Pie movies, and I think they speak for themselves on how successful they have been. (The originals at least)

A: Not a bad point - Hannigan's character seems to fall off the map for a while at parts of the film and she's really supposed to be one of the main characters. Maybe it had something to do with her schedule for How I Met Your Mother, or something else, but I could have used more of her, too.

Some other positives I found for this film:

- The chemistry between Levy and Biggs as father and son. It's probably that both have gotten older, and Biggs is a better actor than he was 13 years ago, but I really enjoyed the scenes that had together. They play off each other well and could really be father and son.

- The soundtrack to the film was amazing. I need to look it up on iTunes as soon as we post this.

- Last but not least, the cameos. There are two in particular that I enjoyed VERY much and I don't want to spoil them here.

Anything that I might have missed that you liked or disliked in particular?

S: My favorite part of the movie was seeing everyone again. All the cameos and quick shots of characters really give the movie that true nostalgic feel. We will definitely own this one when it comes out on Blu-Ray.