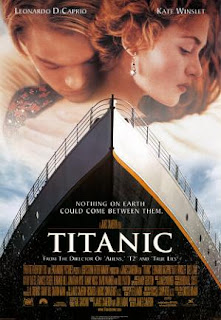 Synopsis: The tale of star-crossed lovers, the rich Rose DeWitt Bukater (Winslet) and poor Jack Dawson (DiCaprio), who meet and fall in love while on the maiden voyage of the doomed H.M.S. Titanic, told through the eyes of an older Rose 84 years after the tragic sinking.

Sarah: Good evening readers! On this Easter Sunday, Andrew and I thought that it would be a great opportunity for us to go and check out Titanic in 3D! So many people have seen this movie already. I mean, it HAS been out for 15 years so if you haven't seen it, shame on you.

But what did you think Andrew? Was it worth the afternoon?

Andrew: It was absolutely worth the afternoon (and we do mean afternoon - got to the theatre at 2:45, got out at 6:45). Titanic is without a doubt one of the greatest films in history; I mean, it did win 11 Oscars including Best Picture and Best Director.

S: The 3D blew my mind. When a movie can literally make you forget that you are in a theatre it really is amazing. I have said before in this blog that I really don't like 3D movies. I don't know if it's because it hurts my eyes or the fact that I have to wear sunglasses in a theatre but I just don't usually like them. The way that James Cameron does 3D is the exception to the rule. The pictures literally fall away from you, giving the movie depth and transport you into that fateful trip.

It has been said that Titanic is one of those movies that when you pass by it on the television, you usually stop and watch it no matter what part of the movie it is. This re-release solidifies that tradition even more. The suspense and beautiful story of the passengers on the Titanic is still as powerful today as it was 15 years ago.

A: Amen. I've seen the film numerous times but I usually come in somewhere after it starts. This is only the third time I can think of that I've seen it from start to finish and I was totally engrossed in the story and how the film looked. James Cameron absolutely deserved his Oscar for this film because it's amazing from top to bottom.

I'm a sucker for knowing how films are made and I would love to watch a behind-the-scenes documentary on Titanic because the sheer scope of the film is impressive. I'm sure most of our readers have seen the film at home or when it first came out, but I HIGHLY recommend that you see it again while it's in theatres and in 3D.

This is the best 3D I have seen for a movie since Toy Story 3 and I list it third behind only Toy Story 3 (2nd) and Cameron's Avatar (1st). The fact that this film was post-converted into 3D and looks so fantastic speaks to how well Cameron knows how to use the technology and that it wasn't just a hack-job like the 3D was for Alice in Wonderland or Clash of the Titans (so I've read).

S: Titanic is the only movie that makes me consistently cry. When the old couple is in bed together while the water swirls up around them and when the mother is tucking her daughter and son into bed with a nighttime story are two of the most touching scenes. It really just brings that feeling of complete resolution to death that I 'm sure so many felt that night. The other scene that always gets me is the VERY end when Rose goes back to the ship after she has died and everyone that went down with the ship is waiting for her. And there is Jack at the top of the stairs. *sigh* So romantic!

And this film is what shot Leo DiCaprio and Kate Winslet to stardom. Even though neither one took home the Oscar for Titanic, they have both been nominated since, and Winslet has taken home the golden statue twice. I think they can thank this movie for bringing them to the forefront of Hollywood heavyweights.

A: I'm man enough to admit that both those scenes you just mentioned also made me tear up. I attribute that to being married now (that's my story and I'm sticking to it!)

I will say, after all these years, I have a larger appreciation for this film. From the special effects to the script to the acting, I feel that it's all top-notch. For years I felt that Leo's performance wasn't very good, but something hit my today in the scene where Jack dines with Rose and the other rich people where I was quite impressed with DiCaprio's performance. It was more reminiscent of what he's done in The Aviator and Inception.

So yeah, in summary, I definitely think it was worth our Easter Sunday afternoon to go see Titanic in 3D. Think we need to go out and get this one on Blu-Ray some day soon, my dear?

S: I do think that we will have to purchase this one for the collection! It’s pretty interesting that for a movie such as this, neither of us own it yet. Especially considering we have to give it: