A Perfect Blend of Comedic Timing and Creative Spins of Popular Music: Our Review of "Pitch Perfect" (2012) 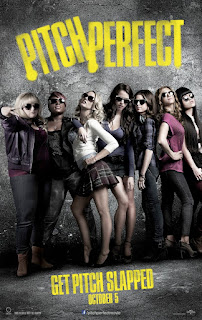 Synopsis: After a disastrous performance at the national competition the year before, Barden University's all-female competitive a cappella group, The Barden Bellas, must regroup. In doing so they manage to snag Beca (Kendrick) a loner freshman who aspires to be a music producer to join their rag-tag group, and who might just give them the fresh blood they need to beat the all-male group, The Treblemakers.

Andrew: Hello readers! Last night Sarah and I braved the Friday night middle school crowd to see a film we’ve been meaning to catch for a couple of weeks now, Pitch Perfect, starring a personal favorite of ours in Anna Kendrick (Up in the Air).

Sarah: Yeah, she’s been growing on us more lately, but we’ve always been fans of hers.

A: Very true. So we caught her latest, Pitch Perfect, which is a comedy about college a cappella groups at the fictional Barden University. Kendrick’s character, Beca, is a freshman who is only going to college to appease her father who teaches at the school, because she’d rather move to L.A. to become a music producer.

But this also stars Rebel Wilson as Fat Amy, and Wilson, who’s become more famous State-side after her small role in Bridesmaids, should become a comedic star after this. Also starring in Pitch Perfect are Anna Camp (The Help) and Brittany Snow (Hairspray) as Aubrey and Chloe, the leaders of the Barden Bellas, and some new faces too…

S: Yes! Like Skylar Astin (Hamlet 2), Ben Platt (in his first film role), and at least she’s new to me, Hana Lae Mee who plays Lilly, a character who might be the funniest in the movie.

This movie had me laughing the entire time. It was actually really, REALLY good!

A: You sound surprised!

S: I was surprised! It’s hard…with what I call the “Glee phase” where you see people singing about their troubles and it’s really cheesy at times, but this goes with a twist of the old-fashioned choir sing-off. And coming from a choir background this movie had me wanting to go back SO bad! Oh my gosh, it was just so funny, the musical performances and mash-ups were awesome, I really liked this movie.

A: You know what? I was actually really looking forward to seeing this one because I’m not afraid to admit that I like Glee, I liked musicals, I thought the concept was a good idea because these a cappella groups are actually becoming quite popular again at the college level.

I had read that this movie is based off a book written by a GQ editor who spent a lot of time following real competitive collegiate a cappella groups and that a couple of the students he wrote about helped the filmmakers with this film. So I thought that was really cool.

But it was the trailer that really sold me on some of the cool mash-ups they did, so I was excited for this and not only did it match my expectations but it exceeded them in a pleasing fashion.

A: True, but there is a LOT of music.

S: There’s a lot of music, but it’s totally relevant.

A: Yes. So I was pleasantly surprised by how much I enjoyed this movie. Anna Kendrick, like we mentioned, we’re big fans of hers and I didn’t know she could sing.

S: Mad props to her, for sure. I don’t know how much of the singing she does in the film was enhanced in post-production but she definitely sounded good. And compared to what Kendrick has been doing lately, this wasn’t that heavy of a role. It was light and it looked fun to film. First and foremost it was a comedy and I loved that.

A: Well yeah, in Bridesmaids she was just supposed to be an off-beat, weird character, but here she was allowed to shine…

A: Yeah, I thought Pitch Perfect was hilarious and I said this to you while we were leaving the theatre – I was smiling almost the entire movie because it’s A.) laugh-out-loud funny, or B.) what they did musical was really neat because they did mash-ups, they did regular renditions of popular songs, it was all just really inventive and creative…

S: And it was all a cappella! That’s what’s cool is that other than the beats Beca likes to make on her laptop and that one song from The Breakfast Club…

S: Yeah, other than those things it was ALL a cappella was is always impressive.

A: Well let’s name some of the cool songs they did real quick. Like I personally loved what The Treblemakers, the all-male group who rival the Barden Bellas, did for their renditions of Flo Rida’s “Right Round” and Cee Lo Green’s “Bright Lights Bigger City.” And by the way, can I say how great that name is? The Treblemakers? Reminds me of

S: Those were definitely awesome. I can’t really come up with a favorite because they were all awesome. It was just a fun movie.

I don’t really have anything negative to say about Pitch Perfect because it doesn’t really lend itself to being a movie you NEED to pick apart.

A: Yeah, I would say from our perspective because we honestly enjoy this sort of entertainment. We both have some musical background – you were in choir and did musicals, I played the clarinet all through middle and high school (yes, I was a band nerd and I loved it, so what? Wanna fight about it?). We love music.

So if you’re not the sort of person who likes this kind of thing, like if you hate Glee...

S: This might not be the movie for you.

S: They have some great one-liners.

I would love to know how much of this movie was ad-libbed. I felt like Lilly probably got to ad-lib a lot of her one-liners and how much of what Elizabeth Banks and John Michael Higgins said was ad-libbed because it felt so natural, like they were joking around between actual friends.

A: And Rebel Wilson, too. They show an outtake during the credits and you can tell the other actors weren’t expecting the line she said. Hana Lae Mee as Lilly is hilarious. She has the BEST one-liners.

S: The best! She looks to be an up-and-coming comedienne, and along with her, this looks to be a nice breakout role for a lot of young, funny actors in Hollywood.

A: As far as Lilly, what was really funny about her is she whispers pretty much everything, just speaks really softly so you almost can’t hear what she says. And the humor is that she says these outlandish things so softly that we were both like, “What???” Then it dawns on you what she said…

S: And it got to the point where the whole audience went silent when she was on the screen so you could hear what she was going to say next.

A: And even Kendrick, I’ve always found her kind of funny but just the dry delivery of what she says is perfect. Altogether the script and the comedic timing in those regards were top-notch.

S: You had your known actors like Kendrick, Snow and Banks, but you also had a lot of lesser-known faces and they were all great!

A: And the newer face who impressed me the most was Skylar Astin as Jesse, a new member of the Treblemakers who becomes a love interest for Kendrick’s Beca. I’ve seen Hamlet 2 and even though he’s one of the stars I honestly don’t remember him from it, and you know what? Quite honestly I think he looks like a cuter, younger version of Dane Cook.

A: Like he could be Dane Cook’s little brother.

S: Definitely. But he’s got some singing chops!

A: He does! He has great comedic timing, he looks incredibly earnest and I’m glad he was one of the main guys because I was very impressed.

S: I was impressed to, not just with him but by the entire cast. They all seemed to have a lot of fun making this movie.

There doesn’t seem to be a main antagonist in the film, which is a little unusual for a movie, because the only real conflict was between Beca’s new ways and Camp’s Aubrey, who screwed up big time when they were at nationals once and really feels the need to not change anything and play it safe so they can just make it back.

A: The conflict was realistic and kind of within the group and really just from the Bellas’ competition. I liked that.

S: So did I. So final thoughts on Pitch Perfect?

A: I’m going to mark it down just a little bit for the fact that a sub-plot about Beca and her relationship with her father wasn’t too impressive, and they seemed to set up the possibility that the station manager of the student radio station Beca and Jesse both intern at could have been another love interest for her, but that never goes anywhere, and overall the movie is a bit predictable. But I enjoyed the hell out of it, so that’s all cool with me.

I loved Pitch Perfect, I definitely think we should own it one day and it’s a must-see in theatres if you like this kind of thing.

S: I couldn’t agree with you more!

FINAL VERDICT: If you love Glee this is a must-see, otherwise it’s a fine way to kill a weekend afternoon!