Bay's Latest A Nice Reminder That He Can Still Makes Good Movies: Our Review of "Pain & Gain" (2013) 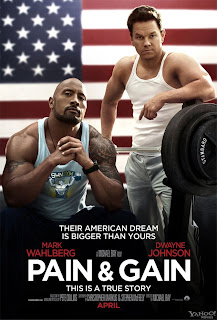 Directed By: Michael Bay (The Rock)

Synopsis: Daniel Lugo (Wahlberg) is a personal trainer at a fitness club, unhappy with his lot in life when he becomes obsessed with a "get rich" guru's three-step plan. Inspired by the guru, he enlists two co-workers - Paul (Johnson), an ex-con and drug addict, and Adrian (Mackie), who's impotent because of steroid use - to help kidnap and extort a rich member of their gym (Shalhoub).

Andrew: Hello readers! Last night Sarah and I were finally able to find some time to catch a flick at the local movie theatre, so we caught a late showing of Michael Bay’s latest film, Pain & Gain, starring Mark Wahlberg, Anthony Mackie and Dwayne Johnson as a trio of body-builders who conspire to kidnap and extort a rich member of their fitness club in order to “live the American Dream.” And then things go haywire, and it’s based on a true story, no less.

We had seen the trailers for this one numerous times over the past few months, and it was certainly one that caught our attention. At least I thought it was pretty funny each time we saw it. What did you think about Pain & Gain before we went into the theatre, though, Sarah?

Sarah: The trailers made us laugh but it wasn’t one that I was dying to see. I was interested in seeing it because of  Wahlberg and The Rock. Going into it – I don’t know if I just wasn’t paying much attention to the trailers or what – but I didn’t realize that Michael Bay directed it! Maybe it’s because it didn’t look like anything I had seen of Bay’s before?

A: I find it interesting that you say that because the first thing I want to say about Pain & Gain is A.) I liked it, but didn’t love it…

A: B.) What I liked about it is that it’s old-school Michael Bay. It’s more in line with Bad Boys and The Rock.

S: Oh I didn’t know Bay did those! And I learned something.

A: Yup, and Pain & Gain reminded me a lot of those films, as well as some of his more recent ones, because of his use of the slow-motion and Bay’s favorite camera shot – the low-angle beauty shot of his main characters. Panning around like you’ve seen time and time again in Transformers and the Bad Boys movies. That is a classic Michael Bay shot.

And this movie is funny, much like Bad Boys and his other films can be. So I just thought this was quintessential Michael Bay, and I think it’s what he should be making instead of those…

A: Exactly. The first Transformers was good. The others? Not so much. What did you think of Pain & Gain?

S: I liked it, but like you I didn’t love it. Turns out I have seen Bad Boys, I have seen The Rock, but I guess I just couldn’t get the relation between those and this one.

Honestly it was the story in this film that I was most interested in. It’s so different from anything I’ve seen from Michael Bay. It’s also pretty different for all the actors involved. It was a Mark Wahlberg that I hadn’t really seen before; like a dark side of him. So it was a different kind of character for him and I liked that.

It was definitely a different kind of character for Dwayne Johnson, and Mackie…other than The Hurt Locker I haven’t been impressed with him, or at least he hasn’t made much of an impression on me, but he was good. He was funny. It was just a departure from these guys’ normal roles, so I found that interesting.

A: Let’s touch on the fact that this is different. It’s different for Wahlberg because he’s showing his comedic chops again, like he did in Ted, and he kind of flashed in The Departed, so we’ve seen it here or there.

Mackie, you know, we’ve seen in The Hurt Locker and The Adjustment Bureau, things like that, but this was sort of more of a straight comedic performance for him. Mackie was really the comedic relief, along with The Rock. And for what it’s worth, I thought Mackie and Dwayne Johnson nailed their parts. They play these dumb…

S: Meatheads, all three of them play really idiotic characters. And the crazy thing is – and they mention this a few times in the movie – these events actually happened! You’re watching this and you’re thinking, “There’s no way this is based on a true story,” and then they make a point about three-quarters of the way through the movie that, “This is still based on a true story…”

A: You mean when things were getting out of a hand and escalating…

S: Yes! And things escalate in such a ridiculous way…

A: Something that’s both neat and scary is that the actual guys these characters are based on are still in prison! Well one of them isn’t anymore, but two of them are still on death row!

A: They’re not good people. They’re just the main characters. And we kind of laugh with them, and kind of cheer for them a little bit, but then when things escalate the allegiances in the film sort of shift. I know I at least kind of started rooting for Tony Shalhoub’s character, Victor Kershaw. And you know, Shalhoub is in the movie so much that he’s pretty much one of the stars.

So things sort of shift and I started rooting for Kershaw, because he’s been wronged by these guys, he’s been tortured by these guys and lost his life pretty much, and he just wants his stuff back, so he hires a private investigator played by Ed Harris.

S: I thought Ed Harris did a great job of playing Ed Harris…

S: But I liked his addition to the story. I felt that it was a good casting choice.

A: Well he’s a Michael Bay guy, he played the villain in The Rock.

S: Anyways, I liked his addition and I thought his character’s wife said some pretty poignant things at appropriate times. I thought the writing was pretty strong here most of the time. I mean, they had a lot of material to work from, but I thought the dialogue was pretty spot on and it was just a good script.

A: I did like the dialogue, which reminds me of why I thought this movie was so funny. A lot of the humor is derived from the situations the characters get themselves into, but a lot of the humor also comes from a nice medium of where these meatheads are coming from.

They’re very sincere, particularly Mackie’s Adrian and Johnson’s Paul, and the actors’ delivery of their lines made that sincerity very funny to me. Like Paul’s introductory scene where…

S: Adrian keeps peppering him with questions on how he gets so big, yeah.

A: And then later Paul, who starts off as a recovering drug addict, falls off the wagon and gets super hyped up, which I found hilarious because of Johnson’s performance. Be honest with me here: should Johnson get any award love for his job here?

A: I ask because he’s not just playing The Rock. He’s actually acting here, and he was funny!

S: True, it’s not quite like Snitch where he was trying to act serious, and not quite like G.I. Joe: Retaliation where he’s pretty much The Rock, he was definitely acting here. At first I couldn’t tell if he was or not, but it becomes very apparent later on that he is.

A: His turn here reminded me a lot of Jack Black and Robert Downey, Jr.’s performances in Tropic Thunder. Like, no one really thought RDJ could do that, and Black was just funny as a drug addicted actor, I don’t know.

S: I don’t think The Rock is award-worthy, but I do think this movie has gotten a bad wrap from people that both have and haven’t seen it. People that haven’t seen it might be writing it off because it’s a Michael Bay movie. And the people that saw it and didn’t like it maybe didn’t get the humor? I’m not sure.

S: It’s pretty impressive for the actors involved here. Even Rebel Wilson, who’s underused, turns in a fine job. I really like the supporting actors, too, like the guy who plays the doctor (Editor’s note:  She means Peter Stormare) and Rob Corddry, who plays Wahlberg’s boss. Bay casted an eclectic group together here and it all worked.

A: Agreed. If there’s one main thing I’m going to knock this movie down for it’s that it’s too long. It’s bloated, and the finale is kind of weak. The fun in the movie is all the build-up to the climax, and how things spiral out of control…

S: And then things sort of flattened out a bit. This movie is also pretty violent! There is some extreme violence here, which makes it pretty dark.

A: Let’s wrap it up. Final thoughts on Pain & Gain?

S: Is this one you need to see in theatres? No, not really…

A: But I would say it’s worth checking out when it comes out on DVD if only to see Dwayne Johnson’s performance.

S: Mhmm. It was different, it was funny, and the dude is just HUGE. He is a mountain of a man.

A: It’s been a relatively strong year for Dwayne. He had Snitch, which we liked. He was good in G.I. Joe: Retaliation, and now he has this. So good on him.

Again, I liked this movie. Actually, I really liked it. To the point where I don’t think we’ll own it someday, but I’d personally rank it above all his Transformers movies, Armageddon and Pearl Harbor, and probably right between the Bad Boys movies, with The Rock on top, of course.