Five Reasons Why... "Man of Steel" Will Be The Highest-Grossing Movie of 2013! 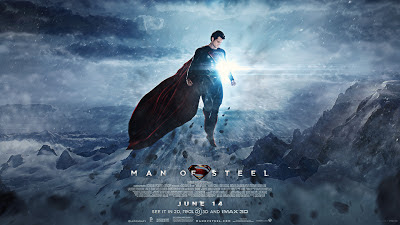 Andrew: Hello readers! Zack Snyder's Man of Steel hits theatres nationwide tomorrow, and it's undoubtedly one of the most anticipated films not only of this summer, but of the year. And I, for one, believe that it will not only be the highest-grossing movie of the summer but of the year as well. When you think about it, that's a pretty bold claim, because Marvel's Iron Man 3 has already grossed a whopping $1,197,907,000 worldwide (as June 13th, 2013), making it the fifth-highest grossing movie of all-time (not adjusted for inflation.) Think about that! It's only been out for five weeks and it's already made that much cash, including an astounding $395,607,000 domestically. (Numbers courtesy of Box Office Mojo)

So yeah, Superman has quite the hill to climb to catch Tony Stark's lofty perch at the box office, but I'm just crazy enough to believe that he'll be able to do it. So without further ado, here are Five Reasons Why... I Think "Man of Steel" Will Be The Highest-Grossing Movie of 2013.

Nolan and Goyer is a bonafide tande, as we’ve seen with their collaboration on the Dark Knight Trilogy. No, Nolan isn’t directing the film this time, but it’s clear his fingerprints are all over this film despite insider claims that he was never really on or near the set during filming. His buddy Goyer wrote the screenplay based off a story that they both came up with, and while Zack Snyder is the director, it’s probably a safe assumption that Nolan and/or Goyer were right there with him along the entire creative process, filming and post-production in some way, shape or form. Hell, if you watch any of the trailers or TV spots for Man of Steel and they didn’t say Nolan only produced and didn’t direct, you probably wouldn’t notice the difference. When it comes to getting butts in the theatre, it doesn't hurt when you have the minds behind a trilogy that made over $2.46 billion at the box office.

Have you seen these things? Do me a favor, even if you’ve seen these trailers before, watch them again one more time, then we’ll come back to this.

Now that we’ve watched those again, tell me that at least one of those trailers didn’t give you chills. Tell me that the scenes with Kevin Costner didn’t hit you in the heart somehow (“What was I supposed to do? Just let ‘em die?” “……maybe.”) I mean c’mon! And that music??? I’m not sure about the first one I embedded here, but the second one (trailer #3 technically) uses the score Hans Zimmer created for the film, particularly a track called "What Will You Do When You're Not Saving The World?" from the soundtrack, which incidentally I've been listening to non-stop for the last three days. (You can listen to it in its entirety HERE if you so choose.)

Anyways, these trailers have created an intense amount of buzz on Twitter-sphere and elsewhere online. These two trailers on Warner Bros. official YouTube page alone have garnered almost 60 million page views. I think that bodes well for opening weekend, at a minimum.

3.) A New Take on an Iconic Villain

One of the biggest parts of Warner Bros.' marketing strategy has been to put the film's villain front and center (one of Paramount's biggest missteps with Star Trek Into Darkness). and that villain is General Zod, as played by Michael Shannon.

While Shannon has always been a strong character actor in movies like 8 Mile, his star has been rising ever since his Academy Award nominated turn in Revolutionary Road, particularly with his performance in HBO’s Boardwalk Empire and another critically acclaimed turn in 2011’s Take Shelter. Not only does he have true acting chops, but he’s been gaining traction in younger demographics - for instance, this awesome Funny or Die video where he reads the infamous Sorority Girl Letter.

Playing General Zod - arguably Superman’s toughest antagonist (note that I don’t say “biggest” because that’s obviously Lex Luthor) because he, too, is a Krytopnian like Superman is, and therefore has all the same powers along with military tactical knowledge – gives Shannon the chance to showcase his particular style of acting.

Zod was famously portrayed by Terrence Stamp in Superman II, so while some Superman fans might be hesitant to see a new portrayal of him, he’s also not so famous as Lex Luthor that the general movie-going audience will be tired of seeing him again (like some were with Kevin Spacey’s Luthor in Superman Returns). That said, Zod is also know well-enough with superhero fans that I’d bet a large number of them are interested to see Shannon’s take on the character. Is it possible he does better in the role than Stamp, like Heath Ledger overshadows Jack Nicholson’s Joker now? I'm going to say he does, and he'll be a big reason why many viewers will want to return to the theatre to watch this film again.

4.) I Believe It’ll Be a Four-Quadrant Movie

What does “four-quadrant movie” mean? As Wikipedia puts it, in the film industry a “four-quadrant movie” is a film that appeals to all four of the major demographics (or “quadrants”) that span the movie-going audience: both male and female, over and under the age of 25. And one of the best predictors of how a film’s box office will hold up is seeing at least three of those four quadrants seeking out the movie even weeks after the film has been released.

It’s my belief that Man of Steel will easily cover all four of those quadrants, and for these reasons:

When you have a four-quadrant movie like I believe Man of Steel will be, that means you'll have moms, dads, brothers, sisters, aunts, uncles, grandpas, grandmas and your next door neighbor forking over their hard-earned money to see a film that'll be getting great word of mouth.

It was a word I repeated plenty of times in the Four-Quadrant section, and that’s because it’s probably the biggest thing Man of Steel will have going for it when it comes to its chances at topping Iron Man 3 as the highest-grossing film of 2013.

It was also no secret that one of the main reasons Superman Returns was such a flop was because of the distinct lack of action in a freaking SUPERMAN movie. As we saw in the trailers above, from Nolan’s Dark Knight Trilogy plus Inception, along with Snyder’s own resume, there looks like there will be an abundance of action.

But what does being action-heavy mean for Man of Steel? It means repeat customers. Why did movies like The Dark Knight, Avatar, The Avengers and Iron Man 3 take the box office by storm? Because people will buy tickets to see the same movie in the theatre if there’s some damn good action to go along with other factors like strong characters, humor, breath-taking cinematography, etc. This holds especially true in foreign markets, where nothing translates from English to other languages quite like action. (For example, Iron Man 3 made a whopping 67% of its worldwide box office from foreign markets.)

From the sounds of it, the last 40 minutes or so of Man of Steel is going to be an action-packed brawl between Superman and General Zod in Metropolis that will rival, if not surpass, the battle of New York City in The Avengers. How movie-goers react to the action in Man of Steel and whether or not they’ll keep coming back to see it on the big screen again and again will be the biggest key at topping Iron Man 3.

So when all is said and done, with all of the above factors and probably many more that I couldn't fit into our Five Reasons Why... format, I truly believe Man of Steel will be the box office king when 2013 concludes. And just so I'm clear about my claim here, when I say I think Man of Steel will be the highest-grossing film of 2013, I mean domestically. I peg Snyder's film to end somewhere just below $500,000,000 for the year here in America, while struggling a bit to catch Iron Man 3 in the foreign market because of Superman being more American-oriented. Only time will tell, but if Supes gets anywhere near Tony Stark's $174 million opening weekend, we'll have a good idea if I'm right or wrong!