We Would Love to Spend the Apocalypse With These Guys: Our Review of "This Is The End" (2013) 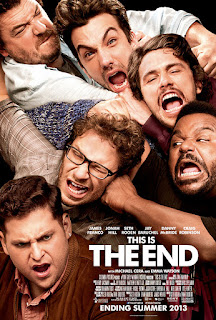 Rating: R for crude and sexual content throughout, brief graphic nudity, pervasive language, drug use and some violence

Synopsis: Jay Baruchel (himself) visits his BFF Seth Rogen (himself) in L.A. for the weekend. Although Jay doesn't quite get along with Seth's newer Hollywood friends, he joins him to a party at James Franco's house, when suddenly the world starts to go to Hell and leaves Jay, Seth, James Franco, Jonah Hill, Danny McBride and Craig Robinson alive to fend for themselves while the Apocalypse is going on outside.

Andrew: Hello readers! A couple of weeks ago Sarah and I were able to catch an advanced screening of This Is The End, the apocalyptic comedy starring Seth Rogan, James Franco, Jay Baruchel, Jonah Hill, Danny McBride and Craig Robinson…

Sarah: Plus a whole host of their friends and other famous people in various cameos.

A: It’s written and directed by Rogen and his regular writing co-hort, Evan Goldberg. Together they have also written Superbad and The Pineapple Express, but this is their first time directing a film. This Is The End is based on the short-film Jay and Seth Versus the Apocalypse that this duo co-wrote and that Rogen and Baruchel starred in, with the simple premise being that all the main actors involved are playing exaggerated versions of themselves who all get together at James Franco’s house for a party when the apocalypse starts to go down.

S: They’re definitely playing exaggerated, fictionalized versions of themselves, which I enjoyed. Yes, for the most part it’s just a bunch of guys messing around, but they’re still legitimately trying to tell a story, with the actors actually playing characters – they just happen to be parodies of themselves, essentially.

A: So what did you think of This Is The End?

S: I thought this was so funny! I thought it was a fun, ridiculous, over-the-top apocalyptic movie with a bunch of actors that I really think are funny, plus a couple that I don’t, but you bring them all together and it’s magic!

A: You’re absolutely right that this movie is hilarious. We laughed out loud so many times. It’s vulgar, it’s crude…

A: It’s inappropriate, but there’s also just a ton of genuinely funny bits that are derived from the friendships between these actors, making references to their respective bodies of work, all kinds of meta-jokes, and then from the apocalypse in and of itself.

S: Yeah, they did a pretty good job with the special effects in this movie. For being a relatively low-budget film…

S: Point being that it didn’t look low-budget for the most part. A couple of times there was some computer-generation that was kinda obvious, but pretty much everything else was really well done! I thought the actors performed with the computer-generated things pretty well.

I thoroughly enjoyed all of the cameos in this film. I was just amazed at all of the people in Hollywood that they got to be in their movie. I mean, some big name stars show up!

A: With some legitimately funny turns, too. Michael Cera basically plays a hyper-realistic version of himself, much like Neil Patrick Harris does in the Harold & Kumar movies. And it. Is. A. Riot.

A: And there are so many others that I don’t want to talk about too much for fear of spoiling them. So what I want to talk about real quick is, we saw the trailer for this film a million times, but it turns out the trailers don’t really give a whole lot away! The trailers pretty much consistent of stuff that’s only in the first 15 or 20 minutes of the movie. The rest of it is a complete surprise and it was so entertaining because of that. There’s a plot here, and different things happen to these characters in an escalation of things until an amazing pay-off at the end.

S: Oh, there are a couple amazing pay-offs at the end. Seriously, we really don’t want to spoil anything about this movie, so just trust us when we say the pay-off at the end is fantastic.

A: I mean, there are some cameos that they show in the trailer…

S: So ones that we do know of, like Michael Cera and Rihanna…

A: But there are a ton of others we won’t spoil here because they’re some of the best cameos I can remember maybe since Tom Cruise in Tropic Thunder. When this particular cameo happened, it brought the house down.

If there are any negatives, it might be just that the plot isn’t the strongest plot in movie history…

S: It’s not a strong plot by any means, but it’s there and it moves the story along, plus it’s funny. There's also a fair amount of heart in this movie by focusing on the friendship between Jay and Seth and whether they're slowly drifting apart or not. So it was nice that they balanced that in with the end of the world stuff.

A: But the great thing is they play to the tropes of other apocalypse movies, monster movies, horror movies, etc., which sadly some of the commercials they’ve been showing on TV have been giving away some of the better bits, so hopefully you haven’t been seeing them. I loved that they did bring a bit of horror to the proceedings, so that it's not just all laughs and love-fests between Jay and Seth or Seth and Franco.

S: And it totally shows. There are a lot of scenes where it seems like they’re just being spontaneous and improvising, and it works because they genuinely have good chemistry with each other.

S: It’s fun because they make fun of themselves and each other as actors and I thought that was refreshing. It’s just a good time at the movies even though it’s a little dark and twisted at times. But it’s totally worth checking out, especially after we’ve had two post-apocalyptic movies come out this year in Oblivion and After Earth that took themselves so seriously. It’s nice to see a film like this where it’s a light-hearted affair and you can just have a fun time at the movie theatre.

A: The bottom line is, if you like these actors, if you like Seth Rogen and James Franco and so on, you’re going to love this movie. Even if you aren’t fans of those actors, it’s still one of the funniest movies of the year and it’s going to be a huge hit.

S: Definitely worth seeing in theatres.

A: I really can’t think of anything bad to say about it.

S: I mean, it’s ridiculous and over-the-top, plus there’s the sometimes not-so-great CGI, and the plot is a tad thin. But again, don’t go in expecting it to be this deep, meaningful movie. It’s just a fun piece of cinema.

A: It meanders at times, but it’s so funny that it makes up for it. Those times when it seems like they’re riffing on stuff can stretch a little thin, but everything else makes up for it because you’re laughing so much elsewhere.

S: Honestly, my favorite part of this movie is the music. Pay attention to the music, because they use music to hilarious effect, too. It’s so well-picked.

Definitely check out This Is The End. It had us laughing out loud and was just a fun, summer movie. When you take it for what it is, there’s nothing bad about it.