Fox Strikes Gold with Their Bullock/McCarthy Buddy-Cop Comedy: Our Review of "The Heat" (2013) 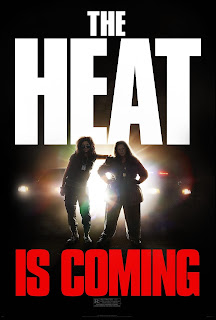 Synopsis: Special Agent Sarah Ashburn (Bullock) has high aspirations in the FBI and wants to impress her boss, so she reluctantly takes a drug ring case in Boston that forces her to team up with a brash police detective named Shannon Mullins (McCarthy). With styles and personalities that clash, they struggle to find a way to work with each other in bringing down the drug kingpin...and maybe even become friends in the process.

Andrew: Hello readers! Today sees the release of one of the bigger name comedies of the year, The Heat, starring Sandra Bullock (The Blind Side) and Melissa McCarthy (Identity Thief) as an FBI agent and a Boston police detective forced to work together to bring down a drug ring. It’s a R-rated comedy brought to us by Paul Feig, director of Bridesmaids, the film that McCarthy was a supporting role in and was her breakout role.

Sarah and I were fortunate enough to see a screening of The Heat weeks ago, and
this was a movie that was originally slated to come out last April but it was pushed back to its current release date at the end of June by 20th Century Fox. I originally wasn’t quite sure why they pushed it back, but now after seeing it, I think we can assume it’s because they knew what kind of film they had and wanted to get big summer dollars

Sarah: I would agree with you on that one. There would really be no other reason I could see other than to get it into the summer blockbuster series.

Going into this film…Sandra Bullock, Melissa McCarthy, done by the same guy who did Bridesmaids…what did you feel Feig followed up his 2011 hit with this new buddy-cop flick?


A: I actually would like to hear your thoughts on that first, since you weren’t as big a fan of Bridesmaids as I was.

S: I wasn’t! I didn’t understand what all the hype was about, it got built up and built up, then we saw it and yeah, it was funny, but it didn’t tickle my funny bone as much as Wedding Crashers did, I’ll say that.

But this one I thoroughly enjoyed! It was so funny! Great chemistry between the two leads – and I think that’s something this film really had going for it, I really like Sandra Bullock so much better than Kristin Wiig, and I’ve always liked Melissa McCarthy; I think she is what made Bridesmiads funny. She stood out amongst all the other comediennes, and she did again here except she played off of Sandra Bullock really well!

I really enjoyed this one, I thought it was incredibly funny. What did you think?

A: I’m in complete agreement with you. This was a genuine laugh-out-loud comedy. Time and time again I was practically rolling in the aisle, and a lot of the things I found funniest were not in the trailer.

S: I’m glad you mentioned that because the thing is, yeah, it seems like they give away a lot of the funny parts in the trailer but then you watch the movie and you realize that a lot of the clips in the trailer aren’t the actual takes they use in the movie. They don’t use the same exact lines in some cases. It’s the same scenario but different takes are in the actual movie and that was a pleasant surprise.

A: Not only that, but the sheer volume of jokes or witty one-liners or quick remarks by Melissa McCarthy is staggering. There are a lot of jokes or funny things thrown at the audience and a lot of it sticks! So it’s not like a movie like The Dictator where there are a ton of jokes but most of them fall dead. Here, they’re almost all successful.

McCarthy is clearly the star of this show, though. I love Bullock and I thought she was great here, she was channeling her Miss Congeniality days…

S: She plays a good FBI agent, doesn’t she?

A: She does. But McCarthy was great as the loud-mouthed and vulgar Bostonian… with some heart, too. And I thought that was important, that this movie has some heart. It’s a good buddy-cop comedy.

S: It really is a buddy-cop film!

A: A female buddy-cop movie…

S: That’s exactly what it is. That’s the best way to describe this movie. The whole plot about the drug ring was kind of meh, it’s your run-of-the-mill cop story…

A: I will say I kind of figured out who the big bad guy was early on…

S: You did? I didn’t. I kind of figured it could have gone one of two ways and I chose wrong.

A: It’s their differences, your classic yin and yang, oil and water relationship, but it works so well. These two actresses are so funny…

S: So funny. One is an in-your-face funny and the other is a dry kind of funny.

A: Bullock is able to be very subtle, she’s great. I also thought the supporting cast was great. I liked Damien Bichir was Bullock’s boss. Marlon Wayans didn’t have a whole lot to do as a fellow FBI agent, but I liked him. The various bad guys were funny in their own rights, and I loved seeing a lot of supporting actors who were on The Office such as Andy Buckley, who played David Wallace, in a brief cameo; Zach Woods, who played Gabe; and that one guy in the dance club?

A: Yeah! (both laugh) And those actors from The Office were in this because Feig was an executive producer and director for the show. So, there were just a lot of familiar and funny faces that put it over the top for me.

S: They really did. This entire movie is very funny.

A: But it’s really Bullock and McCarthy’s show. I think Fox made the right move, this movie is going to make a lot of money.

S: Mhmm. Out of the three comedies we’ve seen so far this summer, I think it’ll be a toss-up between this one and This Is The End as to which one will ultimately do better and be remembered as funnier. This one is actually  a little more similar to The Internship because of the buddy humor. So I think it will really kind of depend on which kind of comedy you prefer.

Obviously The Heat is more on the vulgar side of things, or at least it has a lot of language, plus the occasional bout of violence; whereas you could probably take kids to see The Internship. This one is more like This Is The End in that it’s a hilarious R-rated comedy.

A: Another part of the casting I forgot to mention is how much I loved the casting of Mullin’s family. Off the top of my head you have Bill Burr as Mullin’s older brother; you have Nathan Corddry, Bill Corddry’s little brother, as another brother…

S: He’s Rob Corrdry’s brother!? I never knew that! He was hilarious when he kept saying “nark” so Ashburn could understand what he was saying. (laughs)

A: Her third brother was Joey McIntyre from New Kids on the Block, and then the best Jane Curtis as her mom. She doesn’t have a lot of lines…

S: I think she might have two lines in the whole movie, but they’re great!

A: The first time you see her on-screen was one of my favorite parts of the whole movie. Oh, I almost forgot about Michael Rapaport as her brother Jason, who actually has the biggest role of all her siblings. I thought he and McCarthy had a pretty good rapport. She what I did there?

S: (shakes her head) Who played the dad? He looked really familiar.

S: I couldn’t place him.

A: Anyways…there were a lot of jokes about Boston in this movie.

S: Tons of them. And I think maybe us living out on the East Coast I think that hit home a bit more for the audience we saw it with.

A: A lot of the jokes about Boston accents were a little derivative…

S: But they were so funny! Boston accent jokes never get old for me.

A: So overall, what did you think of The Heat?

S: I thoroughly enjoyed it and think it’s a laugh-out-loud, have-fun-at-the-movies kind of comedy. I think it’s one you definitely need to see in theatres.

Photo Courtesy: filmofilia.com
Posted by Two Tickets For... at 1:45 PM