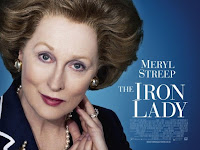 
Synopsis: The rise and fall of Great Britain's longest tenured and only female Prime Minister, Margaret Thatcher (Streep), is told through flashbacks and the eyes of an older Thatcher, who is suffering from advancing dementia.

REVIEW
Sarah: Anyone who knows me knows that I have an undying love for the . If I believed in “other lives” I would say that I was some sort of British noblewoman in a past life. So needless to say, I was excited to see “The Iron Lady,” starring Meryl Streep. We had heard mixed reviews, but with Streep being nominated for an Academy Award for her role as former British Prime Minister Margaret Thatcher, we felt that we owed it to our readers to see this movie. And we are glad we did. Meryl Streep was amazing in it and deserves all the praise for her role, and probably should win the award. But, if you were looking for another “The King’s Speech” or even “The Queen,” you won’t find it in “The Iron Lady.” While Streep had an amazing performance, the story was seriously lacking.

What did you think Andrew?

Andrew: Well, I honestly think you pretty much said it all about the most important aspects of the film. Streep certainly knocks it out of the park with her performance, as she truly does embody Thatcher. A lot of that had to do with the fantastic makeup work done on her (leaps and bounds better than the old-age makeup done in the disappointing “J. Edgar”), as well as her prosthetic teeth, but she absolutely nailed the accent and she certainly looks as close to the real Thatcher as anyone could have.

S: The feel of the movie is a little strange though. It was like looking into a biography book about Thatcher but told in flashbacks. You go from a very elderly Thatcher with advancing dementia to a young determined woman who dreamed of a stronger , which she intended to do something about. But the flow is rough and there is little point to the film other than a biography of this historic figure. While it is interesting that Thatcher is still living while this biography is in theatres, I believe it is a testament to her record-breaking time in office.

A: Yeah, as we watched the movie the thing that kept coming back to me is that it was so disjointed. It skipped all over the place and I think it really had it’s strongest point in the first half when you first saw Streep playing the older Thatcher and how lost she is in today’s world, and then the younger version of Thatcher played by Alexandra Roach, as we see her gain political aspirations and achieve them. It’s when it got to the 1980s part of the film that it really felt more all over the place.

And who knows, maybe that was the intent of the filmmaker? If the idea was to have us feel the same confusion that the older Thatcher did, then it succeeded quite well. I mean, one of the main aspects of the film is that Thatcher seems to be haunted by the memory of her dead husband (played by Jim Broadbent) in what seems to be hallucinations, and the way in which it’s portrayed can be quite confusing, as it was supposed to be for Streep’s character.

S: That is a good point to say that it might have been filmed to make us see life through the eyes of Thatcher. Interesting. British movies tend to be an acquired taste, and while they will always hold a special place in my heart, I was a little disappointed in this one. But, I am sure that it will end up on our shelves…one day…when it’s cheap.

As far as our actual ranking of it: Netflix it!

Ok…now last month we said that once a month we would put in a favorite movie memory and tonight will be February’s installment of that.

Sarah: One of my favorite movie memories was when we went and saw “Robin Hood” starring Russell Crowe (seriously bad, was expecting another ‘Gladiator’ and did not receive). But it was not the movie that I remembered, but what Andrew and I snuck into the theatre, Max and Emily’s Sandwiches! Anyone from knows a) how tough it is to stick those bags even in a big purse and b) how ridiculously delicious those sandwiches are. It made the movie all that much better!

Andrew: That WAS a good movie memory. Good one, hun. For this month the one that pops into my head was the time you visited me in in the summer of 2010 and we saw “Inception” in an IMAX theatre. We got these seats that we perfectly in the middle of the theatre. The stadium seating leveled out in the middle so handicapped seats could be put there, and there were four seats right in the middle with the two end seats blocked off for people who were with anyone in a wheelchair. We grabbed the two middle ones, no one sat next to us, and we proceeded to have our minds blown to the back of the auditorium. ‘Twas awesome.
Posted by Andrew Keck at 11:15 AM