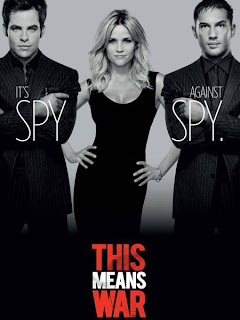 Rated: PG-13 for some sexual content including references, some violence and action, and for language

Andrew: Hello readers! This morning Sarah and I went to a morning viewing of the new Reese Witherspoon/Tom Hardy/Chris Pine film “This Means War.” We previewed it on Thursday and it topped our list of new releases we’d see, as we’re fans of all three main actors and the kind of film it is. So, Sarah, did “This Means War” live up to what we thought it would be?

Sarah: I think it did! It was a lot of fun and I actually laughed throughout most of it! I was concerned with this one. When the trailers for “This Means War” came out, I thought, “Oh no, they have given away all the good parts!” I was pleasantly surprised that they didn’t. What did you think?

A:  I with ya on this one. I personally didn’t have really high expectations for “This Means War” and so the amount of times I outright laughed out loud was a pleasant surprise. I think a lot of that had to do primarily with the chemistry between Chris Pine and Tom Hardy – they’re delivery of funny lines was spot on. 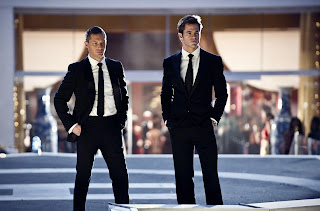 S: Once again, it was a movie that didn’t try to be the next great romance, or best action film. It was just an all around funny date movie. The characters interacted really well together, and even Reese Witherspoon was good, considering her last movie, “How Do You Know?” was a complete bust.

A: Reese was pretty funny in her own right, but I do think her character was pretty flat. She was a bit flaky and at times I actually didn’t like her, but she was solid. I thought the film did a better job of fleshing out Tuck and FDR, and they certainly were the two MAIN characters, in my opinion, so they should have been the more rounded ones.

Was there anything about the film that you didn’t like, or that you thought was subpar?

A: That’s not a bad idea! Cuz the movie starts with Tuck and FDR on a mission, which introduces us to them and the villain, and that was one of the best parts of the film I think. So the idea of seeing them in action more is an appealing one.

On that note, one of the strengths of the film was when the two guys used their C.I.A. resources to spy on each other and mess up their respective dates with Lauren. They didn’t ruin too much of that in the trailers. Heck, my two favorite scenes weren’t in the trailers or commercials at all. 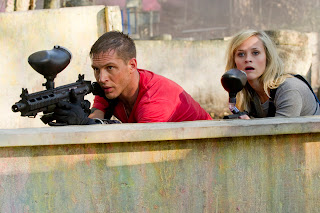 S: Oh I completely agree! The funniest parts were when they were trying to sabotage each other.

A: The last thing I have to say about “This Means War” is simply that, while you’re right that it didn’t set itself out to be anything more than it is, parts of it were derivative of “Mr. & Mrs. Smith” and other spy films (particularly a poker scene that is pretty much straight out of “Mr. & Mrs. Smith”). It certainly had it's flaws, like a thin script, some choppy editing and one scene where the audio was completely out of sync with the video, but for what it was, it's not bad.

S: I will give you that. Some of it wasn’t very creative, but funny anyway.

A: So what’s our final grading of “This Means War?”

S: Ok readers, with all that said, we say it’s a Great Way to Spend an Afternoon, if you’re out on a date, otherwise, Netflix It!


Photos Courtesy of: Inquirer Movies and Collider
Posted by Andrew Keck at 5:28 PM