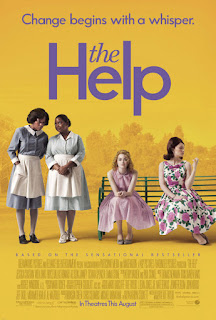 Synopsis: In the early 1960s, Southern socialite Skeeter Phelan (Stone) graduates from college determined to become an writer. Inspired by how her friends treat their black maids, Skeeter tries to get the black women who spend their lives working for white families to tell her their experiences for a book. After finding initial resistance, she is able to get maids Aibileen (Davis) and Minny (Spencer) to tell their stories, leading to both good and bad consequences.

Sarah: Hello readers Many of you, including myself, have seen Tate Taylor’s “The Help.” Andrew, however, had not seen it. So, in regards to this being the week before the Oscars, we are catching up on the Best Picture nominees we missed. I have read the book and seen the movie, and like most books-to-movies, I thought the book was better, but I do think it’s a very good movie with great acting.

But I am interested to hear what you thought, Andrew, coming both from someone who didn’t read the book or is from the South.

Andrew: Well I think those are two separate things, so I’ll tackle them individually. First, coming from someone who has not read the book, I really enjoyed the film. I felt that I got the real gist of the book and the story without missing anything. You’ve told me you thought all of the actors were casted very well, and I’ll have to take your word for it – but I do agree in that I thought Viola Davis, Octavia Spencer, Emma Stone, Jessica Chastain and Bryce Dallas Howard were all exceptional.

Now, as someone who wasn’t raised in the South like you were (Sarah was born in Virginia and lived in Alabama for another 5 years, dear readers), I was totally disgusted with Howard’s character, Hilly Holbrook. I feel that the depiction of blatant racism is eye opening because of how genuine the performances felt. I think the film presented that era in American history quite well. And heck, I’ll go so far as the say that Howard’s character is one of the best villain’s in film history. I hated her.

S: Yes, I would have to say that Holbrook is one of the worst characters ever written. She’s just wicked. Now, Jessica Chastain, Octavia Spencer and Viola Davis are all up for Oscars this year. While I think you will agree with me that they all deserve the praise and if they could give out two different Best Supporting Actress awards, Chastain and Spencer both deserve the praise. What did you think about the other actors that didn’t receive any acknowledge, like Bryce Dallas Howard and Emma Stone?

A: Well as I just mentioned, I think Howard was perfect as Hilly Holbrook. She was just despicable; and while not on the same plane as Hannibal Lecter or Darth Vader, I think her realistic performance deserved more accolades.

Emma Stone is quickly becoming one of our favorite actresses (side note: if you haven’t seen “Easy A” yet, readers, you should – it’s hilarious) and I thought she was great in “The Help.” In regards to her performance, I really don’t understand why she hasn’t garnered award talk because I see almost no difference between her job in this film and Julia Roberts’ in “Erin Brokovich.”

There’s a particular scene toward the last quarter of the film that Emma’s character, Skeeter, has with her mother (played by Alison Janney) that really got to me. For that scene alone she should have gotten more award chatter. I guess in summation, the cast of “The Help” deserved their SAG Award for Best Ensemble.

S: I agree with your thoughts on the actresses, and I think they should have gotten more recognition. Now, with the Oscars coming up, what do you think are the chances of this one?

A: How about we save that conversation for later this week when we delve into our analysis and predictions of Sunday’s Academy Awards, shall we? I think our plan for right now is to touch on the Supporting roles categories on Thursday, the Lead roles categories on Friday and then do Best Pictures and Best Director on Saturday. Then Sunday we’ll have our complete Oscar predictions and we’re going to try to do a running blog of the award show. Sound good?

S: Works for me! And your final grading for “The Help” is?

A: Now that it’s out on DVD, I do think this is a must-see film for all the performances alone.