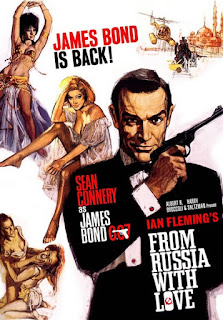 Andrew: Hello readers! It’s Day 2 of our 7 Days of 007. Yesterday we kicked off our weeklong celebration of Skyfall’s release by watching the very first Bond movie, Dr. No. For our second night I felt it was prudent to have Sarah and I watch the second Bond movie, From Russia With Love. I feel, and it’s generally believed by Bond fans, that From Russia With Love was not only an improvement on Dr. No but is still one of the best films in the franchise.

So Sarah, now that you’ve seen the first two Bond films on back-to-back nights, how would you compare From Russia With Love to Dr. No?

Sarah: It’s leaps and bounds better. It’s like the filmmakers went back to the source material and decided they needed to choose a certain path to take Bond and go with it. I found that this film was more the Bond we know and love today. He was more a spy, there were more gadgets for him to play with…and you know, we’re introduced to the characters better in the second film.

The villain has an ominous feel to him because you never quite see all of him but you hear his voice. He has these henchmen working for him, we see them, we know what part they play. It’s just so much better than the first one.

They kind of finally figured out the way they wanted to take the series.

A: Now the villain you mentioned, the unseen man who was stroking a white cat, is Ernst Stavro Blofeld – the big baddie in the series. But the actual henchmen that Bond are two SPECTRE agents named Grant, played by a much younger looking Robert Shaw (Jaws), and Rosa Klebb, played by Lotte Lenya.

Again, as you said, they’re both much more visible than Dr. No was in the first one, and they’re also quite the physical match for Bond as well.

S: Definitely. They make a point of showing that Grant is trained almost specifically to kill Bond.  He’s very combat-driven and is an equal in every way, if not superior to Bond. So I found that that was more interesting, he was more of a threat to Bond. And the Bond girl in this one, Tatiana (Daniela Biancha), has a much bigger role in this one than Ursala Andress did in Dr. No. She has a larger presence.

One of the things I didn’t like much about Dr. No was that I felt it dragged on a bit, whereas this one kept a much better pace. I was also more invested in the characters. It was a very well made movie and is almost better than the first one in every way.

A: You mentioned the gadgets earlier. This was the series’ introduction to Q, played by Desmond Llewelyn. (Fun fact: his character isn’t called Q here, but is instead credited as “Boothroyd.”) What did you think of the briefcase he gave Bond?

S: I found it a little cheesy, but it’s also so classic. It was clever, very clever.

S: It’s like the Swiss Army knife of briefcases!

A: Yes! It’s very usable; it has a lot of functions that 007 can use. It’s a good indicator of future gadgets and innovations Q comes up with for Bond.

What did you think of Connery in this one compared to Dr. No?

S: I definitely felt he was more of the classic James Bond we associate with Connery in this one. He’s still a ladies man but is very observant, he’s great with a gun, he’s a lot smoother in the field, I just felt he had a better grasp of his character here.

A: The fight between Bond and Grant on the train is another one of the reasons this is a highly regarded Bond film, both by the series’ standards and even by Hollywood standards.

S: Well it’s in such a small area. It’s pretty impressive they’re able to shoot a fight like that in such close quarters, because they’re pretty big guys! The fight was sort of claustrophobic and well-staged, with the lighting and the idea that they can’t quite see each other very well. I liked it.

This one was much better than Dr. No, in my opinion. I liked it. There weren’t any of those classic Bond-isms like, “Bond…James Bond,” or “Shaken, not stirred…”

A: Yes, but it also introduced other staples of the franchise like Q’s gadgets and Blofeld.

S: So it’s definitely better than the first one and I’m seeing many things that pop culture has taken from it like the obvious things Austin Powers took from it.

A: Ok, let’s start wrapping this up. I just want to mention a couple of quick things I love about the movie. I love Robert Shaw as Grant - I love how quiet and stoic he is throughout, I love the fake voice he uses when impersonating Bond’s fellow MI6 agent on the train, I love his real voice that sounds like Quint  and of course I love the watch-wire he uses to strangle people.

I also think the direction by Terence Young is much better in this film and it’s most evident in a scene where Bond is walking outside of the train at a station and we see Grant tracking him through the train’s windows. It’s a brilliant shot, especially when Grant’s hiding between windows but we can see him in a reflection.

A: Ok, so final thoughts on From Russia With Love?

S: Much better than Dr. No. It’s the Bond we know and love and I’m excited to see where it goes from here!

A: Well fittingly we’ll be watching the film that follows this one, Goldfinger, tomorrow as we wrap up our Connery segment of 7 Days of 007!

Photo Courtesy: Filmoria
Posted by Two Tickets For... at 10:53 PM