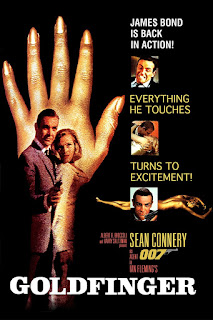 Andrew: Hello readers! It’s Day 3 of our 7 Days of 007, and tonight we concluded our Sean Connery portion of the series by watching the 1964 classic Goldfinger. Sarah, what were your thoughts on it?

Sarah: I liked From Russia With Love better.

S: I can’t quite put my finger on it. I think it’s because I had a hard time with the villain being this chubby white guy from England. I had a tough time because he’s more like the intelligent banker who likes his gadgets versus a villain with some brawn that can hit you where it hurts, like we saw with Robert Shaw’s villain in From Russia With Love.

A: To play Devil’s advocate, Goldfinger’s plan was to hit everyone where it, arguably, hurts more – fiscally.  He wasn’t trying to take over the world, he was just trying to get rich.

S: I will say though, Pussy Galore is by far the strongest Bond girl so far. She’s a take-no-prisoners girl, although she’s wooed by Bond, but let’s be honest what woman isn’t? Yet she’s still kicking ass and taking names later, and I think that shows a shift in the way women were portrayed in the films and maybe even culture at the time. It was very interesting.

A: Ok, so you weren’t a fan of Auric Goldfinger as a villain, but what did you think of his henchman, Oddjob?

A: Because generally speaking he’s one of the more popular villains in the entire series.

S: Well yeah because he’s a humorous henchman to watch.

A: Well it’s not only that, but he’s got an awesome hat that he can kill people with, he has a ton of strength, he doesn’t speak, he’s just awesome.

A: You’re making this a tough one!

S: Because I didn’t…it was just okay.

A: I personally like From Russia With Love better, too, but of the first three Bond films I do think this one has the most direct and most easily explained plot. It’s a ridiculous plot, but at the same time it makes a lot of sense.

S: Well it’s a relatively realistic plot. I think, like, the drastic change in location midway through the movie threw me. I don’t understand why they threw in some random characters, like Jill Masterson’s sister. And then I found the middle section pretty slow. The whole Switzerland thing? I understand they had to find a way to introduce Pussy Galore and this was their way of doing that, but I felt it stopped the movie dead.

S: Yeah, that too! We get to Kentucky and we go to a horse farm? How stereotypical is that?

A: Well to me it’s that Bond is thrown in a cell, so your protagonist is out of the picture for a bit, and while I like Goldfinger’s presentation of his grand scheme…

S: I didn’t understand what the deal with all those gangsters being present was about. I understood that they all had brought or smuggled pieces into the country for Goldfinger…

A: Yes, and then he kills them so that he wraps up any loose ends and they can’t be traced back to him.

S: I understand that, I get it, but you know what it really is? I was bored with this movie.

S: Ok, I was bored by it. I felt that…and maybe this is the problem I have with the older Bond movies right now, but I feel like they’re all the same.

S: You know, Bond gets his assignment, we’re introduced to the bad guy, Bond goes out, a Bond girl is introduced, Bond fights the villain and he wins. Movie over.

A: Have you ever seen a Bond movie before?? That’s what they’re ALL like!

S: I know, but I think the early ones were SO simple. They’re too simple for me.

A: Ok, so you bring up an interesting point: is it more the movie itself that you find boring or too simple, or is it the time period in which the movie was made? Our generation is a bit jaded because movies today are so different from the ones made 50 years ago.

S: Here’s the thing – I love old movies; certain kids of old movies. I think it’s old action movies that bother me. Because to me they are so unbelievable and cheesy and I guess I need to take them for what they are and not try to overanalyze them. I guess they weren’t really meant to be deeply analyzed, they were meant to be taken as they were.

A: Yes, but my point is that an older movie like this, from 1964…action movies had been around, yes, but for all intents and purposes they were still in their infancy. So there are going to be pacing problems, there are going to be ways that they shoot action scenes that we’ll find problems with. But is that something you can straight up say is a negative about a movie like Goldfinger, or do you have to take it for what it is – a product of its time?

S: It’s definitely a product of its time. But I think it changes the way we do our reviews about it because…you literally cannot compare a 1960s movie to a 2012 movie. But it’s extremely hard not to.

A: Ok, but remember we’re not just reviewing this movie, we’re holding a discussion on it and these older Bond films. The reason I had us watch this was – much like the first two – we’re still growing into the Bond franchise. This is only the third of 23 films. There are plenty of classic moments like the laser scene, and the exchange of “Do you expect me to talk?”

S: “No, Mr. Bond, I expect you to die!” Yes! And all of these classic lines and moments from these first three Bond films we’ve watched…a lot of modern action films are derivative of these older Bond movies.

A: But we have to remember with these older movies, at the time of their release all this stuff was fresh and new! Again, it’s more of we’re not looking to criticize the movie, but we are critiquing it and trying to find an appreciation of it.

I agree with you – Goldfinger is not and never has been one of my favorite Bond films. It has some pacing problems, I don’t think Goldfinger is one of the better villains…

S: I like the idea of the villain but I think it was a casting issue. I just am having a hard time getting over his outward appearance. I can’t explain it. He looks like Winston Churchill. I don’t know, he just looks like a bumbling fool to me and it makes it hard for me to take him as this mastermind and criminal.

A: I don’t see him as a fool. He looks like a legitimate businessman, and that’s sort of what he is.

S: Here’s the thing – I can appreciate Goldfinger for the nuances and the foundation it helped build for the franchise. Obviously movies have taken a lot from these Bond films and it’s very clear that Sean Connery is the original James Bond. He’s great. It’s just…

A: They’re different movies compared to what we have now. Plain and simple.

Ok, we’ve beaten that horse to death, so let’s start wrapping this up and cover some other Bond-isms real quick. What did you think of the Q gadgets in this film, like the Aston Martin?

S: We’re definitely getting into classic Bond territory now. I love the repartee that Bond and Q have. It’s quite humorous and I love it. It’s like an older teacher slapping a young boy on the hand while teaching him.

A: What did you think of the car?

S: It’s everything you could want. I love that he uses everything, but I was bummed that he used every trick the car had basically in one scene.

A: Yeah, I don’t like that he had to ditch it either.

S: Well it got demolished! But that’s reminds me of how Q is always telling Bond to bring his stuff back in one piece and never does. That will always be a running gag in the series.

A: Q even says it in Skyfall. Ok, so final thoughts on Goldfinger?

A: Absolutely. And we’ll start watching some of those in-between films as the week goes on.