Dreamworks' Latest Animated Film Is Sure To Be a Holiday Hit: Our Review of "Rise of the Guardians" (2012) 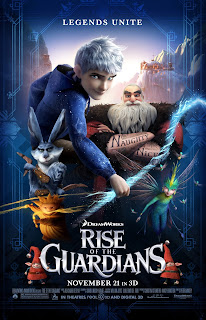 Rating: PG for thematic elements and some mildly scary action

Synopsis: A magical and secret group called The Guardians of Childhood - comprised of Santa Claus (Baldwin), the Easter Bunny (Jackman), the Tooth Fairy (Fisher) and the Sandman - protect the hopes and dreams of children worldwide. Through their classic duties (i.e. delivering Christmas gifts, Easter eggs, leaving gifts for lost teeth) they must maintain children's belief in them in order to protect them.  But when an ancient evil named Pitch (Law) rises from the darkness and threatens the Guardians' very existence, they must reach out to the lonely and misunderstood Jack Frost (Pine) to join them in their cause.

Andrew: Hello readers! Sarah and I were able to catch an advance showing of this holiday season’s newest animated film, Dreamworks’ Rise of the Guardians, based on William Joyce’s “The Guardians of Childhood” book series. In a neat spin on some classic childhood characters, the film’s protagonists – The Guardians, if you will – are Santa Claus, the Easter Bunny, the Tooth Fairy, the Sandman and their newest member, Jack Frost.

Sarah: And here they’re all called something different: Santa Claus is just called North, the Easter Bunny is E. Astor Bunnymund, the Tooth Fairy is simply Tooth and the Sandman is called Sandy.

A: Correct. And what the Guardians do, essentially, is protect children’s wishes, hopes, dreams, etc. and try their best to bring joy to kids around the world. They strive to continually ensure that children "believe" in them, because it's only through strong belief do they truly exist, and only when they exist can they defend the children against evil forces that may threaten them, particularly The Boogeyman…


S: Who is named Pitch, and likes to turn children’s dreams into nightmares, which in a genius move are shown as dark horses, or “Night Mares.”

A: So this is a movie that we’ve seen the trailer for, it wasn’t one that I necessarily felt was a must-see…

S: Definitely! I mean, the holidays are coming up, one of its main characters is Santa Claus and then THE main character is Jack Frost, so it’s totally winter-related. I was really excited about seeing this movie and I’m glad we caught it because it is SO cute and touching!

A: It’s very cute, but the word you just used is probably the best way to describe it, it’s very touching. It’s very heart-felt and it actually made me a little verklempt!

S: Oh it made me verklempt, too! I think that’s funny, when movies like this do that to us. But it was BEAUTIFULLY animated…

A: That was certainly it’s biggest strength.

S: And the best thing about how it looks is we got to see it in 3D and it’s absolutely gorgeous. Just stunning animation, and they made some character choices that only strengthened that animation. Like Sandy doesn’t have a voice, so instead everything he does is through facial expressions or little sand-images popping above his head, and his biggest power is obviously making kids fall asleep and the way they show him doing that is beautiful.

I gotta give Dreamworks a lot of credit because they have a lot of good animators on their team and they did a bang-up job here.

A: I did love how Sandy branches out all these streams of sand all across towns and makes them dance and creates dreams for all the kids with the sand. It’s impressive. The particles of sand and the glow, it’s all gorgeous.

I loved that each Guardian has their own home world, and how each one is vast yet incredibly detailed and beautiful all on their own. Obviously Santa Claus is at the North Pole, Tooth has a Tooth Palace of her own, the Easter Bunny has this cool-looking nature underworld…

S: And he has a name for it, but I can’t remember what it was.

A: But they’re all beautifully rendered. They each look like their own world, as they should. You get an actual feel for how each character fit into their own world and it helped you understand those characters better. The North Pole looks great, but I really loved the idea that while Santa does have elves around, they’re not actually the ones who make the toys. Instead he employs a bunch of Yetis to make the toys as well as be the security around the place.

S: Everything is amazingly thought out, which is a huge testament to the books, I’d imagine. Plus the secondary characters…animated films, for a number of years have been hit-or-miss with their secondary characters that are meant for comic relief. Recently there’s been some successes like Mater in Pixar’s Cars and the Minions in Universal’s Despicable Me, and I think Dreamworks has found another success in Santa’s elves and the Yetis, along with Tooth’s little tooth fairies that help her out…

A: Baby Teeth, as they’re called.

S: Yup…they’re all hilarious and cute in their own rights and I’m sure Dreamworks will be very happy they have some new toy characters they can sell as stuffed animals.

A: Let’s talk about the movie’s plot now…

S: Well it’s a pretty simple plot but that isn’t a bad thing, it means it was easy to follow and shouldn’t have been terribly confusing for children. What did you think?

A: It’s definitely a simple plot, as well it should be because it’s geared towards kids. But while it’s a basic premise it’s also a classic premise of the innocence and joy that children inherently have. I loved that the Guardians exist because children believe in them. Even if adults don’t, the children do and that’s where they get their life force from.

Pitch, must like the Guardians, only has life and power when children believe in him but he hasn’t had that since the Dark Ages when the Guardians originally rose up and defeated him. So now Pitch wants to come back, snuff out the kids’ belief in all of the Guardians and he ends up becoming quite the credible threat.

That entire idea is one that is very touching to me in how the filmmakers executed it. It made me think, because we’re adults now, when we were kids we ABSOLUTELY believed in all of these characters (ok, maybe not Jack Frost as much, but the others definitely).

S: And I think at the heart of every adults, they still want to believe in those things because childhood is a magical and fun time that brings joy and excitement to their lives. This film helped relive that.

A: Another aspect of the plot that I felt was pretty strong was the storyline involving Jack Frost, the movie’s main protagonist. At the start of the film we learn that Jack was born out of a frozen lake in the middle of the woods, created by The Man on the Moon (a full moon, of course) but he’s never told by the moon WHY he’s there and what his purpose is until he’s chosen by the moon to be a new member of the Guardians.

S: And even then he’s not quite sure why the moon has chosen him, so he’s on a quest throughout the whole movie…

A: A struggle, really…

S: To discover who he is and why he was chosen to be a Guardian. When we finally find out why, and what the inner source of his power is, it’s all quite touching.

A: Hence the reason it made us verklempt!

S: Yes! I really liked Rise of the Guardians. I really, truly didn’t have any problems with it.

S: Oh yeah! And there are some big names in this one! We have Chris Pine (People Like Us) voicing the main protagonist, Jack Frost, Alec Baldwin (NBC’s 30 Rock) voices North, Isla Fisher (Bachelorette) voices Tooth, Hugh Jackman (Les Miserables) voices the Easter Bunny and Jude Law (Anna Karenina) voices Pitch. They all do an amazing job. I mean, when the Easter Bunny opens his mouth it’s obviously Hugh Jackman…

A: But at the same time, rarely do we in America ever see Hugh Jackman in a film where he uses his normal Australian accent.

A: True. I liked the idea that the Easter Bunny is Australian. I also think Isla Fisher is perfect as the Tooth Fairy. Having now seen it, I can’t think of another actress who should have voiced that character.

A: Maybe. But Isla Fisher…we got it in Wedding Crashers and Bachelorette…

S: It actually reminded me of her voice from Confessions of a Shopaholic. I know you’ve never seen it, but she plays a very bubbly character like she does here.

A: She just has a great voice for the role. She has a very bubbly and happy voice that fit the character perfectly. Alec Baldwin is great as North, his Russian accent is amazing.

S: I never would have realized that was Alec Baldwin if I hadn’t known that it was him going in. I love that they make Santa Russian.

A: And he’s almost like a Russian gangster because he has a ton of tattoos, including some tattoo sleeves that say “naughty” on one arm and “nice” on the other. But yeah, you wouldn’t know it was Alec Baldwin if you just went in blind.

S: I thought did a good job casting Jude Law as the villain…

S: I didn’t have a problem with either.

A: In the end I felt like they were both good choices, especially Pine as Jack Frost when you get towards the end and we find out what his history is. THAT is when Pine’s voice really works for me, or when he’s playing around with kids.

Otherwise, and I got this from seeing the trailer originally, there was a disconnect for me between Pine’s voice and the way the character of Jack Frost looked/acted. As the movie went along I got used to it and it grew on me. Same with Jude Law as Pitch.

So, the voice-acting – and we mentioned this with Wreck-It Ralph – is one of the most important things for an animated film.

S: It really is, because if you miscast a character then it can ruin that character and maybe even the film incredibly quick. It could destroy a movie, at least in our eyes, it really could. For the average movie-goer they may not have a problem with it, but you never know.

Ok, overall I really liked Rise of the Guardians. I thought the filmmakers did a great job, it’s definitely one to see in theatres because it’s so gorgeous…

A: And this is one we’re highly suggesting you see in 3D if you can because it just adds to the depth of the entire universe that this film lives in.

S: And it’s a great family movie! It’s a great one to bring the kids to, but make sure your kids are able to sit through some parts that might be a little scary. Sometimes when Pitch is on the screen he does some things that might be too dark for some kids.

A: Agreed. But yeah, Rise of the Guardians is wonderfully done and I think it’s going to be a huge hit over the holiday season.

S: A HUGE hit, for sure. This one is going to be a holiday classic someday, mark my words.

A: And I hope they make another one. They have the material, since it is a book series, after all.

S: Count me in as being looking forward to a sequel!