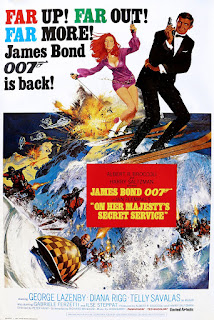 Andrew: Hello readers! It’s Day 4 of our 7 Days of 007 and tonight we watched On Her Majesty’s Secret Service, the first Bond movie made without Sean Connery as 007. Connery had decided after You Only Live Twice that he was finished with the role, so the producers moved on with a new actor as their star, and they found George Lazenby. He was a model in a commercial the producers saw and was given an audition, which he won.

Sarah, now that we’ve seen On Her Majesty’s Secret Service, tell me – what did you think of Lazenby’s portrayal of Bond?

Sarah: At first I was a little skeptical as to whether or not he was going to work, but as the movie progressed I actually didn’t mind him! I actually liked him in the role. I felt he did a good job. Sometimes I feel with Connery that he’s a little too smug, like he knows he can get by on his good looks and his charm. I didn’t get that with Lazenby.

I also found this to be much more action-packed than any of the Connery ones we’ve watched this week. Lazenby does a great job with the action scenes, and that separated him from Connery to me. I thought he did a great job.

A: He’s certainly not the greatest actor in the world, but I thought he did fine for character in his only turn as Bond. Like you, at first I wasn’t sure how he’d fit in the role as he starts off kind of bland, but as the movie goes along he kind of starts to come into the character as his own. We got used to it.


I think it kind of helps that partway through the movie, about a third or maybe halfway through I’d say, he goes undercover and speaks in an accent. That voice he used actually caused me to not be so thrown off by the fact that it was a different actor playing Bond because I knew he was supposed to be using a different voice.

S: Well, what did it for me was at the very beginning he makes a comment after he gets rejected by Tracy, he says, “This never happened to the other guy!” And I loved that line because they made a nod to the fact that there WAS another guy and they weren’t trying to pass him off as Sean Connery. I appreciated that.

A: Going back a bit, I think you’re spot on with the action bit. I know we were talking about it during the movie, especially during the bobsled scene (and I’m sure that wasn’t really Lazenby but was instead a stuntman), but Lazenby’s Bond is far more physical than Connery’s. He skis, he bobsleds, he gets into all sorts of fistfights…I liked it. I wouldn’t have minded if he had done a few more films. As it is though, this is his only one.

S: Yeah, and I think he did well for it being his only one. Really he was the man who had to follow Connery, so he was really doomed from the start.

A: He really was.

S: You gotta give him mad props for taking the job to begin with.

Moving on, I really liked Tracy (Diana Rigg) as the Bond girl. Her character, since I know the Bond lore a bit, I knew she was doomed from the start. But she does a good job. She’s very…she’s not like the other Bond girls that seem to just melt in his arms. She can be defiant.

A: You just mentioned that she was doomed from the start. Does that mean you saw this film’s ending coming from a mile away?

S: I did. I somehow knew that she was going to die. Bond can’t fall in love, and when he does it always seems to end badly. Because it would completely change the character. He’s a tragic hero. It sounds sad but he’s not allowed to fall in love.

A: That’s in interesting take on it. I’d love to know what people thought of the twist when the movie first came out years ago.

S: Same here. Here’s another thing about Tracy they kind of talk about a bit and it’s something I wish they had gone into a little more, but when we first meet Tracy she seems suicidal and reckless. That’s how they introduce her, and she changes through the course of the movie because of James, and I understand that but I think they kind of glossed over it a bit. It wasn’t the strongest point, I guess.

A: I agree with you in that I think she’s probably the strongest Bond girl in all of the films we’ve watched this week. It helps that she’s in it from the start. Most Bond girls up to this point kind of come in only for a little bit here and there, or the main one comes in around the third act. We saw that with Honey Ride and Pussy Galore.

But this time she’s in it from the start; she’s actually a big part of the story. And then Diana Rigg is a strong actress!

S: She’s definitely one of the strongest actresses we’ve seen in the Bond films this week. I think that that gives her some credit as well. It didn’t hurt that she and Lazenby had good chemistry on-screen too!

A: I was just about to make that point. I think part of what helps with their chemistry and the dynamic between the two of them is that it WASN’T Connery. If it had been Connery she might have been overshadowed a bit. But since it was Lazenby I sort of saw them on more equal ground.

S: Agreed. I liked that aspect of this movie a lot.

I liked Blofeld here. I liked watching this because it’s so clear that Dr. Evil from the Austin Powers movies is so clearly molded after Blofeld.

A: I mentioned this to you during the film but I think it’s a fun fact to repeat here, but in every Bond movie that Blofeld is in he’s portrayed by a different actor. This time it was Telly Savalas, who would go on to star in the popular detective television show Kojak.

But yeah, Dr. Evil is a bit of a mixture of Telly Savalas’ Blofeld and Donald Pleasance’s Blofeld. Pleasance, of Halloween fame, played Blofeld in You Only Live Twice and in that version he has the facial scar that Dr. Evil kind of has, too.

S: Oh I forgot about the scar!

A: So this is one of the more famous portrayals of the villain, and I liked his voice. He has a great voice.

S: Yes! That really helps. He had a great voice and he seemed to be a pretty good actor. He was easy to hate here.

On a negative side about this movie, I felt the plot was a bit of a weakness. Or at least Blofeld’s evil scheme, of kind of brainwashing these attractive women to do his bidding when he needs them to.

A: I thought it was a creative scheme.

S: It’s creative, but it’s not like it even gets a chance to take place before the final assault on Blofeld’s compound happens.

A: Yeah, they don’t get into it too much but I thought they did a good job setting up what was going on. And again, for the time period this was made in it was a creative idea. The execution wasn’t the best though, yes.

You bring me to a good point now – this is one of my favorite older Bond films because of the setting up in the Swiss Alps – Blofeld’s compound. The action scenes, the finale, the gondola, how beautiful it looks, all of it.

S: I liked the settings too because it looked like they were actually shot on location for the most part.

One complaint that I have, one big complaint that really bothered me with this movie was the editing. It’s extremely choppy. I mentioned this during the movie – at times it seemed like the movie was claymation…like it was stop-motion. And at times there were obvious attempts at some kind of slow motion that were terrible.

And I know this is one of those things that you kind of have to take for the time period it was made, but it was just way too choppy, especially during the fight scenes. There were also too many times I could see continuity issues where the shot jumps from one cut to another in the same shot.

A: It was definitely herky-jerky at times and the editing is definitely a weak spot in this film. I’m sure we’ll knock down our final score a bit because of that.

Ok, so some of the other talking points we’ve been covering for these movies are the Q gadgets and the music. There weren’t really any gadgets in this film other than a safe-cracker/copy machine that Bond uses but that looked like it was given to him by someone outside of MI6. Maybe I’m wrong.

S: Yup, and there was a new car but it wasn’t a special car at all.

A: What did you think of this movie’s theme song? It was a pure instrumental song called “On Her Majesty’s Secret Service” and I think it’s one of the biggest strengths of the film.

S: I loved it. I love instrumental songs. It felt natural, it didn’t feel forced and I like that it didn’t have lyrics to it.

A: It’s always been one of my favorites because there are no lyrics, it’s still upbeat, it’s brassy and it fits well with the action. I’m glad you liked it, too.

S: Music’s a big thing for me and this was a good one. They also brought back the classic James Bond theme in the climactic battle and that’s always a plus to use.

A: Ok, final thoughts for On Her Majesty’s Secret Service.

S: Overall I really enjoyed it. I kind of feel bad for Lazenby that he got such a bad rap for his portrayal of James Bond. I can only imagine how tough it was to reach the expectations that were set by Connery. Regardless, this is a fun addition to the Bond franchise.

Photo Courtesy: rolexblog.blogspot.com
Posted by Two Tickets For... at 10:59 PM