A Six Pack Of... The Most Annoying Movie Theatre Snacks 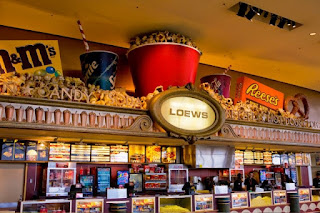 Andrew: Hello readers! The month of May is almost over, Memorial Day has come and gone, and we're fully into the swing of 2013's summer movies - and summer movies mean packed movie theatres. Sarah and I have been going to a number of the big blockbusters that have come out this month so far, along with a number of sold-out advanced screenings, and there's something that's really been on my mind while sitting in this packed theatres both while we wait for the movies to begin and when the movies are playing - movie theatre snacks are LOUD.

(Full disclosure, I'm a bit weird in that little things like a ticking clock, a dripping faucet, or a morbidly obese dude munching on popcorn with his mouth open totally drive me nuts.)

So after a month of movie-going with sold-out crowds (and one not-so-sold-out crowd), we thought it would be a perfect time for us to do A Six Pack Of... The Most Annoying Movies Theatre Snacks!

Sarah: Well let's start with the smelly food category. With all the free screeners that we are seeing ahead of the release dates, this means that we have to show up a good hour before the theatre opens for seating. Many people that go to these bring their dinner with them while they wait. This can really bring some weird things to the theatres - from strange smelling soups to messy sandwiches.

And while we, too, have brought dinner with us, the extent of ours has been PB&J's. When you start to get into the messy dinners it just becomes rude. While the theatres are big, there isn't great air circulation  Smell carries and can fill the space and it can get gross. You don't know what allergies people have around you. You don't know if something could set off their gag reflex. So if you're going to go with something pungent, have someone hold your spot and go eat it outside.

A: I don't think I could have said it any better! This one is truly mainly about being courteous to your fellow movie-goers. Don't bring something smelly into a small, cramped space. If they sell it at the concession stand that's one thing, but if you're bringing it from home or from a fast-food joint (which is what we're really talking about), then that's just rude and annoying.

2.) Peanuts In The Shell

A: Okay, so this one isn't one we've come across recently when we've seen something together, but I recently saw Aftershock, starring Eli Roth, in a theatre a few towns over with a friend of mine (it's a horror movie, Sarah was working late, so she wouldn't have seen it anyways). Anyhow, it's me, my friend, and about six other people in a very tiny theatre. During the pre-movie commercials/trivia and through the trailers not a single one of us was eating anything. But as soon as the movie started playing, the couple sitting directly behind us busted out a bag of peanuts in the shell and proceeded to crack them open, drop the shells on the floor, and eat their peanuts.

This was a first. Never before in my life have I ever seen or heard someone bringing peanuts in the shell to a movie theatre. Know why? Because they DON'T BELONG. Cracking the shells is noisy enough (annoying), but then you're going to drop the shells on the floor, too (rude), and what if someone sitting near you has a peanut allergy (inconsiderate)? That was a party foul. Don't bring peanuts in the shell to the movie theatre, gang.

S: This just blows my mind that this actually happened! This isn't a bar! People have paid good money to come and see this movie! We don't need you to be here disrupting everyone's experience. And how rude for the people that work there! Yes, it's their job to clean the auditorium but that is just SO rude!!!

S: This one can be a little tricky. And in all honesty this really bothers Andrew more than it does me. There is the right way to eat chips in public and a wrong way to eat them. This might seem like a no-brainer to everyone, so why don't we all follow those etiquette rules!? Chips are a closed mouth food. And even then they can still be loud, so I just don't think they're a quiet auditorium food.

But like I said, this bothers Andrew even when we're at home and I'll be eating chips next to him. He's weird, but you learn to live with that.

A: Here's my thing with chips - I know they're delicious, and you'd think they'd be a perfect movie snack. And you'd be right.....if you're at your own house. But in a public movie theatre? Where odds are you've brought a bag of them, so not only are you munching on chips but you're digging into the bag, too? That's just too much noise. If you've brought them in a plastic baggy, that's a bit better.

It also depends a bit on the type of chip that's been brought. Are they regular potato chips? Those aren't so bad. Are they Sun Chips? Or kettle-cooked potato chips? Now we're getting somewhere. Those are as noisy as they get. (Delicious, yes, but noisy all the same.) But this one, for me, boils down to the bags being noisy and people chewing them with their mouths open. Keep 'em closed and we'll be good.

A: This one is related to Chips, but there's an inherent differece - these are sold at movie theatres, so they're generally thought of as being just fine. And for the most part I'll agree. But when I order nachos at the movie theatre, they're pretty much gone by the time the movie starts because I don't want to be chomping away at them while the movie is playing. Nachos can be very noisy when you're eating them, especially if the person near you is an open-mouth chewer. But beware people, if you think we're getting too nit-picky because nachos are sold at the concession stand, this is just the beginning.

S: The hardest part about nachos is that since they are messy there are other noises that accompany eating them besides the crunch of the chip. There's the slurping, the licking of the fingers and smacking of lips. Bodily functions that just are kind of weird to hear in a movie theatre. It's dark and so it just gets weird. Depending on the movie theatre these can also verge into the "smelly" category, too, if they include options like meat, jalapeno peppers or other accoutrements.

S: There are only certain kinds of candy that really get on the nerves, and this is hard candy in a cardboard box. The kind that you smuggle in your purses or coats from Walgreens since WHO PAYS $4 FOR CANDY?! It makes total since, but the shaking back and forth of the candy in the box is crazy annoying. It's really a little nit-picky, we know, but it can be pretty disruptive in a quiet theatre.

A: Let's break down some of the more egregious offenders here:

I'm sure there's a ton I'm missing, but you get the point. These are all fantastic candies, and every now and then we'll partake in some Junior Mints or Raisinets, but please do us a favor: if your candy comes in a box and that box is wrapped in plastic, please unwrap the box before the movie starts. (NOTE: Nerds are probably the worst of these candies for a movie theatre because they sound like a rain stick.)

S: The last one is the holy grail of movie snackage: popcorn. This is THE go-to movie snack and while it's not my favorite, it really is where all the money at movie theatres is made. It's salty, buttery and (of course) CRUNCHY. Once again, it's a closed-mouth process (as really all food is) but for some reason when people get popcorn at the movies they are suddenly all raised by Neanderthals. The worst is when the huge fat guy sitting three rows up is shoveling handfuls of the snack into his gaping maw with such ferocity that it makes you want to gag. It's crazy. And it's kind of gross too.

A: We know this is sacrilegious, but seriously, popcorn might be the worst. It's not only crunchy, but whether it comes in a bucket or it comes in a bag, it's noisy when someone is digging their hand into it, scrounging up a handful to shove in their mouth. I'll admit, I can handle other people around me eating popcorn when I have some of my own (which isn't often), but that's only because the popcorn I'm eating is noisy enough to drown out the other people's. The worst is the scenario Sarah just described, where someone just takes a handful and mows down on it. That's disgusting and noisy. You're in public. Don't eat like a Neanderthal.

The crazy thing about popcorn is the variety of ways that people eat it. Some take huge handfuls and shove it all in their mouths, some take handfuls and bite away at it in many bites, some people take one piece and toss it in their mouths, some people take a couple pieces and eat those (which is how we do it), and so many more. But the recurring thing for whatever way you eat your popcorn is that it's noisy. Are we being prudish? Maybe. But if we ever owned our own movie theatre, we can guarantee you we would NOT sell popcorn at it. (We'd also probably then go out of business.)

S: Okay readers! That's our the last of our Six Pack! What kinds of movie snacks do you think are loud and annoying? Did we forget any kind that gets on your nerves? Or do you completely disagree with us and think we're out of line? Let us know what you think down in the comments! And thanks for reading!