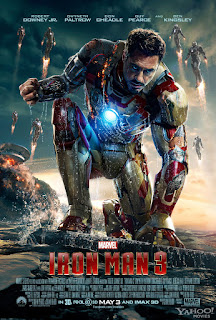 Andrew: Hello readers! Earlier this week Sarah and I went to see last weekend’s gargantuan hit Iron Man 3. I had seen it once already without Sarah (you can read my solo review of it HERE), so this was the first time she had seen it, meaning this review will be a little different in that it’s going to be Sarah heavy.

Sarah, I know that I personally was very excited when this film was released, but it wasn’t until we were leaving the theatre and getting in the car that you admitted to me that it had never been one you were particularly jonesing to see.

Sarah: It wasn’t, really. Don’t get me wrong, I love the movies that comprised Marvel’s “Phase 1” and I love them all the way up to The Avengers, but I’ve had a little bit of a roadblock getting my head wrapped around the films that are going to be following The Avengers. I feel like there was all this build-up and a climactic event in The Avengers and now we’re going back to the separate movies – and I understand their reasoning for doing so, I get Disney and Marvel’s plans for Phases 2 and 3, but I think I’m just having a hard time wrapping my head around them.

A: I see what you mean. And you’re right, they’ve definitely labeled Tony Stark/Iron Man, and more specifically Robert Downey, Jr. as the lead of the group – but again this brings me back to how you weren’t really excited for the movie last night. Now that we’ve seen Iron Man 3, what did you think of it in general?

S: I could definitely tell there was a different director. I felt the style and feel of it was much different than the first two.

A: Can you describe that feeling at all?

S: It’s hard…it’s hard to explain. I feel it was a little grittier, like…it felt a little Nolan-esque at times to me. I don’t think that was necessarily the intention, and I didn’t like that. I love Nolan’s movies and we’re so excited for Man of Steel to come out, and we loved all the Batman movies, but yeah – I think I just didn’t quite like the grittiness of it.

It’s more violent than the first two, I felt. I can see why you liked it, because it felt a little like James Bond at times, and it had some horror aspects to it. Extremis soldiers walking through fires and bodies half-burned off and that one chick hanging from the power lines? That kind of gave this movie the feeling of a horror movie at times to me.

But at the base of this, you still have the same Tony Stark that’s cracking the same jokes that he’s been doing for the past three movies, and now a fourth. It was just a little redundant to me.

A: A big part of the storyline that I enjoyed was seeing how Tony was affected by what happened to him in The Avengers. What was your reaction to that?

S: I liked their attempts at making Tony vulnerable with his PTSD and his anxiety attacks. But more than feeling bad for him I ended up feeling really uncomfortable watching it. I was just like, “Why do people keep mentioning New York if he keeps reacting this way???” So I think that that wasn’t the reaction they wanted.

A: Probably not, but since it had that sort of visceral reaction from you and made you uncomfortable when he’s going through those attacks…

S: I’m not sure I was uncomfortable with the attacks themselves or Downey’s acting during them (laughs). In which case, I don’t think they wanted that.

I don’t know. I thought the movie had its funny moments. I loved Ben Kingsley in it. I thought he was the shining star of the entire movie, personally. I thought Guy Pearce as Aldrich Killian was just “meh,” he played a fine bad guy but he didn’t really do anything for me here.

A: In my solo review I compared Pearce to Sam Rockwell’s role in Iron Man 2. They’re pretty much playing the same kind of guy.

S: They really are. And the problem with them playing those kinds of guys is that they’re both really good actors and they’ve been put in roles that are very two-dimensional. So I had a bit of a problem with that.

A: What did you think of the increased presence of Gwyneth Paltrow and Don Cheadle?

S: I like Don Cheadle, I think he makes a good sidekick to Tony, though I think he’s a better actor than these movies give him credit for.

I’m not a big fan of Gwyneth Paltrow, I don’t think she’s a good actress, so I think her role as Pepper Potts is about the best she can do now. I wasn’t a fan of her increased presence, though I understand why her role is expanded here.

Up until now every other Avengers movie has had a strong female presence in it, except for the Iron Man movies. And now we have that. I mean, she’s always been there but she hasn’t always been a main focus.

S: Eh, yeah, but not quite like Natalie Portman was in Thor or Hayley Atwell was Captain America or even Scarlett Johansson was in Iron Man 2. I’m talking about girls who actually go out and do something. I mean a strong female presence, and more of a lead character. I’ve always felt like Pepper was a secondary character. Like yes she’s there,  but she doesn’t do a whole lot more.

A: In the car coming home from the theatre, you mentioned that you didn’t really like the Extremis plotline.

A: To play Devil’s Advocate, though, even Killian makes a good point, and I’m paraphrasing, that when a god falls from the heavens, subtlety’s had its day. In the Marvel movies so far we’ve had gods, we’ve had aliens, we’ve had monsters…so something like Extremis, which is based in science, I was okay with that.

S: You’re right, you’re right. And I think it was more when Killian started breathing fire. That put it over the top for me. I was fine with it until then, but when that happened it lost a bit of credibility for me.

A: What are your thoughts on the subplot with the little kid in Tennessee, Harley (Ty Simpkins), whom Tony befriends?

A: But did it work for you at all? I personally thought Downey and the kid had pretty good chemistry.

A: I felt it was a little shoehorned in…

A: You mentioned how you noticed that it was very apparent that Jon Favreau didn’t direct this one, that Shane Black did, but what did you think of the script? Because that was one of the main reasons Marvel brought Black on to direct this one – they wanted him to help write the screenplay, too.

A: I guess I kind of meant more along the lines of the dialogue, because I thought it was really snappy and fit perfectly with the characters involved. Tony had plenty of quips, there was a lot of good comebacks and one-liners from characters...Tony even called the kid a pussy for cryin’ out loud!

S: That reminds me! I thought the script and the movie as a whole were a lot harsher than the first two movies. With the Extremis, the language, the gun fights, I felt like this movie was far more deserving of its PG-13 rating than the others.

But again the one-liners and stuff, we’ve seen that time and time again with Tony in the first two Iron Man movies and The Avengers.

A: I don’t know, I loved it. And it wasn’t just Tony, I loved when he was in a gun fight with some baddies and the last one standing drops his gun and says something like, “I don’t even like working here. These guys are weird,” and runs away. Stuff like that was funny.

I just found a lot to like with this one. I really liked the script and the dialogue. I thought it was different. And with bringing Shane Black in, you know, I really did not enjoy Iron Man 2 that much so I thought it was a good change of pace for a new director to come in.

S: Like I said earlier, I think I might just be over Iron Man. Point being, I could’ve waited a little longer for a new Iron Man movie.

A: Okay, so overall, final thoughts on Iron Man 3?

S: If I’m ranking this against the other Iron Man movies, I’m going to rank this one third. And then for the Marvel movies as a whole? I’m going to put it only above The Incredible Hulk.

A: Okay, now that we’ve given our general review, let’s get to our final talking point with a **BIG OL’ SPOILER ALERT** for anyone who still hasn’t seen the movie. What did you think of Ben Kingsley as The Mandarin?

Even better was it basically turned into Ben Kingsley being Ben Kingsley. He has a British accent, he has his humor going - because he can be a funny actor – and I loved it. I thought it was such a fun twist and so funny. It was perfect.

A: What about what it did for the story, when it turns out that Aldrich is the one actually calling the shots?

S: I kind of figured Killian was the guy behind everything, but I sort of thought it was more like in Iron Man where the terrorist group that kidnapped Tony was a real terrorist group but Jeff Bridge’s Obediah Stane was the one pulling the strings. I thought this was going to be more like that.

Again, I didn’t really like the story to begin with, so it didn’t really bother me that it changed the way things were. As Tony said, it was a revenge story the whole time, but it wasn’t just about Tony’s revenge on The Madarin for hurting his friend, it was about Killian’s revenge on Tony, too.

A: That’s a good way to think of it, I hadn’t thought of it like that before.

S: So I thought that was interesting, but yeah, I thought the Ben Kingsley thing was funny. I understand that fanboys probably aren’t too thrilled about it because it’s not the way The Mandarin is supposed to be, but they have to remember that Marvel only has to loosely follow the canon for these films if it makes for a better film.