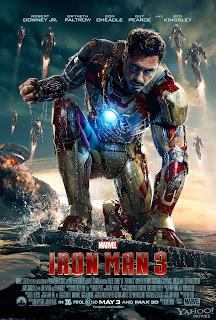 Andrew: Hello dear readers! Today I bring you a very special version of Alone in the Dark because I’m not doing a solo review on a horror movie. As I’m sure the headline, the poster picture, and the link you probably clicked to get to this page have already told you, this is a solo review of Iron Man 3! I got to see the movie a day early thanks to an employee screening at my place of work (we’re owned by the same company as Marvel), but Sarah had to work late tonight so she couldn’t go. We’ll see it together after the weekend, but for now, here’s my take on it.

Starring Robert Downey, Jr. in his fourth turn as billionaire/playboy/philanthropist Tony Stark (aka Iron Man), this is the first film in Marvel’s “Phase Two” – meaning it’s also the first Marvel film since last summer’s gargantuan hit The Avengers. Without a doubt the biggest question going in to Iron Man 3 is whether or not it could be a worthy follow-up to The Avengers, and thanks to two things in particular the answer – in these eyes – is an emphatic “yes.”


The first of those two things is very obviously RDJ. He continues to light up the screen while inhabiting the Tony Stark character, with his quick delivery and witty remarks. But it’s more than just that – this time we see the “serious” side to RDJ’s Tony Stark. In the aftermath of the alien attack on New York City, Tony is suffering from severe anxiety disorder and starts to break down at the mere mention of NYC and The Avengers. These attacks, his night terrors that keep him awake for 72 hours at a time, and his overwhelming sense of needing to protect those he loves give Downey the chance to stretch his most famous character out a bit from the usual light-hearted wisecracking.

The second, and maybe biggest reason Iron Man 3 is a fine follow-up to The Avengers, is director/co-screenwriter Shane Black. Black has long been a big name in Hollywood for his action movie scripts, such as Lethal Weapon, The Last Boy Scout and The Long Kiss Goodnight among others, but this is only his second directorial effort. That said, most RDJ fans will know that he was a natural fit for this franchise because his first directing gig was for the great RDJ/Val Kilmer action-comedy Kiss Kiss Bang Bang (which he also wrote).

Black injects just the right kind and amount of comedy to the franchise, balancing it out with the heavy stuff, giving Downey and company good material to work with. For not having really directed any big action pieces before, you’d almost never know it because of great action sequences like the attack on Tony’s house and the exciting climactic battle (which is kind of busy, but still the best finale in the Iron Man series).

Whereas Iron Man 2 was a little weighed down because Marvel was trying to shoehorn in the Avengers Initiative as a set-up to what would come later, Black is given the freedom to make a stand-alone Iron Man movie. Aside from the overt mentions to the New York City battle, there are only a couple of brief mentions of The Avengers themselves, which is nice.

I’d be remiss if I didn’t mention the other aspect I absolutely loved about Iron Man 3 – Ben Kingsley as The Mandarin, a terrorist who hides in the shadows, bombs Americans and sends out video messages taking ownership of the attacks while calling out the President.

I’ll be completely honest – I had no prior knowledge of The Mandarin character, so I’m not sure how some Iron Man fans will react to his portrayal in this movie, but I loved it. Kingsley’s vocal choices, mannerisms, and the character’s story…I loved it all. I don’t want to spoil anything so I’ll only say that there’s an unexpected turn with The Mandarin and it’ll either turn a bunch of people off or the crowd will love it, I don’t think there’s an in-between. But count me in the group that enjoyed the hell out of it. A big complaint I could see some people having is that it’s been done before, but this is a different take on it and it’s done well.

Guy Pearce gets to play a similar role here that Sam Rockwell got to in Iron Man 2, and while I like Rockwell a lot, I thought Pearce’s character was much stronger, more interesting, and that Pearce did a swell job with the role. Pearce plays Aldrich Killian, a scientist in charge of a science initiative called Advanced Idea Mechanics who appropriates a regenerative treatment called “Extremis,” created by another scientist named Maya (Rebecca Hall) and, in part, by Tony Stark. Aldrich may or may not also be in cahoots with The Mandarin.

The whole Extremis/AIM conflict was interesting to me, because I wasn’t familiar with it either. So the regenerative properties Extremis gave to Aldrich’s cronies originally struck me as different and maybe out of place, but I quickly got used to it and even enjoyed the different take on antagonists for Tony to face.

There’s honestly not much about the film that I found to be a negative. It’s a touch long, but because of the actors involved and the strong dialogue/plot, I didn’t mind hanging out with the world that Marvel has created. I didn’t love a subplot involving a kid named Harley that befriends Tony, but I didn’t hate it either because it provided some good laughs and showed another side of Stark.

If there’s one thing I didn’t like it was the 3D conversion. I’m not sure why they wouldn’t go and just film the movie in 3D instead of post-conversion, because it just doesn’t look the same, but it really bothered me at times because the CGI effects looked fake at times and it didn’t bring anything to the table.

I'm half-and-half on Gwyneth Paltrow and Don Cheadle getting bigger roles this time around as Pepper Potts and Rhodie (aka War Machine, aka Iron Patriot), respectively. They do fine jobs, but it was a little weird to me when the movie would cut to the "inside the helmet" shot for either of them, as it felt a little too close to their faces. Don't know why it works for RDJ and not them, but it does. Rebecca Hall isn't given much to do, and Jon Favreau gets an expanded role as Tony's best friend/head of security, Happy, which was fun while it lasts.

Other than that, Iron Man 3 is a strong addition to Marvel’s recent run and is a good way to kick off Phase 2. I’d personally rank it as the best Iron Man movie yet, and it leaves me excited for the rest of Phase 2, particularly the upcoming Thor: The Dark World. Not that you need me to tell you, but I highly recommend seeing it on the big screen and I can guarantee you that we’ll add it to our movie collection someday.

So there you have it, readers! My personal take on the first of this month’s many big theatrical releases. Let us know what you think of Iron Man 3 once you see it, and be on the lookout for another review from us once Sarah gets a chance to see it and we can do a joint-review (not unlike what we did for The Dark Knight Rises). Oh, and remember to stay all the way through the credits for the obligatory after-credits scene, where you’ll get to see a familiar face that I hope will make you smile like it did for me.

Photo Courtesy: Collider
Posted by Two Tickets For... at 11:55 PM