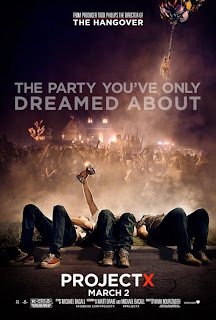 Synopsis: Thomas (Mann) is turning 17 and his parents are headed out of town for their anniversary, so naturally he and his best friends Costa (Cooper) and JB (Brown) decide to throw a party to increase their popularity at school. Things quickly get out of hand and Thomas’ birthday party turns into the craziest house party of all-time.

Andrew: Hello readers! Tonight Sarah and I braved the Friday night middle school crowd at the movie theatre to check out the new teen party flick “Project X.” Produced by Todd Phillips, the director of such new classic comedies as “Old School” and “The Hangover,” and having seen the trailer numerous times, we were fully expecting “Project X” to be an all-out, crazy, raunchy teen movie and I’d have to say we were NOT disappointed.

Sarah: Oh and there definitely WERE middle schoolers in the theatre tonight! But mainly we were surrounded by Abercrombie & Fitch wearing teenage boys, all living vicariously through the characters on the big screen. It was a pretty crazy party, and I’m not gonna lie, I wished that I was actually at the party at times. There were parties at our alma mater that were pretty crazy, but none even close to this!

If you went into the movie thinking that it was going to be a sex and drug fueled crazy time then that’s what you got! What did you think about it?

A: Well it certainly earned it’s R rating. It had it all – drugs (weed, ecstasy), alcohol, sex, language, and there was DEFINITELY reckless behavior and mayhem. All in all it was pretty funny. We certainly laughed at many parts and I couldn’t really ask much more than that.

Did the film have the strongest plot? Of course not. Were the main characters fully fleshed out? Definitely not. But “Project X” is only trying to be what it says on the poster – “The party you’ve only dreamed about” – and in that vein I’d say the movie passed with flying colors.

S: I agree! And this is a great movie to see on the big screen! I will say I wish the music had been louder; and it wasn’t just about the volume in the theatre not being turned up, because the dialogue was fine. When I go to a movie about the party of the century, I want the music to be bumpin’! I was a little bummed that the sound mix was off.

A: Yeah, the sound levels weren’t perfect. Again, this isn’t an Oscar-winning film by any stretch of the imagination, but I did enjoy it. I liked the main leads, especially Costa, who is supposed to be that one friend you have who talks a big game and can’t really back it up. The dialogue they gave the characters felt genuine, which helped with some of the slower parts of the film.

I agree with your sentiment that it’s a great film to see on the big screen, and while this is a movie that would be just as funny on DVD, I would say that if you see it, you SHOULD see it in theatres because of the grand scale of the party. It’s impressive.

S: I want to point out that “Project X” was marketed as a “found-footage” film and it didn’t completely come off that way. It worked at times, but overall it felt like how a movie is normally shot. The way they shot it at times looked TOO perfectly set up. Overall I feel like they could have just filmed this normally, like “Superbad,” and it would have been a stronger movie. There was no need for the “found footage” crutch.

A: That’s actually something I was thinking as we left the theatre. Good job pointing that out, cuz I had totally forgotten that thought!

And with that, dear readers, I suppose I’ll sum up the total of our thoughts and say that “Project X” is exactly what you’ve seen in the trailer and TV spots, so if you like that kind of humor, you should definitely see it in the theatre. Otherwise just Netflix it or skip it entirely!

Next Post: We will be seeing "Dr. Seuss' The Lorax" at some point this weekend, so be on the lookout for our review of that as well!
Posted by Andrew Keck at 10:42 PM