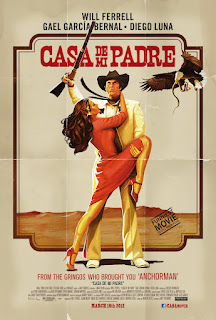 Directed By: Matt Piedmont (long-time writer on SNL and Funny or Die)

Rating: R for bloody violence, language, some sexual content and drug use

Synopsis: Armando Alvarez (Ferrell) is the youngest of two sons to a wealthy farmer in Mexico. One day, Armando's more successful brother Raul (Luna) returns home and brings two things with him: a beautiful woman, Sonia (Rodriguez), and trouble. Can Armando fight the feelings he has for his brother's fiancee? Can he save his brother from local druglord El Onza (Bernal)?

Andrew: Hello readers! Tonight…was a good night. Maybe not so much for the actual movie we saw tonight – Will Ferrell’s latest, Casa de mi Padre – but because of what we found out when we exited the theatre…which we’ll get to at the end.

But first! Casa de mi Padre – I personally had been looking forward to this movie for a little bit because I was interested to see what an all-Spanish-speaking film with Will Ferrell would be like. Sarah, what WAS it like?

Sarah: Well…it was Will Ferrell. If you didn’t know what you were going into (a Spanish Anchorman mixed with Talladega Nights) then you might be looking at the screen at the end going “what the…” But, I knew what I was getting into and I have to say…it was pretty bad. Like, not “Dios mio, que horrible!“ but just kind of “Wow, probably won’t be seeing that again.” What did you think?

A: Hmm. That’s a pretty fair assessment. I don’t think I would say it’s a mixture of Anchorman and Talladega Nights, but I will say that it’s totally in the vein of those two films by being extremely tongue-in-cheek, and while the humor isn’t consistent through the whole thing, it’s more like a series of skits.

Going in knowing that literally everything the filmmakers did on the screen was entirely on purpose, I actually think the movie is better than most would give it credit for. I liked that it had purposefully awful looking backgrounds, that the actors’ wardrobes would change in mid-scene; things like that had us laughing and that was its intended purpose.

S: Yes. Actually it was those things that had me laughing, not the dialogue. This movie was filled with little quirks that had us looking in every scene to see what was out of place or different from the last shot. The whole idea that the movie is a parody of telenovelas and other Telemundo programming, which makes it all that much better. I love movies where the actors make fun at their own expense. It shows good humor in Hollywood.

A: Exactly. I applaud the effort taken by all those involved to do the whole film in Spanish and with subtitles, I know it could not have been easy for the filmmakers and Ferrell, but they pulled it off.

Overall, we’d say that unless you’re a REALLY big fan of Will Ferrell, you probably don’t need to see this film at all in your lifetime. But it wouldn’t be the worst film to Netflix someday and check out if you’re interested.

NOW, ON TO MORE IMPORTANT MATTERS REGARDING WILL FERRELL!

As we were leaving the theatre tonight, Sarah checked our TwoTicketsFor… Twitter feed (follow us @TwoTicketsFor) and saw the news that Ferrell had gone on Conan today and announced, in character, that Paramount will be making a long-awaited sequel to Anchorman!!! Check out the video below!

2004’s Anchorman was a modest success at the box-office, making $90.5 million after only costing $26 million to make, but became ever more popular on DVD with the college and teenage crowd afterwards. A sequel has been up in the air for years now, especially considering how most of the supporting actors moved on to bigger things in their careers (Steve Carrell and Paul Rudd most notably) so it would have been tough to bring everyone back together with the same salaries.

But somehow, after all these years, it’s actually going to happen and Two Tickets For… couldn’t be happier! The original film is even listed on Andrew’s Top Ten Favorite Movies for crying out loud.

As we find out more about this developing story, we’ll make sure to bring you the news. As always, thanks for reading!

Video Courtesy of: Conan
Posted by Andrew Keck at 11:05 PM