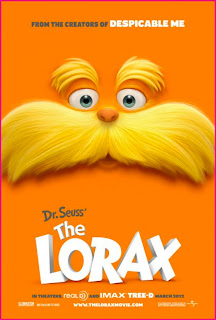 Synopsis: To impress the girl of his dreams, 12-year-old Ted (Efron) must track down The Once-ler – the only person in Thneedville who knows what happened to all the trees. Upon finding him, Ted is told the tale of The Once-ler and The Lorax, the guardian of the trees. Based on the classic tale by Dr. Seuss.

Sarah: Hi readers! So we saw "Dr. Seuss' The Lorax" this afternoon. Gotta say, I wasn't impressed. While it was a pretty movie and had some fun voice acting, it just tried to be too much like "Despicable Me." What did you think?

Andrew: If we wanted to summarize our thoughts of “The Lorax” then I think you did an excellent job. It LOOKED great; fantastic animation and it looked very much like a Dr. Seuss movie should. The voice acting done by Danny DeVito, Zac Efron and Ed Helms was very good, while the voice acting done by Taylor Swift, Betty White and Rob Riggle was just okay.

Overall, though, “The Lorax” was an uninspiring film to me. It had a VERY political vibe to in that it was all about industrialism, consumerism, pollution, the ecosystem, etc. and all of that was wrapped up in what they tried to make a cute film kids would love. It just didn’t work well for me.

S: So let’s talk about the propaganda. This story has always been about the killing of the trees and the way consumerism will eventually take over the world. It was very good depicting all of that, but it was kinda overkill. For a kid’s movie, it went over all of their heads. There were funny parts, sure, and it was cute at times with all of the little bears and walking fish, but I was still a little disappointed.

Along with all of this propaganda they tried to turn this movie into a Disney musical. What did you think about that?

A: Oh man, I hated it. Right from the start the movie opens with a musical number and it made me cringe. Then there were about four or five more just like it in the rest of the movie. I actually felt bad for Ed Helms because his Once-ler sings most of the songs, and I like Helms and he’s a very talented musician, but these songs were terrible. I’m sure the kids ate it up, and that’s clearly the demographic, but for any adults who will see this just be warned that the songs leave a lot to be desired.

I also think you nailed it on the head earlier when you said “The Lorax” was trying to hard to be like “Despicable Me.” Director Chris Renaud, who was co-director for “Despicable Me” and holds the same position for its sequel, tried too hard to make this just as cute and cuddly and it felt like a rip-off. The bears and fish were too much like the Minions in “Despicable Me” for my taste.

S: I agree. For a kid’s movie, the basics were all there; cute and some music. But for the adults that have to take the kids to see, it might be torturous.

I loved the original story from the book, but they changed a lot for the movie! In the book, The Once-ler is the bad guy, and he’s kinda creepy since all you see are those green arms. But in the movie? The villain part goes to this little man with a complex.

A: It’s been a loooooong time since I’ve seen 1970’s version of “The Lorax” or read the book, but I definitely did realize they changed the antagonist for this film. In this version the main bad guy is a little guy named Mr. O’Hare who’s become the richest man in Thneedville by selling people bottled air to combat the pollution. Somehow he’s taken over Thneedville and wants to keep Efron’s Ted from going out into the real world to talk to The Once-ler.

So with Mr. O’Hare as the bad guy, this film makes The Once-ler into one of the protagonists for the majority of the film despite the fact he’s obviously the one who killed all the trees. It’s not until late in the film do they make The Once-ler into the bad guy he is…and it’s with a musical number. Ugh. Wasn’t a fan of that part of the movie, but oh well.

So, for the final rating we will say this, if you have kids it’s a good way to kill an afternoon otherwise, skip it all together.
Our Score