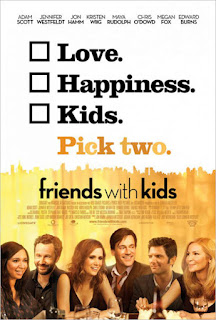 Starring: Jennifer Westfeldt, Adam Scott, Maya Rudolph, Chris O'Dowd, Kristin Wiig and Jon Hamm
Rating: R for sexual content and language
Synopsis: Jason and Julie (Scott and Westfeldt) are best friends who begin seeing all their married friends start having children. Deciding that they each want a kid of their own but don't want to deal with the work of a marriage yet, they have a baby and share custody while remaining platonic friends. But can it work?
REVIEW
Andrew: Hello readers! Yesterday we brought you our review of Disney's John Carter, and today we went in a bit of a different direction by seeing Friends With Kids - which is primarily a comedy but has good elements of romance and drama as well.
I think our synopsis up above explains the general premise of the movie pretty well, but we should also mention that a fair portion of the film involves Jason and Julie's married friends - Maya Rudolph and Alex O'Dowd as one couple with a relationship that is strong through thick and thin, and Kristin Wiig and Jon Hamm (Westfeldt's real-life husband) as a second couple who go through some marital problems.
Sarah, what are your thoughts on Friends With Kids? 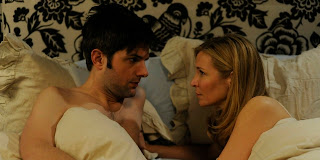 Sarah: I really liked it! It was just a fun movie that had us laughing at all of the married comedy moments and cringing when a husband said something really stupid, like every husband has done before him. It was just an incredibly real movie. The rough moments were so true to what actually happens and the comedy made light of what actually goes on in a marriage. I loved it. What did you think about it?
A: Friends With Kids pleasantly surprised me for all the reasons you just mentioned. I found it to be very genuine for the most part, with only a few notes ringing false (such as some use of foul language in unnecessary places).
I thought that the film was casted incredibly well. Adam Scott gave a great performance that balanced comedy and drama perfectly, Westfeldt was good in a role she wrote herself, and the four other actors that all starred in last year's Bridesmaids were aces. Edward Burns did well as a boyfriend Julie has, and Megan Fox actually did the best work I've seen out of her as a girlfriend Jason has.
What did you think of the actors?
S: Loved the casting. I don't think it was the best use of Kristen Wiig but this movie wasn't all about her. I love Maya Rudolph and am so excited to see her in more roles. She just makes me laugh all the time. If you haven't seen her on NBC’s Up All Night, you are missing out. Hamm does a great job playing kind of a jerk, and we are extremely excited to see him back in his best role as Don Draper on Mad Men in two weeks. 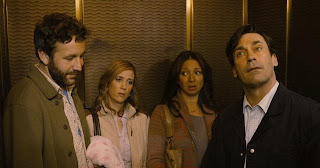 Now while we did really like this movie, it was fairly predictable. If you see the trailer, you pretty much are going to know how it ends. Isn't that what you thought, Andrew?
A: Yeah, when you read the premise of the movie I think it's immediately obvious where the movie will end up. But in that case, it's more about how well the filmmakers get to that point and if they do anything that you haven't seen before. There isn't a whole lot in this film that you probably haven't seen before, but I do think Westfeldt did a great job of showing true depictions of relationships, marriages and what it's like to have kids. There's one scene in particular, where all the main characters go skiing in Vermont, that is incredibly well done by all involved.
S: I agree. The relationships are actually all really well developed. Even the lesser relationships (Fox and Scott; Westfeldt and Burns) were well developed. Each character had their role well defined. That is impressive especially since their characters were not on screen for all that long.
I also felt that the actors, script and directing did a great job making the friendships between all the main characters feel real. I felt like we were watching six real friends who were having these real relationship problems.
A: Completely agreed. I also want to point out that I found the chemistry between Scott and Westfeldt was top-notch, I truly felt that they had been best friends for twenty years. I also liked how genuine the relationship between them and the child actor who played their one-year-old son was. I wonder if that baby was Westfeldt's actual son, but I can't find anything about that online so far.
Ok, so then overall what would our final word on Friends With Kids be?
S: While we loved the movie, we say you can probably just Netflix it!