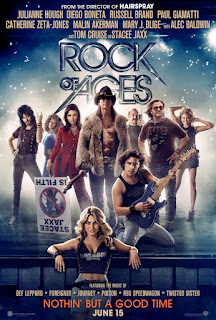 Synopsis: Set in 1987, Sherrie (Hough) is a bright-eyed young singer who leaves Oklahoma for the bright lights of Hollywood. When she arrives she meets Drew, a bartender at the popular nightclub The Bourbon Room, who's also an aspiring rocker. When the wife of LA's mayor (Zeta-Jones) makes it her mission to shut down The Bourbon Room, it comes down to a big show my the famous but temperamental rocker Stacee Jaxx (Cruise) to save the place. Instead he ends up turning everyone's lives upside down.

Andrew: Hello readers! Sarah and I just got out of seeing this weekend’s new musical, the film adaptation of the Broadway hit Rock of Ages starring Tom Cruise (Mission: Impossible – Ghost Protocol), Julianne Hough (Footloose) and many more famous actors with various ranges of singing prowess that we’ll touch on later.

Sarah, first things first, what are your immediate thoughts on Rock of Ages?

Sarah: It was AWESOME. I mean it was pure rock and roll. This is a Broadway musical that has been adapted to film, something that’s been done many times before and will be done many times in the future, but this movie ROCKED. I was really nervous about how good it would be, but it kicked ass.

A: I could not agree more with you. And I’ll say this: it’s not a perfect movie by any stretch of the imagination, but it is just a FUN movie. I can’t even articulate how much I enjoyed this film. I love 80s music to begin with, but every aspect of this film related to the 80s, I’d have to imagine they made it perfectly. This was obviously a passion project by those who made it because it LOOKED and SOUNDED perfect. I had a smile on my face, literally, from beginning to end.

S: Yeah, it was awesome. Now let’s get into how the actors fared. I was a little concerned that this had such a huge cast with so many big names.

A: But they fared well, right? So let’s pick out a couple of the songs and actors and talk about the best, and then the worst if there were any.

First and foremost, the best performance, hands down, was Tom Cruise as Stacee Jaxx.

A: I can’t even pick which song I think he did best. I think if I had to choose I would say it was his rendition of “Wanted Dead or Alive.”

S: Yes! What was crazy for me was that when he sang that song, as a woman, I felt what it would be like to have been around when rockers were considered gods by women. When women would just throw their bras and underwear on stage at these guys, cuz they were SEX ICONS. He OOZED sex in this film!

A: And he slinked around so perfectly and he just embodied a man who’s seen a million faces and rocked them all. I think it helpful that he actually went through all that crap he went through when he had his downfall, and now he’s resurrected his career because you could see that experience in his performance.

S: What’s crazy is it was like watching Steven Tyler, Brett Michaels or Axl Rose, just these guys that were considered icons of their age. And yeah, I would have to say that not only was Tom Cruise perfect in this role, but he can make no wrong decisions in his career right now. I don’t know who is managing him but he cannot make a wrong decision.

A: Ever since his cameo in Tropic Thunder…

S: He’s been on fire! Untouchable. Ok, so the other songs…

A: There were so many good songs. And it’s tough to pick only a few out, cuz off the top of my head they did “Jukebox Hero”, “Sister Christian”, “Pour Some Sugar on Me”…

S: “Paradise City”, “Wanted Dead or Alive”, “I Want to Know What Love Is”… but let’s be honest, the “We Built This City” and “We’re Not Going to Take It” mash-up was the pinnacle of the movie. Everything had built up to this part.

A: I think it was a good part, but everything actually built up to the final song. I don’t even want to say what it is so as not to spoil it, I thought it was so perfect.

S: I was surprised! Were you surprised by the song choice for the finale?

A: A little bit but I’m glad they did because it’s one of our all-time favorite songs.

S: It’s one of the most ICONIC songs in all of music history.

A: Exactly, and that’s why I think it’s perfect. I like that they ended it the way they did. But let’s go back to the actors - Julianne Hough did a great job…

S: Diego Boneta, which was a breakout role for him, did really well.

A: His look kind of bothered me a bit, like he looks really too fresh faced for me. But any scene that he was singing in and really rocking out he was perfect. Russell Brand’s (Get Him to the Greek) not bad, not great but not bad; Malin Akerman (The Proposal) was pretty good in the song she did with Cruise.

S: Mary J. Blige was great obviously, but she didn’t have much to do.

A: And they did do a really cool rendition of “Any Way You Want It” by Journey. Just in general, this film is exactly what I thought it should be. It was a straight-up musical and it made me smile from start to finish. But I also enjoyed it because, and I’ve said this many times before to my friends, I think it would be awesome if people actually did just burst into song in real life situations.

S: Oh I tweeted as soon as we left that I wish life was a musical.

A: Because that’s what they did well with this one, they didn’t just stage songs but they told the story through the songs. That was the strength of the film. Like if we were going to grade this on a normal scale, it’s not a 5 out of 5, it’s not perfect. It’s a little long…

S: But it is a musical. There were definite acts, there was an intermission type feel to it with a first act and a second act. It was adapted well from the stage to the screen and I think the music had a lot to do with that. There were times where it got really slow, but again that’s a show. That’s a Broadway show for you. I would have to say that they’ve gotten a lot better transitioning theatre shows to the screen. They’re not cutting things out, they’re not making it tighter, and they’re staying true to the story.

A: I was okay with the two hour run time because I feel like that’s what the actual show is. And you have to get all the songs in there.

S: And they did have to end up cutting some songs out!

A: The director, Adam Shankman, who directed Hairspray a few years back, did a great job and I think this is actually better.

S: Everyone just had fun! We hope it does well this weekend because it was awesome. I would have to say that if you’re a fan of the musical genre, if you’re a fan of the 80s, this is definitely one you have to see in theatres. And not because it’s any better in theatres than it would be on your TV, but just the sheer spectacle of it. You gotta rock out to it. I wish it had been louder.

A: And again, I can’t stress this enough, see this because of Tom Cruise. Yeah he’s crazy, but you can’t deny that the man gives it his all. From being on the outside of the Burj Khalifa in Mission: Impossible – Ghost Protocol to just giving it his all as a rock star in this.

What’s our final grade for Rock of Ages?

S: It’s not a five out of five, but we’re buying this. We’ll own it. And I think it’s one of the few that we’ve given that level to!