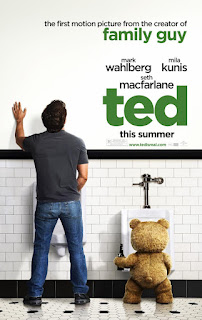 Rating: R for crude and sexual content, pervasive language and some drug use

Synopsis: When 8-year-old John Bennett gets a teddy bear for Christmas one year, he names him Teddy and wishes he were alive so they can be friends forever. Magically he gets his wish and 27 years later they’re still best buds, but John (Wahlberg) and Ted’s (voiced by MacFarlane) lazy and dependent lifestyle is ticking off John’s long-time girlfriend, Lori. How will John be able to balance his two relationships without losing either one?

Andrew: Hello readers! Sarah and I just got out of a advance screening of Seth MacFarlane’s feature film directorial debut Ted starring Mark Wahlberg (The Departed), Mila Kunis (Friends With Benefits) and MacFarlane himself as the voice of the titular teddy bear.

Sarah, we haven’t had a chance to preview this film on our site because it doesn’t go wide until this weekend, but this is one we’ve DEFINITELY been looking forward to ever since we saw the first trailer. Now that we’ve seen it, what do you think?

Sarah: It was awesome! It was hilarious. It was a laugh-a-minute movie – if it wasn’t always a big belly laugh it was chuckles all the time. I loved it.

A: I’m not quite sure if this is the funniest film we’ve seen this year, because 21 Jump Street was pretty freaking funny, but it might have topped it. This is your classic MacFarlane humor. There’s a fair amount of topical humor, and only a couple of his signature cutaway jokes that he gets criticized for (which are pretty damn funny in this film), but it’s very raunchy and it’s certainly offensive. No one is off-limits here.

This is going to be one whereas 21 Jump Street was funny but not very quotable, this one is going to be VERY quotable. It’s more in line with Anchorman, Wedding Crashers, those kinds of films.

A: There are just a lot of great one-liners and it’s just a dirty, raunchy movie with a lot of those dirty jokes coming out of a walking, talking teddy bear. You’d think the gimmick would get old pretty fast but it doesn’t. And again, I have to stress that while there’s a lot of offensive jokes (a few that even made me say, “Wow,”), MacFarlane is an equal-opportunity offender.

S: Right off the bat there’s a joke about Christmas and Jews.

A: Yeah, so right from the get-go you get an idea of what kind of movie this is going to be.

S: So you either accept it from the beginning or you won’t. They’re not trying to be discrete here. I was actually surprised they didn’t pull any blatant, stars-of-today jokes. They only did a couple, one at the beginning and one at the end.

A: There are a lot of older references, which is another trademark of MacFarlane, some of which I think some people won’t get. I love that the 1980 film Flash Gordon is quite a big part of the film, actually. I loved it because my favorite band of all-time, Queen, did the soundtrack for that film and they use a lot of those songs in Ted.

So Ted, the character, was incredibly funny. MacFarlane was pitch-perfect voicing the animated toy. Yes, he sounded a lot like Peter Griffin…

S: Which they do make a reference to!

A: But I’m wondering how you felt Wahlberg and Kunis did having to act against a CGI character?

S: I thought they did a great job, not only against a CGI character but with the comedic humor MacFarlane has. They both have comedic chops…

A: And Mila is kind of the straight-man in the film…

S: She is, but she does have her moments, too. And she GETS it.

A: And I think that comes from being a MacFarlane regular as the voice of Meg on Family Guy. Which reminds me, I kept thinking during the film about how there’s a running gag on Family Guy that Meg gets the short-end of the stick (especially in the Family Guy Star Wars episodes, she’s barely in them) but I think Seth made it up to her.

S: She got a starring role in his film, so yeah, he made it up to her. And you know what? I had completely forgot she was in Family Guy.

But here’s the thing, and I want to get your opinion on this – I felt a lot of the time that we were watching a live-action Family Guy episode, with how the jokes were delivered. Obviously that’s MacFarlane’s style, it’s what you come to expect from anything he touches, and I’m sure it didn’t bother you but do you think it might bother some others? What would you say to people who say, “It’s just a live-action Family Guy with a talking teddy bear instead of Peter?”

A: If anyone complains about that I would say, “What did you expect?” They’re not hiding it. It’s FROM the creator of Family Guy, he sounds like Peter Griffin, obviously Seth has a certain kind of humor and it’s successful. That’s why he has three shows.

So yes, at times it may have felt like a live-action Family Guy, but it’s not. There ARE elements – from the comedic styling of MacFarlane, but…like let’s take a look at Ted. Yes he sounds like Peter, but he’s NOT Peter. He’s not stupid, he’s smart. Peter can be mean a lot in the show, Ted isn’t in the slightest. He loves John and he just wants to make things right.

So I think that leads to a big point in this movie: if you DON’T like the show Family Guy, this isn’t the movie for you. But if you love the show or you’re even just a casual fan where you catch a part of it on TBS or something, laughed and then changed the channel, you’ll find a lot of things funny here.

S: I loved the situational humor. It’s smart, clever and it’s just fun the entire time. There are many times my jaw dropped because I couldn’t believe what was just said or done.

A: This is the film The Dictator wanted to be.

A: A lot of similar types of jokes they’re going for, but those jokes work here.

S: Same with That’s My Boy.

A: Yes, this is what those two films were trying to be and failed at. Ted has heart, it’s genuinely funny, and you don’t go into this looking for a deep, meaningful story. There’s a boy and girl who have a conflict over the bear, yes. But there’s also a subplot involving Giovanni Ribisi (Avatar), as a guy who wants to buy Ted from John, that I found added a bit to the film.

S: Because it turned it dark!

A: Yeah, and I found it unexpected going into the movie. And during the course of the movie I forgot about him, so when he came back into play it worked on two levels for me.

S: It’s one of those conflicts that happens in the film but didn’t even give a hint about in the trailer. From the trailer you expect the film to be just a conflict between the girl and the bear…

A: There’s just more to the movie than we expected, which was good.

S: And it was just a fun movie. This was one where the whole audience laughed together. There were no points when it was just us laughing, like with Dark Shadows. The whole theatre enjoyed it.

If you have children and saw the trailer and thought your kids would love to see it, NO. It’s VERY raunchy. Don’t let the cute, cuddly teddy bear fool you.

A: A couple of other quick points: there were some great cameos…

S: FANTASTIC cameos. And there are cast members from Family Guy …

A: Yep, Patrick Warburton and Alex Borstein were in it, so it was cool MacFarlane threw them in there.

S: Patrick Stewart was the narrator and darn near steals the beginning of the movie.

A: And I loved the music, because it was a lot of symphony stuff like Seth uses for his shows, and the animation for Ted was amazing. He looked incredibly real and fit right in with the real world actors and surroundings. It helped the impact of the film so much I can’t even explain it.

S: Real quick, something I loved about these actors being in it is that there is this group of actors who have surrounded MacFarlane and recognized that he just wants to make people laugh. Yes, maybe his style is simpler than the South Park guys because it’s more relatable to everyone. They make fun of everyone in a way you don’t have to think too hard about.

A: And for any MacFarlane critics, there are absolutely no political overtones or jokes in the film. There are jokes about 9/11 but they’re not political. So there’s none of his left-wing stuff or atheistic stuff, so don’t worry about that.

So we loved, and just in general, if you love or like Family Guy, you’ll enjoy Ted.

S: We hope that you guys see it this weekend because it’s a lot of fun.

A: I can guarantee that we’ll be buying this the first day it comes out.