Lips Red as Rose, A Queen Black as Night: Our Review of "Snow White and the Huntsman" (2012) 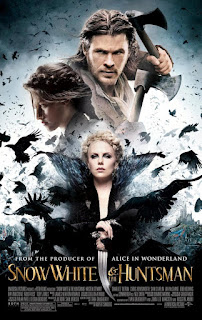 Rating: PG-13 for intense sequences of action and violence, and brief sensuality

Synopsis: A revisionist take on the classic story of Snow White, the evil Queen Ravenna (Theron) must consume Snow White's (Stewart) heart so as to remain the fairest in the land. But Snow White manages to escape before her execution, so Ravenna hires The Huntsman (Hemsworth) to track her down in the Dark Forest.

Andrew: Hello readers! This afternoon Sarah and I saw the only big release that came out this weekend, Snow White and the Huntsman, starring Kristen Stewart (Twilight), Chris Hemsworth (Thor) and Charlize Theron (Young Adult).

We spoke about this film in our weekly preview a few days ago, and again, it was really the only film we talked about. We were both pretty excited for this film, so now that we’ve seen it Sarah, what are your thoughts on Snow White and the Huntsman?

Sarah: It was awesome. It was exactly what I wanted it to be. It was dark, it was intense, it had elements of magic, it was a great reimagining of the classic Snow White fairytale. It is a FAR cry from the Disney princess movie. Snow White is powerful and strong in this one, she’s not just another Disney princess.

Honestly I loved it. Charlize Theron as Ravenna is amazing! I mean, I’m gonna throw this out now but I’m thinking maybe an Oscar nod for this role. We’ll see, but she was pretty amazing.

What did you think about it?

A: I’m just a little bit below your enthusiasm for it. I liked it a lot but I didn’t love it. There are times I felt it was a little slow, but overall I loved the atmosphere of it, the look of it, the settings, the darkness, the costumes. The actors all fit in pretty well, particularly Theron and Hemsworth, and the dwarves. I feel like the dwarves were a little underused. They came in a little too late for my liking.

S: I would agree with you on that.

A: But overall I liked it. And I did NOT have a problem with that fact that it felt like a completely different movie at the end. It really started off as a fantastical movie, got dark, moved back towards a fantastical movie, but there were action pieces throughout that I really liked and then it finally ended with the big battle. I feel like it all built up to that finale rather well.

I will say, and I want your thoughts on it, the transformation that Snow White makes – I know a lot of critics I’ve been reading have said how silly or stupid it seems that “Oh, Snow White escapes and she knows how to ride a horse and use a sword?” Others think there are lapses in logic I guess. I didn’t have a problem with it, did you?

S: I will say that when she hops on the horse as she escapes I was like, “Wait a minute, hasn’t she been locked in a tower since she was a little girl?” But you have to think that before she was locked away she was a princess and that was something she would’ve been taught to do.

There’s a little bit of disbelief in those parts but I got past it. I have to give Kristen Stewart props! I was a little nervous at first that she was going to be Bella Swan playing Snow White, but she did a better job than I thought she would! She showed more strength than she ever has as Bella, and I think it’s a shame she’ll be compared to Bella for the rest of her career, but I think she did a great job.

I also like the twist with the Huntsman taking a center role, and with the prince being a little more rough-and-tumble instead of just being Prince Charming. I really liked that change.

What did you think about this film’s interpretation of the poisoned apple?

A: I liked it! It was actually until we saw the apple that I knew what was going on, but I liked the interpretation. It fit in with the rest of the movie.

S: In the original, let’s be honest, Snow White seems a bit stupid to accept an apple from a strange old woman. But in this interpretation it’s very believable.

Now, you mentioned Theron and Stewart, but what did you think of Hemsworth’s performance?

S: I’m a little torn on Hemsworth. I thought he did well. I think he himself did well as this broken man that’s kind of been thrown into this task of protecting Snow White. I don’t think they used him to his full potential. He’s the third main character, but I felt at times that they tried to nudge him out of the picture. Especially when Snow White’s childhood friend William comes back into the picture. I understand why they do that but I think they nudge the Huntsman out a bit and he really just becomes a protector. I was a little unhappy with how they ended his character arc. I don’t feel they developed his character enough. What do you think?

A: I actually disagree with your last statement. I think that they did develop him pretty well. He’s introduced as a drunkard, it’s obvious he doesn’t have anything left to fight for because the queen gets him to find Snow White for her by offering to use her powers to bring his dead wife back. Right off that bat we see what he’s become, we find out why he became that way, and through the course of the movie we see a man who starts to find a purpose in protecting Snow White. We eventually find out how his wife died, which feeds into the story and I felt worked organically, and then I think he has a great scene in the last act that is probably my favorite part of the movie.

S: I feel like I wanted more of that story. I understand it wasn’t focused on that and if they do a second one they might…

A: And I’m sure they will. But I see where you’re coming from at the very end of the film, that I’ll give you, but as far as his actual character arc I liked it. I felt he gave a good performance. His accent fluctuates a little bit between his Thor accent and a Scottish accent, but I’m fine with that. He didn’t come off as Australian or American, so it was fine for me.

S: You mentioned this earlier about the dwarves, and I agree, they’re totally underutilized. I understand that it’s not their story, but I think they way they DID the dwarves was amazing. These are normal-sized actors and the way they turned them into the dwarves was genius. I don’t know how they did it. They don’t do it the way Peter Jackson turned John Rhys-Davies into a dwarf in Lord of the Rings, at least I don’t think so. They might have used scale-doubles at some points, but I don’t think so. I’d be very interested to see how they made the dwarves.

And the characters are great. While they’re not based on the traditional Disney dwarves, there are elements of those characters that I liked that they put in there. And there’s a little bit of a twist with the dwarves, I wasn’t expecting some of the things that happens with them. They’re not these bumbling fools, they respect and honor Snow White. It was very cool.

S: Strongest part was Theron’s performance as Queen Ravenna. She was the strongest part acting-wise. She EMBODIED evil, put you do pity her a bit, and I think that ‘s what brought the human element. You hate her and she’s a terrible person but you do feel pity for her.

A: For my strongest part, I’d also say Theron’s performance. She chewed the scenary and for what her character is supposed to be I liked that.  I loved how she used her eyes. You could see a fire burning there.

Weakest part? Honestly I didn’t feel a purpose or need for William. Because I feel like it could have just been the Huntsman. I know it’s Snow White and you have to have a prince in there, and while I like the take they have on him, they brought him in and made a triangle…and Snow White didn’t really have a connection with him.

S: You’re right, and there should have been. But I’m wondering if that’s more on the actors than on the writing. I think there were scenes where it’s tender between the two of them, but I didn’t believe it. While I do think his character was needed, it was not portrayed correctly. There had to be chemistry. You felt chemistry between Stewwart and Hemsworth, but yeah, not so much between her and William.

A: Ok, so overall final thought on Snow White and the Huntsman?

S: You have to see this one on the big screen.

S: Oh yeah, it’s one of the season’s most anticipated blockbusters (at least for me), so yeah, you gotta see this one. I loved it on the big screen.

A: I’ll agree it looks great on the big screen but I’ll say I don’t think it’s a must-buy for us.

S: I don’t know, this might be an interesting one, it might be one where we differ.
Photo Courtesies: Filmofilia, Forbes, Beauty High, Collider
Posted by Two Tickets For... at 6:06 PM