When the Zoo Animals Met the Circus Animals: Our Review of "Madagascar 3: Europe's Most Wanted" (2012) 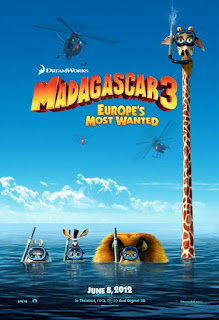 Synopsis: The gang’s all back – Alex the Lion (Stiller), Marty the Zebra (Rock), Gloria the Hippo (Smith) and Melman the Giraffe (Schwimmer) – and they’re headed to Monte Carlo to find the Penguins and go back to New York City. After scaring a casino full of humans, Animal Control Captain DuBois (McDormand) makes it her quest to capture Alex so she can mount his head on her wall. The gang joins a European circus in an attempt to evade DuBois and get home, becoming friends with Gia the Jaguar (Chastain), Vitaly the Tiger (Cranston) and Stefano the Sea Lion (Short).

Andrew: Hello readers! This afternoon Sarah and I made our usual excursion to the movie theatre down the street and caught a matinee showing of Madagascar 3: Europe’s MostWanted.

Sarah, we previewed this film on Thursday along with Prometheus, and we were both excited to see it, you probably a little more so because you have a special love for one of the Madagascar films, correct?

Sarah: Yes, the first one is 100% my favorite of the series. I screened it for my younger sister before she could watch it back when it first came out, and I remember sitting in my basement all by myself laughing my head off. So it will always be my favorite.

But I have to say, this new entry in the series is pretty darn funny and the 3D is amazing!

A: I would say I like the first two movies, but of the three I think I like this one the most. I found myself laughing more during this one for a variety of reasons, but I think the addition of Martin Short as the Italian circus sea lion, Stefano, is one of the biggest reasons. He was pretty hysterical – and not just in making me laugh, but literally his character is hysterical a number of times. The penguins, per usual, were also great. I love me the penguins especially Skipper.

And yes, the 3D was absolutely fantastic. Along with Prometheus, the strength of both movies this weekend has been that they’ve been incredible examples of what GOOD 3D can do for a movie.

S: Agreed. You know, what I think makes these movies so funny is that you not only have your slapstick humor for the kids, but you also have adult humor for the parents

A: Let’s be honest, it’s funny but it’s a silly funny.

S: Yes. The penguins, yet again, were humorous and are really the cherry on top of this movie. Their quick little remarks you have to pay attention to because otherwise you’ll miss the humor in them are really some of my favorite parts. I think the ensemble cast, especially with the addition of Martin Short, Jessica Chastain and Bryan Cranston really were good additions for people whom you don’t normally see as voice actors. They did a good job.

A: It’s not like these are intellectually humorous, you don’t have to think about it much. It’s a lot of slapstick, a lot of physical humor, which is fine. It makes us laugh, which is par for the course. But I think what a good animated film has to do is have heart and all three Madagascar films have really had their own heart.

This was a good one because it shows that the characters wanted to go home to NYC, but maybe home wasn’t exactly what they thought it was now that they’ve seen the rest of the world. Plus they have other people that they care about or care about them, these circus animals that they become a part of, so it’s harder to just go back to the Central Park Zoo.

S: Yeah, in the second one they kind of go back to their roots, get to see where they come from, but it’s still not quite them because they’re used to performing in front of people. And the circus in this one allows them to do that again.

Overall, Madagascar 3 Is funny and I really did enjoy it. Seriously, the 3D is amazing. If you’re going to see this in theatres, see it in 3D because there’s a circus scene that just blew my mind. It was like a Cirque de Soleil on the screen. It was really cool.

A: This movie is a visual feast. It’s really worth the extra dollars to see it in 3D. I’m sure it’s fine in 2D and is just as funny, but it won’t LOOK as stunning. Ok, real quick, I was also a fan of the little English dogs that turn out to be like English gangsters. They were funny. But I was not a big fan of Frances McDormand’s character, Captain Chantel DuBois. It’s not her fault, I thought she did fine voice acting but…

S: She didn’t add a ton to the story.

A: Exactly. Obviously she was the conflict that the film needed, but it wasn’t much. She made me laugh a few times, or the people that encountered her made me laugh I should say.

I also liked the music, I was a big fan of the French music they use, including one song by Edith Piaf that DuBois actually sings. I recognized it as the song the characters in Christopher Nolan’s Inception use as the kick to wake them up from the dreams, and using Journey’s “Any Way You Want It” was kind of random but I love Journey so I was okay with it.

S: Yeah, I loved Katy Perry’s “Firework” for the circus scene. The music was fun and kept the movie upbeat.

Madagascar 3 is definitely one to take the kids to see, or maybe for a light date. Whereas Prometheus was the dark, adult movie to come out this weekend, this one is just pure fun and I definitely think they’ve hit the nail on the head yet again.

A: Will we own this one? We don’t own any of the others.

S: We don’t, but it will definitely be one that family members will own it and we’ll watch it.

A: And of course, as we said earlier, definitely see it on the big screen and see it in 3D! As always, thanks for reading!