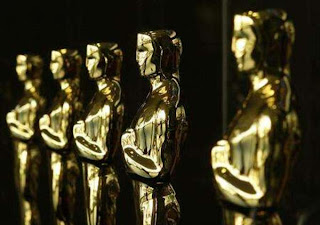 Andrew: Hello readers! As you may or may not know, Sarah and I are celebrating the upcoming 85th Academy Awards this week by posting our analysis and predictions of various categories. Yesterday we kicked things off by covering the Best Animated Feature, Best Original Song and Best VisualEffects categories, and today we are going to discuss the two screenplay categories and the Best Director category. So without further ado…

The nominees for Best Original Screenplay are:

A: At first glance this appears to me to be a relatively competitive category, and one that we’re relatively familiar with since we saw all of these films except for Amour, but I personally think it comes down to two candidates for the prize. Can you guess which ones I’m thinking of?

Sarah: Yes, and I’m going to go with Zero Dark Thirty and Django Unchained being the two front-runners you’re thinking of. This isn’t just because they are two of the films nominated for Best Picture, but I think they were also the two movies that were best received in this category.

Django Unchained was a beautifully mastered movie that captured the feel of the past with the relevance to the present. The way that the characters relate to one another through the dialogue is so modern while still dealing with the issues of a 1800s United States. It wasn’t pretentious and I appreciated that. There were also so many lines that were quote worthy and that really stuck with you, and I think that is a mark of a great screenplay.

Zero Dark Thirty, on the other hand, was gritty and raw and Mark Boal did a great job of writing a screenplay that embodies the vision of Kathryn Bigelow. It was a story that the whole world wanted to know more about and the fact that he was able to write such a treatment that enabled her to put it on the big screen in such an effective way was pretty impressive.

A: Absolutely. The screenplays for Django Unchained and Zero Dark Thirty, to me, stand heads and tails above the other two films in this category that we actually saw. It’s not to say that Moonrise Kingdom and Flight didn’t have great screenplays, because with the comedy and the speech patterns that Wes Anderson has become famous for, Moonrise Kingdom certainly has it’s fans; and Flight was a script that took a long time to finally be made and gave Denzel Washington a fantastic character to play, but they just aren’t as memorable to me as Django and Zero Dark Thirty.

Tarantino is a master as writing dialogue and after writing a number of classic films with tons of memorable moments, Django might be his best because of the topics he touches on, the relationship between Jamie Foxx’s Django and Christoph Waltz’s Dr. King Schultz, plus the unforgettable characters in Leonardo DiCaprio’s Calvin Candie and Samuel L. Jackson’s house slave, Stephen.

And then I couldn’t have said it better in regards to Zero Dark Thirty. It’s a subject that Boal was able to get inside help with, it’s incredibly detailed and it gives Bigelow and Jessica Chastain some great stuff to work with in conveying the man hunt for Osama bin Laden.

We can’t really speak much about Amour because we haven’t seen it, but I really do think it’s down to these two. So which one do you think will win?

S: I really would like to say that Django takes this one home, but I think it will go to Zero Dark Thirty. The intensity of the story and controversy that surround this movie and the story I think gives it the intrigue that it needs to take home the Oscar. I would love to be proven wrong though, it could be a total toss-up!

A:  I’m going to go with the other film then and predict that Django Unchained will win Quentin Tarantino his first Academy Award since he won for Pulp Fiction in 1995. He’s already won the Golden Globe and the BAFTA award for the same category and I think that’ll carry over to the Academy’s voting bloc, too.

The nominees for Best Adapted Screenplay are:

A: In my humble opinion, this screenplay category is far more competitive than the other one. Every single one of these screenplays has a legitimate claim to the award and I wouldn’t be surprised by any of them winning. Ok, maybe I’d be surprised if Beasts of the Southern Wild won, but that’s only because we hated that film.

Here’s how I see the Best Adapted Screenplay category breaking down: Argo is the front-runner because Argo has been winning EVERYTHING. But at the same time, there are at least three other films that can challenge Argo because the films themselves have very ardent supporters (for good reason) and those are Life of Pi, Silver Linings Playbook and Lincoln. How do you see this category?

S: I think that this might be the toughest category in the whole show! I mean, we are dealing with some beautifully adapted stories. Yes, even Life of Pi was pretty incredible. It was supposed to be the book that couldn't be put to film and yet they did it! I want to say that Argo is the one to take home that Oscar but I think that it will be a fight to the finish. I think Silver Linings Playbook will be the one that gives it the biggest run, but Argo was just so good! The story was so intense even though we knew how it would end. The dialogue and general way in which the characters interact is pretty genius. Delivery of the great script was truly key in this movie.

A: What you just said about Life of Pi supposedly being an unfilmable book is why I think it has a shot at winning. There's not a ton of dialogue outside of the narration by an adult Pi, and the screenplay probably had to be incredibly descriptive so they knew exactly what to film. But Silver Linings Playbook is the opposite spectrum of that - it's very dialogue driven, it's quick-witted and very emotional. There's a reason the film has a lot of fans in the Academy. And then I add Lincoln in there because it's a very sharp, time-period script that a lot of people on the older spectrum ate up, but I think it's a little TOO heavy at times. Argo is that perfect medium, which is why I think it's going to win.

S: Yeah, I'm going to go with Argo as well. It really was probably the only movie this year that had me on the edge of my seat from beginning to end, which is saying something. And the lines it gave Alan Arkin and John Goodman are too funny!

The nominees for Best Director are:

A: Another tough category where most of the nominees don't fall under "just happy to be nominated." In fact, the Best Director category is so tough this year that not one, not two, but THREE totally deserving directors got left out completely in Ben Affleck, Kathryn Bigelow and Quentin Tarantino.

S: Yeah I'm a little disappointed that those three are left out. To me, that really only leaves Spielberg as a clear shot at winning this Oscar. While I think that he will win, I don't think that he should. Lincoln was one of the most boring movies that I have seen in a while. But I do think that through his direction, Day-Lewis, Field and Jones were able to give Oscar-worthy performances and that's worth something.

A: I totally understand the thought process behind Spielberg being the presumptive front-runner - he's Steve Spielberg, he directed a top-notch cast to some great performances in a historical drama and the film just looks great. Plus it doesn't hurt that the guy who won the Golden Globe, the BAFTA and the Directors Guild Award in this category (plus the SAG and Producers Guild equivalent) wasn't even nominated.

But I actually do think Ang Lee and David O. Russell could give Spielberg a run for his money. Like we just said, Life of Pi was supposed to be unfilmable and Lee did a marvelous job bringing the story to life, plus it was one of the best uses of 3D in film-making yet. And David O. Russell directed a phenomenal cast in his own right, to the point that his film got a nomination for all four acting categories. Who would have thought Bradley Cooper would ever have a chance to win an Oscar (in any other year that is)?

S: Yeah this is a killer competition! I'm going to go with Spielberg though. He has the best pedigree in the running. And with the three who I think most deserved to be in this category not in it, I think he is the only one that we can safely go with. I'm just disappointed in this group (I know I said this already). It's arguably one of the biggest awards of the night and three extremely talented directors got the shaft.

A: Reluctantly I'll agree that I think Spielberg is going to win the award, but I also want to make it clear that I don't think he should win, and that Russell should win instead. Actually, Affleck should win, but...you know.

A: Oh! And for the second straight year we're going to be LIVE-BLOGGING the Oscars! We know you're going to be following our predictions up until the weekend, but don't forget to come back on Sunday night when Sarah and I (and maybe a guest or two) will be live-blogging while the show is airing, giving our running commentary and reaction to the night's winners!
Posted by Two Tickets For... at 11:19 AM