Around the Web: "Anchorman 2" casting, a new Star Wars film, a Marvel scoop, and more!

Andrew: Hello readers! So first, let us apologize for being so quiet around here lately. Whether it's the winter blues getting to us, the craziness of our day jobs keeping us from getting to the theatre...

Sarah:  Or because we've lately been preoccupied with me trying to get Andrew caught up on Downton Abbey from the beginning!

A: But we've been slacking on the blog and for that we apologize, and we promise to kick it back into gear as we ramp it up to our LIVE BLOGGING of the 85th Academy Awards on February 24th!

We'll be posting more regularly the rest of the month, with new reviews (we're seeing Warm Bodies tonight), fresh columns, analysis of the upcoming Oscars, and some new stuff like THIS particular post.

This post, the first edition of something we're tentatively calling Around the Web, is going to be a weekly post where we share movie or television news and fun tidbits we've seen around the interwebs, as well as stand-out material from our fellow bloggers. We hope to make this a nice round-up of stuff you may or may not have already seen. So let's kick it off with some big movie news that has hit the net recently!


WHO'S JOINING THE ANCHORMAN 2 CAST?

A: We all know that the long-awaited sequel to the modern classic Anchorman: The Legend of Ron Burgundy will finally be hitting theatres later this year, but until recently we didn't know who all was returning or joining. But as Screen Crush points out, earlier this morning Anchorman 2 director/co-writer Adam McKay announced the former SNL funny-woman and Bridesmaids star Kristin Wiig will be joining the crew!


But wait, there's more! Not only is Wiig joining the cast, but Christina Applegate also tweeted this morning to welcome Wiig to the cast, thereby confirming her involvement with the movie, too!


So excited Kristen Wiig has joined our cast for anchorman2. Going 2 b best movie ever made. Besides the best movies ever made.
— christina applegate (@1capplegate) February 5, 2013


Applegate had previously been a soft-commit to the film whereas the male members of the Channel 4 News Team were all a go, so now we have it officially confirmed that Veronica Corningstone will in fact be back!


WHICH STAR WARS CHARACTER IS GETTING THE FIRST STAND-ALONE FILM?

A: Disney has been making all sorts of news the last couple of months ever since their acquisition of the Star Wars franchise when they purchased Lucasfilm, Inc. from George Lucas the day before Halloween last year. That was a big one, then recently they announced that J.J. Abrams will be directing Star Wars: Episode VII, and now Harry Knowles of Ain't It Cool News broke an exclusive scoop today about which beloved character will be the focus of the first stand alone Star Wars film Disney will be making. And that character will be... 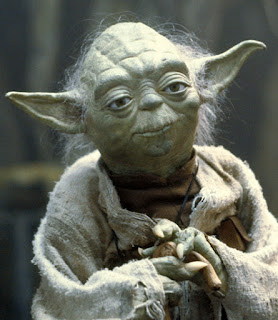 "The first Stand Alone film is going to center upon YODA.  At this stage specifics are sparse, but Kathleen Kennedy is putting together a STAR WARS slate...  I'm wildly curious for more details on the YODA film - would this be a young or old YODA tale?"

Knowles also says that Disney has scrapped their plans to make a new section of Disneyland's California Adventure Park that would have been based on the upcoming Oz the Great and Powerful film starring James Franco, and instead the Imagineers have switched their focus to making a new Star Wars themed addition, most likely based on the Yoda film. What do you guys think of Lucasfilm's decision to go with the syntax-challenged Jedi Master for their first stand-alone film? Are you a little bummed that it won't be Boba Fett like we are? We just hope the version of Yoda they go with is more tangible along the lines of Episodes V and VI, and not the CGI version that does flips and crap from Episodes II and III.

S: I could not be more excited about the prospect for a new Star Wars addition to the theme parks. The one that they have now is so outdated and adding the new animation hasn't really helped.

And speaking of Kathleen Kennedy, here's a great profile that The Hollywood Reporter did on her that Andrew showed me that covers how she got Abrams to direct Episode VII as well as her history in movie producing. Love seeing a strong woman like her in Hollywood for this long.


HOW DOES A PIXAR ANIMATOR SEE THE NFL?

A: This here is just a cool little nugget that's been shared over the Twitter-verse this morning. Austin Madison is a Pixar animator who has films like Toy Story 3 and Up on his resume, and apparently throughout this past NFL season and postseason he would draw up a preview of one of that week's games.....through the eyes of a Pixar animator. We highly suggest checking out his the Fantasy Football section of his blog to see all the works of art, but here are some of our favorites.

A: Over the past few weeks, El Mayimbe of Latino-Review had been tweeting about a Marvel movie scoop of epic proportions. It was such a big scoop, he said, that he decided the best way to break the news was to film a video outside of the Marvel offices in New York City that he would then release on the web during the Super Bowl. And darned if he didn't do it and darned if it's not a HUGE scoop. Watch the video below if you want to hear what El Mayimbe's sources are telling him about a huge development in Marvel's plans for Phase 2 and Phase 3. (WARNING: GIGANTIC SPOILERS IN THE VIDEO. DO NO WATCH IF YOU DON'T WANT ANYTHING ABOUT THE AVENGERS 2 OR THE AVENGERS 3 RUINED FOR YOU!)

(We pushed the video down a little bit because even the preview pictures before you hit play might be a bit of a spoiler.)

Okay, like we said above, HUGE spoilers about where El Mayimbe's source within Marvel says that they're taking the franchises. But if you're definitely interested (and if you're still reading this we assume you must be) then hit play, watch the video and then we'll talk about it briefly.


I'm sure there are some of you readers that know a whole heckuva lot more about what El Mayimbe was talking about in that video, because I've never even heard of the Illuminati or Planet Hulk, let alone World War Hulk. But damn if that doesn't sound AWESOME. I'm just glad to hear that Mark Ruffalo will be getting to star in his own Hulk movie, and rumors have it that Joss Whedon will be writing it.

S: The fact that Mark Ruffalo AND Joss Whedon are a part of this gives me great hope. I am actually looking forward to a reboot of the Hulk movies. The last ones have been such a disappointment to me that I feel they can only go up from here.

A: What do you think, readers? Is this as great a storyline as El Mayimbe is making it out to be? We'd love to hear your thoughts in the comments section!

S: And we hope you enjoyed this new little corner of our blog! We always love to hear feedback!